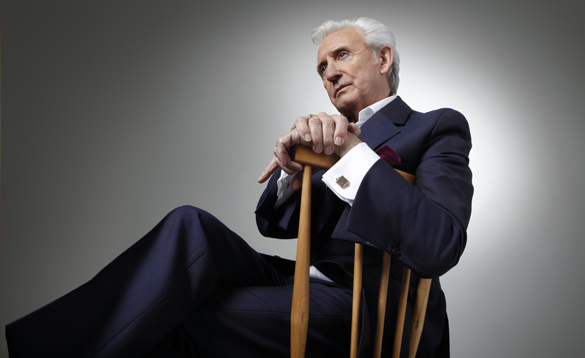 Discovered and managed by Harvey Lisberg, he had a string of top 40 hits including “Las Vegas”, “I Did What I Did for Maria”, “Is This the Way to Amarillo”, “Avenues and Alleyways”, “Walk Like A Panther” and “Drive Safely Darling”. “Is This the Way to Amarillo” had sold more than one million copies by September 1972, and was awarded a gold disc. His early songs were dramatic big-voiced numbers, many of which were written by Mitch Murray and Peter Callander.

He recorded albums regularly throughout the 1970s and made infrequent appearances on the charts. His album With Loving Feeling sold well boosted by the hit single “Is This The Way to Amarillo”. He recorded an album in the United States in 1973 with the record producer Snuff Garrett, which did little to stop his commercial slide. A live album followed which sold relatively better. But by the mid-1970s recorded work became rarer and stage work took preference.

In June 1972, he was invited on the music festival, The Golden Orpheus, then in communist Bulgaria. The concert was recorded and published on vinyl by the government musical company Balkanton. He played the role of Magaldi on the original 1976 album recording of the musical Evita, and sought to represent the UK in the 1976 Eurovision Song Contest, with the song “The Queen of the Mardi Gras” but came third in the contest to select an entrant, behind eventual contest winners Brotherhood of Man.

He had four albums recorded with German producer Jack White, especially their first album collaboration Welcome To My Music, reaching number 7 in the German charts and going platinum. From 1991 to 2002, Christie recorded nine albums especially for the German market.

In 1999, he was the vocalist on the Jarvis Cocker-penned UK Top Ten hit, “Walk Like a Panther”, recorded by the Sheffield band, All Seeing I. His influence on a new generation of singers was further demonstrated when indie pop band Rinaldi Sings released a cover version of “Avenues & Alleyways” in March 2004.

In 2002, “Is This the Way to Amarillo” was used in the TV comedy series Peter Kay’s Phoenix Nights, leading to a resurgence in his popularity. The song was re-released on 14 March 2005 to raise money for the Comic Relief charity, and reached Number 1 in the UK Singles Chart (outselling all the first release’s chart run put together). This led to the biggest sales for a Number 1 single for the whole year, with seven weeks at the chart pinnacle. It also became the longest running chart-topper since Cher’s “Believe”, almost seven years earlier. The single was credited as “featuring Peter Kay”, though Kay only appeared in the video; the audio track was the original 1971 issue. His album, The Definitive Collection also climbed to the Number 1 spot the following week in the UK Albums Chart, breaking records when it also came in at Number 1 on the downloads chart.

A few months later he re-released another single “Avenues & Alleyways”, as a follow-up to the success of “Amarillo”. Although this only reached Number 26 on the UK Singles Chart, it once again out-performed the original release, which reached Number 37 in 1973. Following on from this success, Christie released a single on 5 December 2005, a big band cover of Slade’s “Merry Xmas Everybody”. The B-side contained a big band version of “Is This the Way to Amarillo” and a live recording of “If It Feels Good, Do It” plus videos of the first two tracks. However, it only reached Number 49 on the UK chart.

In 2008 Christie recorded the album, Made in Sheffield, with production from Richard Hawley, and contributions from Alex Turner and Jarvis Cocker. On 20 May 2008, he performed one of the album’s songs, “Danger Is A Woman In Love”, at the Royal Albert Hall with Hawley. 2009 saw the release of the download single, “Every Word She Said”. The same year, Christie also featured in “Heresy”, with his nephew’s band Laruso, which was released on their début album A Classic Case of Cause and Effect.