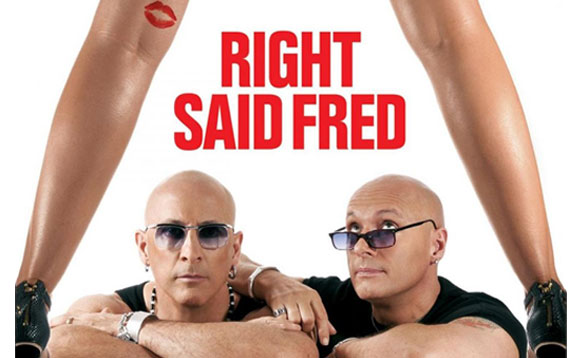 Right Said Fred are as recognisable now as they were back in 1992 when they became the first UK band since the Beatles to reach No.1 in the US with a debut single. That single – I’m Too Sexy – hit No.1 in thirty two countries (although interestingly Bryan Adams ensured it remained at No.2 for six weeks in the UK) and garnered an Ivor Novello Award before further hits like Deeply Dippy (another Ivor Novello) and Stand Up For The Champions (still an NFL stalwart to this day) contributed to the band’s overall haul of twenty million records worldwide. A new album set for release before the end of 2010 firmly cements their place as a Great British Institution (together with Madness and the Kinks) and if that strikes you as a bold statement then you really have a lot to learn.

Hailing from East Grinstead (famous only for being one of the stops on Reginald Perrin’s train journey to and from Sunshine Desserts), brothers Richard and Fred Fairbrass first dreamt of “escape” whilst sneaking off to nearby Gatwick Airport and standing up whenever, ahem, their flight was called. At school Fred noticed a school band called The Game getting all the girls and picked up a guitar whilst Richard couldn’t see the point in being in a covers band and felt similarly inspired. Amazingly, after leaving school the years 1977 and 1978 saw them supporting Suicide (Fred recalls them being “like Sparks but in a bad place”) and Joy Division at places like The Factory in Manchester and Erics in Liverpool. It wasn’t until ten years later, however, that they formed Right Said Fred with Rob Manzoli and Ian Pugsley (the latter went on to work with The Shamen) and wrote their first song “I’m Too Sexy”. The song has often been held up as a comment on the vacuity of the fashion industry but as Richard recalls he was just “dancing about in front of the mirror with my shirt off.” Fred, who writes the bulk of the lyrics, remembers getting off with a girl in a club in Earls Court a week before the single was recorded and her saying “I’m a model – if you know what I mean” and this became a key component of the song’s humility. Indeed, to this day, there’s something about the song that appeals to young and old alike – it’s not esoteric or up it’s own arse, it’s naïve, like a nursery rhyme and not remotely threatening like say Cream by Prince.

“I’m Too Sexy” only garnered a release after Rob Manzoli’s girlfriend, Tamzin, played the song to a radio plugger who said he’d be able to secure a major record deal. He didn’t and instead decided to release the record on his own Tug Records. Incredibly, his faith paid off and the song became a huge success all over the world. But it also created a problem: Right Said Fred weren’t really a band, Tamzin wasn’t really a manager and Tug wasn’t really a record label. Over the next few years, the “band” got in and out of record deals, spent several crazy years in New York and several more crazy years taking their clothes off. Despite all this (like Reggie Perrin’s Grot shops) they just got more successful: “Don’t Talk, Just Kiss” and “Deeply Dippy” (the title comes from a line in Jeeves and Wooster) hit No.3 and No.2 in the UK respectively and slowly the band began to realise they were now part of a business that was spitting them out as fast as it could swallow them whole. Half jokingly, Fred maintains he didn’t realise that records could only go platinum when they coincided with a TV show (their double platinum status was “celebrated” on Noel’s House Party) but it was on another TV show – Top Of The Pops – that a record company executive plonked a copy of the single and album charts in front of them both and suggested that “it doesn’t get better than this.” For Richard, who (for all sorts of reasons) felt absolutely terrible, this felt like some kind of epiphany. There were several more epiphanies, of course (and one involved Fred driving around Coconut Grove in a convertible when the radio announced that Right Said Fred were “America’s Number One”), and in subsequent years Richard was to become downright reclusive (with his partner in England) whilst Fred’s reaction, intensified by serious private problems, was to flee to drugs and alcohol.

Before all that, there were inevitable tales of ordinary madness: in South Africa, diners are forcibly ejected from a restaurant because Right Said Fred would like to dine there (not at their request); whilst holed up at New York’s Paramount Hotel the merest mention on Howard Stern’s radio show that the hotel leaves much to be desired results in a cavalcade of flowers blocking their return to the hotel; on tour in Austria, Richard and Fred allow one of their rabid female fans and her fourteen year old daughter to meet them in the VIP backstage area only to discover that the mother wants the pair of them to deflower her offspring any minute now – and what’s more, upon his arrival, the father’s right behind the idea; in New York again, at the height of their infamy, notorious porn star Mark Stevens invites Richard and Fred up to his enormous apartment in the Chrysler Building. With thirty television sets simultaneously spitting out porn and gel up to his armpits, Stevens starts stroking his cock and explaining he thinks the brothers might prove the perfect “foil” for the two Asian girls sitting opposite. He’s hung like Iggy Pop, of course, and with crack psychosis already imbued, Richard and Fred could be forgiven for resorting to one of the oldest newspaper tricks in the book – they make their excuses and leave.

Of course, Right Said Fred have always been something of a contradiction, a fact that Fred touches on when he says: “a part of the particular perception of Right Said Fred is our own fault. In the early 90s we simply did what we were told. If they said ‘Take off your shirts‘ we’d do it and if they told us ‘we want “I’m Too Sexy 2“ und “Deeply Dippy 3“‘, we wouldn’t fight every battle to the last breath. That resulted in the fact that many people don’t know our albums. They settle for the hit singles and can’t know that we write quieter, less party-compatible songs too. Interestingly, in the US our records are listed under ‘Alternative’, while in Europe they register under ‘Pop’ or ‘Easy Listening’. But we don’t lose sleep over that – it’s a fact that an artist in the end cannot control. All you really have as a musician is the commitment to your songs.“ Or, as Richard suggests, “musicians aren’t meant to go down the gym, they’re supposed to be like Pete Doherty!” He continues, “Writing a gag is actually a serious business but jazz musicians treat the standards far too seriously – they are people’s songs and were meant to be fun.” And it’s interesting to note that whilst “Sexy”was kept off the top spot by Bryan Adams “Everything I Do” for six weeks, another, perhaps more “classy” song, Ultravox’s “Vienna” was kept off the top spot for five weeks by Joe Dolce’s “Shaddap You Face.” And which was the less contrived? Well, “shaddap you face” just happened to be what Dolce’s mother used to say to him on a daily basis whilst Midge Ure had never been to Vienna.

Prior to Sexy and Deeply Dippy and Don’t Talk, Just Kiss, Right Said Fred had worked with Dylan, Bowie and Mick Jagger but it’s subsequently, with albums like Up (seven million copies) and Sex And Travel (one million copies) and more recently with songs like “Stand Up (For The Champions) and “You’re My Mate”, that Richard and Fred have really made their mark on the pop firmament. Naturally, Richard has also given away all his Novellos(“it’s the Groucho Marx thing – I wouldn’t want to be a member of a club that would have me as a member”) but new songs like Obvious (about falling in love), Julianne and We’re All Criminals (about the fact that children can’t play conkers in the school yard anymore and you can’t step out of your front door without breaking the law) are undoubtedly set to trouble the scorers all over again. The “band who were never a band” are due to release a new album by the end of 2010 but, before that (and under the moniker “An Evening With Right Said Fred), they’ll be performing some of their greatest hits, some newer, more poignant, lovelorn ditties, as well as regaling some rather surprising anecdotes (that are set to make your hair curl) at smallish venues around the UK. It’s a marriage made in heaven:Right Said Fred – so English, you could scratch the surface and swear they taste of sausages and jam.