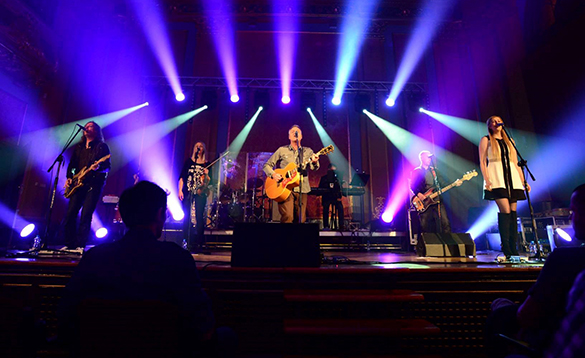 Red Box were formed in 1981 by Simon Toulson-Clarke and Julian Close at the University of Westminster.

Regularly selling-out shows at the Marquee and Moonlight clubs while still students, the band signed to Cherry Red Records in 1983 and released debut single Chenko (Tenka-Io) which was hammered by Janice Long on Radio 1 and led to Seymour Stein of Sire Records signing them in 1984.

The band quickly transferred to the WEA label for UK & European releases under the A&R direction of Max Hole and in the late summer of 1985 scored their first UK hit single, ‘Lean On Me (Ah-Li-Ayo)’ which reached number 3 in the UK Top 40 and spent over 4 months on the chart. A huge radio record globally, the song reached number 1 in five countries and the top 5 in a further twelve, giving worldwide exposure to the band.

The second single ‘For America’ outsold ‘Lean on Me’ worldwide, reaching number 1 in six countries and the top 10 in most others including the UK, where it spent twelve weeks in the chart peaking at number 9.

In 1986 Red Box released their debut album ‘The Circle & the Square’, mixing traditional musical styles – brass ensembles, choral music, orchestral arrangements and vocal chants – with modern pop.
The album received praise for its evocative lyrics and global political intelligence and is notable for introducing ethnic rhythms and elements of World Music into the 1980s pop milieu.
The ‘Circle & the Square’ has since become a cult album.

The band recently completed their fourth album ‘Chase The Setting Sun’ which will be released in 2018 and are currently putting tour dates in for Europe, where they continue to enjoy a strong following, most particularly in Poland.