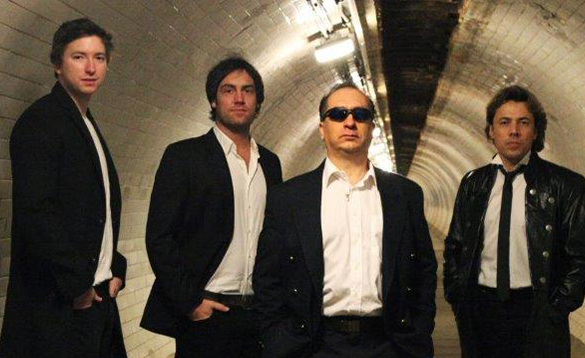 In 1981, a 23-year-old, enthusiastic Andy Kyriacou, joined an unknown band called Modern Romance. Within a short period of time the single “Everybody Salsa” was shooting up the UK charts. One invite to appear on Top Of The Pops later and the band was on the way to becoming a household name.

Over the next 4 years, the band had several more UK hits, attaining Silver and Gold status albums. Their unique style of Salsa influenced Pop attracted fans from all over the world, resulting in hits in Italy, Spain, France, Greece, Holland, Sweden, with a No.1 single in the Far East and even a Gold album in South America!

The band went their separate ways in 1986.

Several years later Andy contacted Dave Jaymes, founder member and owner of the name, with a view to dusting off the cobwebs. Following this meeting, Andy relaunched the band in 1999 and he hasn’t stopped working since.

With the desire for 80’s music reaching new levels in recent times, Modern Romance have appeared in countless radio, tv and press interviews. They have performed live at huge shows, to very appreciative audiences. Although Andy has long been accepted as the face of Modern Romance, for which he admits he will be eternally grateful, he points to his ubiquitous band members and their skilled input – some having performed with Jessie J, Van Morrison, Level 42, Jamiroquai, Peter White, Rag ‘n’ Bone Man and a host of others. He is the first to point out that they more than hold their own, musically.

With regards the live performances, Modern Romance have appeared on the roster of several 80’s based, branded events, such as “Let’s Rock” (all over the UK), Rewind, Retrofest, Here & Now, (again, wide UK coverage) and also yearly, one-off festivals, such as Happy Days Festival, Sunshine Festival, Chilfest, etc. The list is almost endless. The band are also regulars on the Butlin’s circuit, which has embraced the 80’s revival. Trips abroad have also featured, and the band are currently negotiating a possible trip to Dubai.

In 2019 Modern Romance released their first single since the 80’s – a song written by Andy, called “Rhythm Is My Lover”. Later that year, a new recording of “Tarzan Boy” was released in the USA, with the re-mix storming into the US dance charts.

Andy is currently transcribing the diaries he kept in the 80’s with a view to publishing them as a book. This will feature some great references to other 80’s acts, funny little stories will be retold, and there will also be the obligatory “interesting reading” one should expect from a book written by a member of a high profile 80’s pop band, drawing from a very honest diary. Say no more!!

Note:
Andy has expanded his horizons and when he is not doing gigs, he delves into the field of journalism. This work as a “celebrity writer” has taken him to many countries, including: Luxemburg, Belgium, Portugal, Italy, Tunisia (5 times!), and he was even commissioned to write about his ride across the Austrian Alps into Switzerland, on a motorbike (one of his passions!). If you’d like to read some of his articles, please click on the link below, where he has set up a page showing a cross-section of his work, concentrating on food and travel, but occasionally dealing in other subjects.
www.AndrosJournalist.com