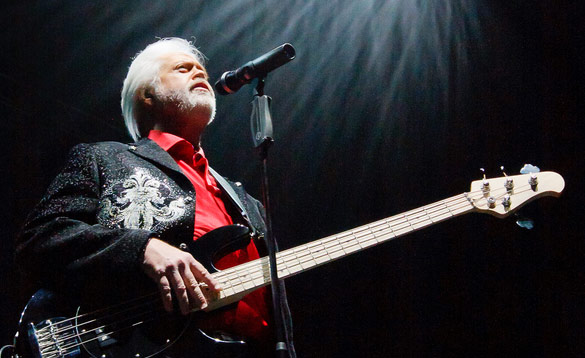 Merrill as a member of the original “boys band” and lead singer for the famous Osmond family, it’s his incredible voice, you hear on hits such as One Bad Apple, Down By The Lazy River, Love Me For A Reason and many other countless hits. In collaboration with his brothers, Merrill has written the music and lyrics for five number one hits records and sang lead to the group’s collective 27 gold records, many of which he shared the production credits. Collectively the Osmonds have produced 47 platinum and gold records. In the history of the rock era, no other recording artists have earned as many gold records in one year as the Osmond family. Not even the Beatles were able to receive eleven gold award certificates in one year, but the Osmonds still hold that record today. Other hits include Crazy Horses, Let Me In, Going Home, The Proud One.

Merrill has received two People’s Choice Awards, four number 1 Billboard Hits, and two Grammy Award nominations. His entertainment career has spanned over 45 years and his remarkable achievements has also earned him notable recognition and honorable titles such as one of the Ten Outstanding Men 1982 for the United States Jaycees.

Merrill Osmond’s powerful influence in the music and entertainment industry leaves a legacy that embraces principles that strengthens families and provides us with a deep love for God and his Country. He is deeply committed to the ideals that have powerfully changed the view of the role we play in the world around us. His talent as a strong leader has moved him into other productions serving as the executive producer of the “Donny and Marie Show” on ABC-TV from the years of 1976 thru 1979, “The Roy Clark Special” and “The Osmond Christmas Family Specials”. In addition he has produced over 90 teleplays and scripts for television.

Merrill’s extraordinary leadership skills have been requested by both President Ronald Regan and President George Bush. Both Presidents have requested his expertise in producing two prominent events, “The Making Of An Inauguration” for President Ronald Regan, and on behalf of President George Bush’s Inauguration on 1989, “The Quincentennial Inaugural Ball”. One event that was special to his heart was, “Operation Family Front”, as special benefit and television program that provided for the families of servicemen in Operation Desert Storm in 1991.

Merrill Osmond’s personal aspiration is to recognize and inspire divine connections that lead individuals to their greatest potential. The powerful strength of his commitment moves others to action. His true intentional love for the lives he touches shows up in his philanthropic work as the co-founder of the Osmond Foundation, which produces “The Children’s Miracle Network Telethon”. He has been awarded “Honorary Chairman” and “Medalist”, in his work for the Utah Special Olympics. Merrill has received many awards for his work with the youth; his passion to serve others comes from his devotion to God and his fellow man.