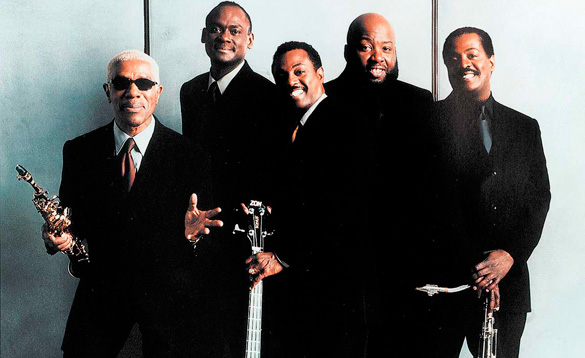 Kool & The Gang, the group with a sound that has influenced the music of three generations, has sold over 70 million albums worldwide. Songs like Celebration, Cherish, Jungle Boogie,Summer Madness and Open Sesame have won two Grammy Awards, seven American Music Awards, 25 Top Ten R&B hits, nine Top Ten Pop hits, and 31 Gold and Platinum albums. Kool & The Gang have performed continuously for the past 30 years, longer than any R&B group in history. Their ticket to longevity has been the evolution of their music.

In 1964 Khalis Bayyan a.k.a. Ronald Bell and his brother, Robert “Kool” Bell, joined Jersey City neighbourhood friends Robert “Spike” Mickens, Dennis “Dee Tee” Thomas, Ricky Westfield, George Brown and Charles Smith to form The Jazziacs. Legendary artists John Coltrane, Miles Davis, James Brown and Sly and the Family Stone, influenced the group’s unique sound which merged the complexity of jazz, the feel good sound of soul, and the street edge of funk music. In exchange for sandwiches and performed alongside rising stars Bill Cosby, Richie Havens and Richard Pryor. While building their fan base in New York the group needed to find the perfect name to represent their sound. They went through a series of name changes including The New Dimensions, The Soul Town Band and Kool & The Flames. To avoid any confusion with James Brown’s “Famous Flames” they decided to make their recording debut asKool & The Gang.

In 1969 Kool & The Gang released their self-titled album. It was the introduction to a theme; music is the message, that Kool & The Gang stands by today. The instrumental album was an expression of their deep love of music. It was also an introduction to their signature sound; fierce horn arrangements, created by Khalis, Dee Tee and Spike. Their debut album spawned their first Billboard R & B charted single Kool & The Gang and later Let The Music Take Your Mind.

In 1970, their audacious sophomore set Live At The Sex Machinepeaked at #6 on Billboard’s R & B chart. Kool & The Gang’s first live album showcased the group’s musical growth and their lyrical expression of spirituality, unity and the responsibility of mankind. This album produced three hit singles: Funky Man, Who’s Gonna Take The Weight, and I Want To Take You Higher.

From 1971 to 1973 Kool & The Gang released four albums The Best of Kool & The Gang Featuring The Penguin, Kool & The Gang Live at PJ’s, Music is the Message, and Good Times. The group’s big break came with the release of Wild & Peaceful in 1973. This album was Kool & The Gang’s first certified gold album reaching number 6 on the Billboard’s R&B charts and number 33 on the Pop charts. The “wild” side of the album produced three party anthems, Funky Stuff, Hollywood Swinging, and the million selling single Jungle Boogie. The “peaceful” side of the album continued their quest for peace and unity with songs like Heaven At Once, and the title track Wild & Peaceful.

Riding high from the success of Wild & Peaceful, Kool & The Gangreleased the most spiritual album in their catalogue, Light of Worlds, in 1974. Light of Worlds represented a spiritual reawakening. With a cutting edge synthesiser sound, the album was a testament to change. For the group it represented a change in the way they ate, thought and lived each day. The album produced the number 1 R&B single Higher Plane and the classic hit Summer Madness. Summer Madness was featured on the Grammy Award winning movie soundtrack Rocky.

In the late 70’s disco music became the rave. Instead of jumping on the disco bandwagon Kool & The Gang remained true to their “message” releasing two hit albums in 1975: Spirit of the Boogieand Love & Understanding.

Early in 1976 talented keyboard player Ricky Westfield left the group and formed his own band, North East South West. Although they remained lifelong friends, this marked the end of the musical collaboration between the seven original Kool & The Gangmembers.

As the disco era ended and a new decade began, Kool, Khalis, George, Dee Tee, Charles and Spike realised the group’s evolution was necessary in order to survive the turning tide in the fickle world of music.

In 1979, Kool & The Gang re-emerged on the music scene with a new sound and a lead singer, James JT Taylor. A former school teacher from Hackensack, New Jersey, JT added his smooth, sultry vocals and charismatic personality to the group’s new polished sound. The result was Kool & The Gang’s first platinum selling album. Ladies Night was produced by the legendary Pop/Jazz musician Eumir Deodato and the title track held the number 1 position for three consecutive weeks on the R&B chart and peaked at number 8 on the Pop charts. It was followed by Too Hot which reached the number 3 position on the R&B charts and number 5 on the Pop charts. What followed was a landmark in Kool & The Ganghistory.

In 980, Kool & The Gang released the double platinum selling album Celebrate. The international hit single Celebration remained at number 1 on Billboard’s R&B charts for six consecutive weeks and was the number 1 Billboard Pop single. Celebration became the theme song for some of 1980’s memorable moments including the return of the American hostages from Iran. This phenomenal single is still played at joyous occasions all over the world.

Kool & The Gang produced hit after hit between 1981 to 1983. The albums Something Special, As One and In The Heart gave the world the hit singles Get Down On It, Take My Heart, Lets Go Dancing, Joanna and Tonight.

In 1984, Kool & The Gang released their second multi-platinum album Emergency. The first single Misled went straight to number 10 on Billboard’s Pop charts. Cherish the number 1 R&B single and number 2 pop single, echoed a familiar Kool & The Gang theme: life and love. Fresh a street expression exposed to pop culture was a number 1 R&B single and a number 9 Pop single. The success ofEmergency solidified the group’s international superstardom. They had global commercial endorsements, supported countless charitable causes, and were the only American group to participate in Band Aid’s 1984 Do They Know It’s Christmas project for famine victims in Africa.

1986 marked another departure by one of the group’s original seven. Trumpet player Spike Mickens left the band due to poor health.

Kool & The Gang released Forever in 1987 which featured the hit R&B and Pop single Stone Love.

It was that same year that JT decided to fulfil his dream of becoming a solo artist and actor. He released three solo albums on MCA. JT performed the hit single Foerever, a duet with Regina Belle for the movie Taps. He made his big screen debut co-starring in The Mambo Kings with Antonio Banderas. Recently he made his theatre debut in the touring production of Raisin.

With the close of the 80’s music began to change and so did the face of Kool & The Gang.

The music of the 90’s represents Generation X with Hip-Hop, New Jack Swing, and Grunge. New music technology ushered in the use of “samples”. This popular tool for a new generation of producers takes the creative voice of rap and fuses it with the rhythm of funk and soul. Kool & The Gang’s classic hits have become a mainstay for rap and hip hop artists. In addition they continue to entertain audiences worldwide through extensive touring. They made several historical performances in Russia and were the first African American group to perform in Taiwan.

Khalis Bayyan took time off from touring to devote his energy to writing and producing for the group. He also began developing another generation of talent. In 1990 he met Lauryn, Wyclef and Pras, a group of talented teenagers from the Oranges in New Jersey. IN Khalis’ studio B at the famous House of Music in West Orange, New Jersey the group recorded their first album. Ruffhouse, Columbia released Blunted on Reality in 1995 and the multi platinum-selling artists The Fugees were born.

In 1996, Kool & The Gang reunited with JT and released their thirty fifth Album State Of Affairs on Curb Records.

In the mid 90’s & 00’s nostalgia for 70’s and 80’s music in the US, Europe and Japan began to explode. Kool & The Gang’s classic single Jungle Boogie was featured on the multi platinum soundtrack Pulp Fiction. Classic hits like Ladies Night, Hollywood Swingingand a host of others were revived with a Hip Hop twist from Rap artists such as Mase, Puff Daddy, Coolio and Will Smith.