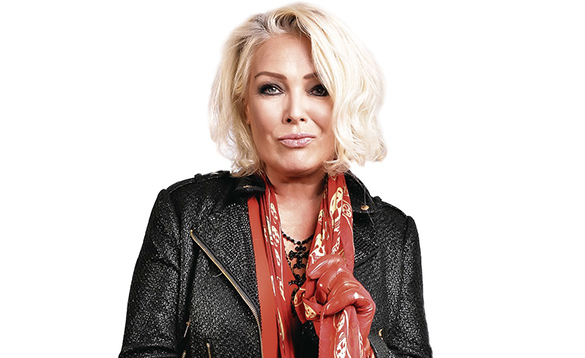 Kim Wilde was born on 18th November 1960 in Chiswick, West London. At the age of eight, Kim moved with her family to the Hertfordshire village of Tewin where she attended the local Primary School, before moving onto Presdales School in Ware.

In 1979 Kim completed a one-year foundation course at St. Albans College of Art & Design as a precursor to an Art Degree, but, in 1980, she signed to Mickie Most’s RAK Records and her first single release, Kids In America, was to change her life. The world-wide hit paved the way for a recording career which yielded ten hit albums and in excess of thirty hit singles, bringing success in every major record market. Highlights included performing to over 2 million people in a five-month European stadium tour with Michael Jackson and an American Number One with You Keep Me Hanging On.

In 1983 Kim was voted best British Female Singer at the prestigious BPI (Brit) Awards and has received nominations on two further occasions.

In 1994 a brief appearance as stand-in co-presenter of Channel 4’s The Big Breakfast proved an enjoyable diversion, whilst in 1995 Kim made her West End stage debut playing the female lead for twelve months in a successful production of the musical, Tommy.

Kim has had over 24 top 20 hits and received over 100 gold, silver and platinum discs. Some of these songs include: Kids In America, Chequered Love, Cambodia, View From A Bridge, You Keep Me Hangin’ On, Another Step (Closer To You), You Came, Never Trust A Stranger, Four Letter Word and If I Can’t Have You.

Kim Wilde. Mention her name and people’s eyes light up. The blonde singer with the siren voice is after all one of pop music’s most dazzling stars. For years she has held the record as England’s most successful female pop star ever. The French consider her the ‘Brigitte Bardot of Rock’ and her German fans still venerate her as the sexiest glamour girl to come out of the eighties. Even today megahits such as Kids In America and Cambodia are guaranteed to rock the dancefloor.

Some time in the planning, Kim Wilde’s long-awaited comeback is now finally underway. The singer has toured frequently over the last three to four years, naturally matured, but as stunningly attractive as ever. Her thrilling cover version of Steppenwolf’s Born To Be Wild, released in 2002, was just a sneak preview. Three years ago she and Nena recorded the classic Anyplace, Anytime, Anywhere, which promptly shot to the top of the charts throughout Europe. Kim Wilde was back in all her glory and with renewed zest – with studio album number ten: Never Say Never, her first regular LP for more than ten years.

The other Kim Wilde classics on Never Say Never which smooth the transition between her former meteoric career and her artistic status quo are also something more than lusciously nostalgic candyfloss. You Keep Me Hanging On, that ultimate soul number by the Supremes, which saw Kim Wilde top the US charts for the first time in 1986 has been turned into yet another fantastically atmospheric duet with Nena – this time with the career focus in reverse. View From A Bridge, You Came, Four Letter Word and a Paul Oakenfold remix of Cambodia round off a highly polished trip down memory lane, recalling the greatest moments of the eighties. The new songs featured on the album are a welcome bonus, revealing Kim to be in fantastic form. Perfect Girl is true to its name: pop song perfection. I Fly, is a no-frills rock number with riffs that really fly, reminiscent of Blur’s ‘Song 2’. The gardening. Kim attended courses in horticulture and garden design at the prestigious Capel Manor college and was discovered by television scouts. But it wasn’t just with TV shows such as ‘Better Gardens’ and ‘Garden Invaders’ that she was destined to create waves in her homeland – she also turned author. In spring 2005 her first book, ‘Gardening with Children’, was published, A second was released recently.