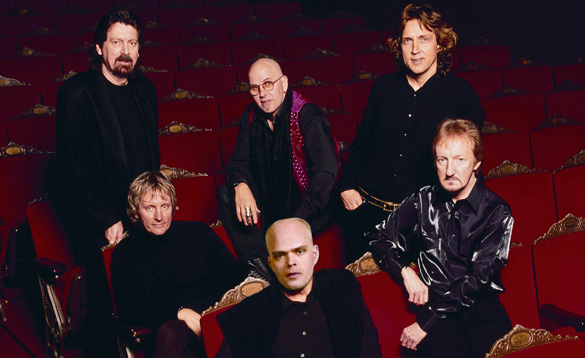 With a pedigree that stretches back over many years, with roots reaching to the 70’s and 80’s with Electric Light Orchestra, the 90’s with ELO Part II and from 2001 to the present as The Orchestra, heralding a continuing era of unparalleled symphonic rock!

Following Bev Bevan’s retirement at the end of 1999 and their triumphant sell-out concerts at London’s Royal Albert Hall and Manchester’s Bridgewater Hall, Mik Kaminski, Louis Clark, Kelly Groucutt, Eric Troyer, Parthenon Huxley and the latest recruit Gordon Townsend regrouped as The Orchestra. The new name acknowledged each member’s illustrious former membership of theElectric Light Orchestra and/or ELO Part II but also forges ahead a future utilising the spectacular symphonic rock sound for which they are unequalled.

The completion of their first stunning album No Rewind signaled the band’s rebirth in a most positive manner. Produced by Eric Troyer, Parthenon Huxley and Jim Jacobsen (eels), No Rewind was recorded without a single penny from any record label – admirable and courageous when you consider how today’s music industry operates. 10 tracks and more were recorded in studios in Los Angeles and New York over a two-and-a-half year period during breaks in the band’s hectic worldwide touring schedule. Recording sessions were booked around shows, guaranteeing that band members would be in the same city at the same time. It’s not easy to”get together and jam” with a bassist and violinist domiciled in England, a keyboardist in New Jersey, a conductor in Ohio and both guitarist and drummer in Los Angeles.

Of course, the album turned out brilliantly… With each band member contributing in equal measure, No Rewind contained many highlights across its 10 tracks: Lou’s strings in the outro of the title track, Mik’s soloing in Let Me Dream; Eric and Kelly’s vocal harmonies on Can’t Wait and Twist & Shout (yes, that one); Gordon’s fill before the final chorus of Over London Skies; the solo Hux shares with Mik during Say Goodbye… and much more. The a capella part of Before We Go includes an exquisite guest vocal appearance by Jeffrey Foskett of Brian Wilson’s band.

Eric Troyer, brimful with an infectious and almost overwhelming enthusiasm, sums up just how positive The Orchestra have been in creating No Rewind: “I have to say that all of the former ELO members showed an amazing adaptability, sparkling creativity and an adventurousness spirit in their contributions to the new album. We’ve stepped into new territory, inspired by the new and young blood in the band (Hux and Gordon). I think this is some of the best work of Lou’s career and that goes for Mik too (check his inspiring writing and violin work on Let Me Dream and others). Kelly, who is still a killer vocalist and writer (Before We Go) provides the historic ELO-edge to the sound and creativity of the background vocals on all tracks.”

The end of 2007 saw the departure of Parthenon Huxley and the return of former ELO Part II member Phil Bates, although there was a transition period where depending which country they were performing in depended who you got on lead guitar and vocals until work visas got sorted out.

The following year with Phil back on guitar and vocals, the band did two UK tours and an East European tour with a few one-off gigs scattered here and there throughout the globe. 2008 also saw the “tour only” release of a live CD recorded shortly before Hux left the band. This was recorded in Vilnius in Lithuania at the 8000-seat Phillips Arena with Lithuania’s National Symphony Orchestra.

Things were starting to get busy for The Orchestra when tradgedy struck early the following year. February 2009 saw the band perform to a sell out concert in Berlin but within hours of returning home, frontman and former ELO member Kelly Groucutt collapsed of a massive heart attack and died the following day. The funeral took place at a packed church in Coseley in the West Midlands, UK.

With a UK tour already booked for May the band decided to go ahead with the tour. They recruited Glen Burtnik from the USA to stand in for Kelly. Glen having previously played with ELO Part II in 1998 when Kelly was unavailable due to illness. He quickley established himself within the band.

2009 has also saw German bassist Ralf Vornberger perform in Israel when Glen was unavailable due to other work commitments booked before he joined the band. With more dates being scheduled for the second half of 2009 for the UK and Eastern Europe, The Orchestra were kept quite busy during 2009.