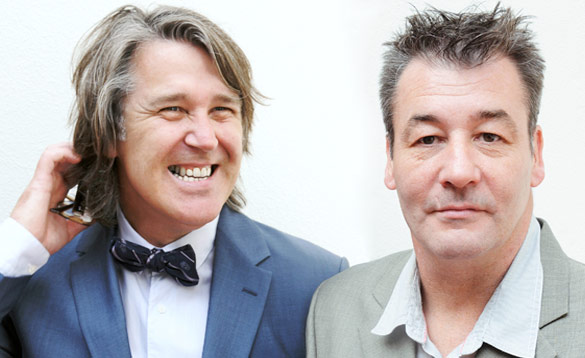 Liverpool, England, 1979 is where it all began. Gary Daly and Eddie Lundon started to work together at the age of 18. Only two years later they came out with their debut single African and White which was supported by Inevitable Records. A second single followed, Scream Down At Me a year later.

By this time, China Crisis was beginning to start a stir and Virgin Records were quick to pick them up. The band then re-released African and White and it broke into the UK charts. Their album, Difficult Shapes and Passive Rhythms came soon to follow reaching number 21 in the charts, and if that was not enough, their first single came from the album Christian hit number 12.

China Crisis began to really take off. They started to concentrate on the creation of their second album Working With Fire And Steel. Once again, their songs broke the charts, especially Wishful Thinking which made a definite impact at number 9. Wishful Thinking became just the tight song to open up the gate for what arguably could be their best album.

For the album, Walter Bccker the founding member of Steely Dan stepped in to produce. Flaunt and Imperfection was released in the spring of 1985 and in no time rose the charts to number 9. Not only did the album go through the roof, many hit singles were spawned from it including two of which made it in the top 20: Black Many Ray number 14, and King In A Catholic Style number 19. A video was put out in the fall of 1985 called Showbiz Absurd. This video highlighted many of their greatest hits like Christian, Working With Fire And Steel, Wishful Thinking, Black Man Ray and many others.

For the next album, Brian McNeill came in on the keyboards, as well as two new producers, Clive Langer and Alan Winstanley. What Price Paradise was released in November of 1986. Arizona Sky and Best Kept Secret were two singles that came out which hit the charts at number 47 and number 36.

After What Price Paradise the band took a little break from all the action. They did not resurface onto the scene until three years later in 1989 when they put out another album called Diary Of A Hollow Horse. Walter Bccker came back for this album, and recorded most of the songs. Mike Thorne also came in for a couple as well. China Crisis then went on tour with the support act “The Highlanders” right after their release of Diary Of A Hollow Horse and their two singles from the album Saint Saviour Square and Red Letter Day.

So where is China Crisis now? What have they been up to? Well they have been doing gigs around the UK and they are also writing new material. It has difficult for the group to get together because of outside commitments, but finally last year, they managed to put down some tracks. They are awaiting a release of their new album. They have also appeared on the Here and Now Tour in April 2002.