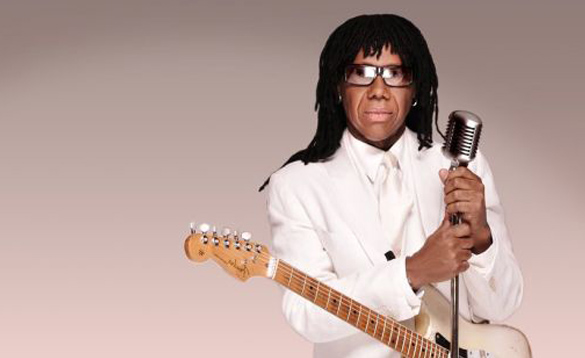 Co-founded in the late seventies by Rodgers and bassist Bernard Edwards, Chic distinguished itself with uncanny musicianship and a distinctly identifiable soul-funk sound, The band changed the course of disco and pop music forever, and their songs became anthems, as did the duo’s works for Sister Sledge’s “We Are Family” and Diana Ross’s “Diana” – featuring I’m Coming Out and Upside Down.

The Monumental concert would be Edwards last. He died unexpectedly in his hotel room just after the performance.

“Though the producer in me wanted to enhance the production of a raw, live performance, I decided to maintain the purity and reality of Bernard’s last performance”, stated Rodgers. “Chic Live at the Budokan” is thus a final tribute to him.

Long an innovator within the music industry, Rodgers established Sumthing Distribution and Sumthing Else Music Works in order to gain control over his work and over projects her cares about. Rodgers is the first African-American to own a full service distribution network.

Rodgers music has left a permanent mark on American culture for over two decades. He began his career as a guitarist, incorporating various styles and influences, before forming Chic. After Chic disbanded, he continued to develop as a songwriter and producer.

Rodgers has produced innumerable #1 records and many of the biggest albums of all time including David Bowie’s Lets Dance, and Madonna’s Like A Virgin, as well as albums for Duran Duran, INXS and Mick Jagger. He has also scored numerous films including Thelma and Louise, Alphabet City, Soup for One, The Fly, Earth Girls are easy, Coming to America, The Flintstones and Beavis and Butthead as well as producing the soundtrack recordings performed by Peter Gabriel, Kim Carnes, Teddy Pendergrass, the B-52’s, Slash, Bob Dylan, and Seal.

Chic have won countless awards, including three Grammys. They were recently honoured in Japan as the JT Super Producer and were recently featured on VH-1’s “Where are They Now?” Two recent No. 1 hits – Will Smith’s Getting Jiggy With it and Notorious B.I.G’s Mo Money Mo Problems features samples of Rodgers early work with Sister Sledge and Diana Ross, while the soundtrack for the film “Last Days of Disco” features five of Rodgers songs.

CHCI AS WRITERS / PRODUCERS / PERFORMERS FOR OTHER ARTISTES

We Are family: Sister Sledge smash LP, includes We Are Family and He’s The Greatest Dancer
Diana Ross: Diana Ross’s groundbreaking LP with hits Upside Down and“I’m Coming Out
Why – Performed by Carly Simon, 12”remix