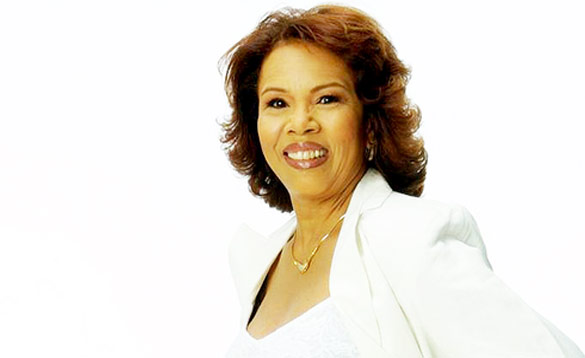 Everybody knows Candi Staton. From the hen party disco favourite Young Hearts Run Free to hazy rave memories of hearing the bootleg mix of You Got The Love at some sweaty club, Candi Staton has a voice that has tracked the times, that has followed us from Sixties soul to acid house and out again the other side.

But Candi is more than an anonymous disco diva. Since disco died its spangly death at the end of the Seventies, Candi has been keeping her hand in, continually recording her twin loves of gospel and country music. At home in Atlanta, Georgia, Candi is now better known as the celebrity producer and presenter of her show “Say Yes” on a gospel TV channel than for her wild days of disco. Candi spends her time reaching out with the Gospel to America’s violent gangs, drug and alcohol abusers, of her work, she says “We sing the kind of gospel they’ll relate to, contemporary street gospel.”

Music runs in Candi’s blood. At five she was singing in her church choir, before breaking out into secular pop with her 1969 hit I’d Rather Be An Old Man’s Sweetheart (Than a Young One’s Fool). She was nominated for a Grammy for her soul classic of the country standard Stand By Your Man. “That was the first time I realised I was considered famous,” remembers Candi. “At the Grammies, with people queuing to get my autograph, in front of people like Diana Ross.”

In 1974 she signed to Warner Brothers, starting a relationship that would last until the Eighties, and would see her billowing silk voice churning out disco classics like Young Hearts Run Free and the New York gay anthem When You Wake Up Tomorrow. Like all good disco she sang of love and dancing, but when these records hit their high point, as the churning backing tracks hit a point of perfect symbiosis with her piercing ecstatic voice, her gospel background added in a stunning sense of optimism. Candi’s songs have inspired the thoughts of generations, that somehow the act of dancing would make the world a better place.

“Disco?” she asks now. “That’s all I did for 13 years. I was totally into nightclubs. I did practically every venue you can name. There wasn’t a disco club from Miami to Texas that I haven’t played. Studio 54, The Paradise Garage. I was on stage with Gladys Knight And The Pips, Teddy Pendergrass, James Brown. I was on stage with all of them. I loved it. It was a very special time for me. I like joy, I can’t stand to be around depressed people.”

The Nineties has seen Candi reaching out to an audience often not even born when she first saw the inside of a recording studio. In 1990 Candi’s career took an unexpected turn when the DJs at London’s fashionable house club Solaris mixed an acapella of her early 1986 club hit You Got The Love over a Frankie Knuckles record. It sounded fresh, so they recorded a primitive bootleg mix. Within a year it had been signed and turned into a massive top 5 chart hit.

“First of all, before I heard the mix, I was like how dare they!” Candi starts, “When I heard it I didn’t even recognise it, to be honest. But it became big because it’s a great song.” You Got The Love went on to become an international hit, and was re-released in 1997, smashing into the UK charts at number 3. Now Candi has a new album on React that sees her returning to the euphoric soulful dance music that made her name in Britain.

More than just a dance album, Outside In sees a host of fresh material from Candi, also combining her talents with Frankie Knuckles on What Do You Want From Me, and Billie Ray Martin who wrote You’re Still The Lightening. The first release from the album was Candi’s own version of Jeremy Healey and Boy George’s Ibiza classic, Love On Love. The re-release of her classic 70’s hit Young Hearts Run Free set the dance floors alight this Summer and entered the national top 10 on release.

The voice is back. Candi’s sweeter than ever.