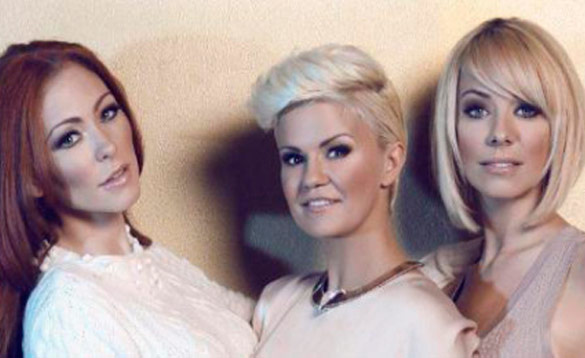 For many years Atomic Kitten flew the flag as by far the biggest girl group in Europe selling in excess of 8 million records and selling out arenas globally. As one of Britain’s most successful exports it’s fair to say the UK pop scene has sorely missed Atomic Kitten.

The Kittens achieved massive chart success and easily outsold their peers including Sugababes and Girls Aloud across the world. One little known fact is that as their solo projects continue to achieve considerable success in the worlds of TV, media and music the 3 Kittens still continually get together for one off charity and corporate shows across the world.

Atomic Kitten have a two-part history. AK*2 began in January 2001 when Jenny Frost joined the two original Kittens: Liz McClarnon and Natasha Hamilton after the third part of AK*1, Kerry Katona, left the group to become a mum. The AK*1 story begins over a year earlier…

Atomic Kitten arrived on the scene in late 1999 with their debut single Right Now which jumped straight into the UK Top 10, it eventually spent 7 weeks in the Top 40 at the end of 1999 and defied the critics who thought releasing a debut at such a busy time of year was a big risk. Their follow-up – the infectious and melody-laden See Ya, released in March of 2000 – crash-landed into the charts at number 6. The track perfectly picked up the lyrical theme that courses through every Atomic Kitten song. Having started the ball rolling so emphatically here in the UK, the girls added to their success with barnstorming TV and radio performances abroad. See Ya was used to front Fiat’s campaigns in France and Italy and was also heard in cinemas worldwide in the smash hit movie Bring It On.

Throughout 2000, AK*1 enjoyed hugely successful visits to Japan where the band recorded a TV ad for a leading brand of chocolate. They were also chosen as the “face of MTV Asia” at the forefront of MTV’s new campaign which began in Beijing in June and saw the Kittens reaching an incredible audience of 675 million people with a roof-raising performance on the MTV Asia awards alongside Aqua and Alanis Morissette.

The band’s third UK single I Want Your Love saw AK*1 achieve their third consecutive Top Ten hit. An incredible TV campaign and the main support slot on the huge Steps tour helped the single to firmly establish the band as one of the most successful and exciting pop groups of 2000. At the end of 2000, the girls won the prestigious Best Newcomer Award at both the Smash Hits Poll Winners Party and the Disney Awards.

The beginning of 2001 and Atomic Kitten were about to launch Whole Again when founding member Kerry Katona announced her pregnancy with fiancé Bryan McFadden. Through much discussion, the girls all decided that in order for Kerry to relax and have a stress free pregnancy she would step down from AK*1. During the weeks before Kerry’s announcement the girls had been working fast behind the scenes to add another Kitten to the litter. The natural choice was their good friend Jenny Frost, 23, also from Liverpool. Jenny had been a member of the girl band Precious – playing many of the same shows and tours that AK were performing at. Jenny officially joined the band in January 2001 and AK*2 was born.

Atomic Kitten’s fans stood by the girls throughout this transformation, and catapulted the new look Atomic Kitten and Whole Again straight in to Number One. The single stayed at the top of the charts for an amazing four weeks, beating off competition from U2 amongst others, and breaking a Guinness Record in the process. It took Liverpool to the top of the global list for the city with the most number 1s ahead of Detroit while Atomic Kitten became the girl group with the longest stay in the UK top 40 beating The Spice Girls record for Wannabe.

Whole Again remains one of the biggest selling singles of the last decade in the UK as well as being an international smash and Kitten fever soon spread across Europe, including a fantastic six weeks at number 1 in Germany. The song was a #1 in 19 countries.

Following on from the phenomenal world-wide success of Whole Again, pop’s feistiest trio returned for another heavyweight assault on the UK charts with their Bangles cover, Eternal Flame. Mixing the classic 80’s song with the Kittens distinctive identity AK banked another number one. August saw the UK re-release of their debut album Right Now. Featuring brand new songs and classic Kitten hits, Right Now rocketed to No.1 – staying at the top of the charts for two weeks, keeping David Gray and Prince from that elusive spot.

The Kittens’ massive success in 2001 took them to a whole new level. From topping the charts all over the world to pinning their AK slogan across Prince Charles’ chest (as guests of HRH at The 2001 Party In The Park), the Kittens also picked up a number of awards along the way. These include the 2001 Disney Awards for Best Pop Act and World’s Sexiest Females, a Best Pop Act nomination at the MTV Europe Awards, a Smash Hits Poll Winners Award for Best Single (Whole Again) and the Music Week award for Best Pop Act Online with AtomicKitten.com. In 2002 their hard work continued to shine with BRIT Award nominations in two categories: ‘Best Pop Single’ for ‘Whole Again’ and ‘Best British Newcomer’. 2nd Album “Feels So Good” was another number one album and spawned another run of huge hits including It’s OK, Love Doesn’t Have to Hurt and the monster hit The Tide is High as well as the double A side single Be With You”/“The Last Goodbye.

Their 3rd album Ladies Night was also packed with hits including the Kool and the Gang collaboration as well as the hits If You Come to Me and Someone Like Me.

Taking an extended break after the album the girls finished on a high with a sold out arena tour and a greatest hits album and DVD.

In 5 years Atomic Kitten kicked their way into the national pop psyche and became the biggest girl group in Europe. They generated more press than any other UK act with their every move photographed and celebrated. They also did more charitable work across the board than any other group becoming patrons of Worldvision, Unicef, Save the Children, Breast Cancer research and a myriad of smaller more personal charities.

The band still gig regularly around the world, in 2006 The Kittens performed at the Nokia New Years Eve Global party, across 5 continents and alongside The Black Eyed Peas, Scissor Sisters and Nelly Furtado, the girls headlined the show in Hong Kong which was broadcast to an audience of over 150 million. They also delivered a hit charity single for the 2006 world cup in Germany and launched Liverpool’s Echo arena with a sold out show in 2007.

Since Atomic Kitten bowed out with their sold out arena tour in March 04 the girls’ solo careers have built brilliantly with singles, TV shows, non stop charity work and hundreds of gigs around the globe.

Liz’ first single – the Robin Gibb collaboration on Woman in Love was top 5 in the UK while Natasha’s debut Round and Round went to #1 in Brazil and top 10 on Billboard’s US dance chart. Jenny forged a TV career presenting BBC3’s smash hit Snog Marry Avoid now into it’s 4th hit season.

Proving they are still very much alive and purring Atomic Kitten continue to go from strength to strength both with their solo careers and as Kittens and are looking forward to a busy 2011!