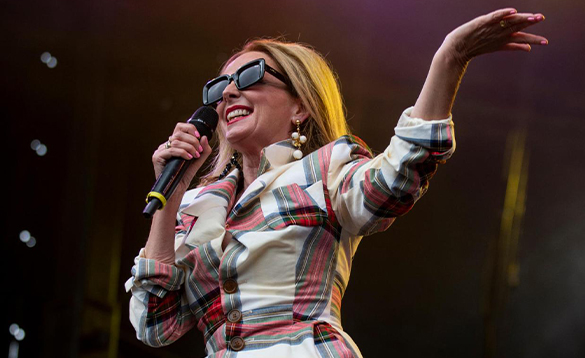 CLARE has worked extensively in Music, Film, Television, Theatre and Radio for 30+ years. The summer she left school her band ALTERED IMAGES were signed to CBS Records and CLARE appeared in the BAFTA winning comedy GREGORY’S GIRL directed by BILL FORSYTH.

ALTERED IMAGES quickly had worldwide success, selling millions of records, which topped the charts in several countries. They recorded 3 Top 10 Albums and had 6 UK TOP 40 hits – working with legendary producers MARTIN RUSHENT, MIKE CHAPMAN and TONY VISCONTI. They were voted BEST NEW GROUP at the NME awards the same year they were invited to play at THE ROYAL COMMAND PERFORMANCE.

CLARE and the band worked closely with Scottish painter DAVID BAND creating original pieces of artwork that were released as special edition prints along with the singles. CLARE recently received a Special Recognition Award at the SCOTTISH MUSIC AWARDS. She made her debut at the ROYAL ALBERT HALL where she joined TEXAS onstage and recently played to a sell-out crowd at LA MICROSOFT ARENA. In the summer of 2018 CLARE appeared at Edinburgh Castle – another first for CLARE. ALTERED IMAGES songs have always had an established audience and in recent years a brand new one as well. CLARE couldn’t be happier about the opportunity to breathe new life into songs she wrote and loves playing in front of such enthusiastic crowds. She is in the early stages of writing some new material.

She has had roles in dozens of TV and Radio Dramas, including some of the UK’s best-loved TV shows. SKINS – which she also wrote songs for!
WATERLOO ROAD, EASTENDERS, DOCTORS, RED DWARF, FATHER TED, TAGGART, SEA OF SOULS, FORGIVEN and most recently had the chance to appear in one of her all-time favourite comedies STILL GAME. Her film credits include, GREGORY’S GIRL, COMFORT AND JOY, JILTING JO, WEDDING BELLES, SMALLEST GAME IN TOWN, LOYAL, EMO, THE PENALTY KING, BAFTA winning drama THE WEE MAN, DELIRIUM and most recently PERFECT STRANGERS – a Xmas Movie due for release Xmas 2020.

CLARE has presented film, travel and music shows for TV and radio including the BBC’s THE ONE SHOW, STV’s SCOTAND’S REAL HEREOS, ITV’s DREAM TICKET, VH 1 and VINTAGE TV. Her new show for BBC SCOTLAND, CORNER SHOP COOK OFF will launch this FEB. She has presented for 6MUSIC, BBC RADIO SCOTLAND and ABSOLUTE 80’S. Radio 4 comedy and dramas include ROMANCE AND ADVENTURE alongside Josie Long, RUMBUNCH with Med Giedroyc and the serialisation of MODESTY BLAISE.

Her debut novel – TALLULAH AND THE TEENSTARS reached No 2 in the Waterstone’s Children’s Book Chart – Book 2 – TALLULAH ON TOUR is available for download on Amazon.
This Spring she will be in Scotland performing in her first play in 7 years BAREFOOT IN THE PARK at THE PITLOCHRY FESTIVAL THEATRE and THE ROYAL LYCEUM EDINBURGH.
CLARE loves that she is still getting to do all the things she loves doing.