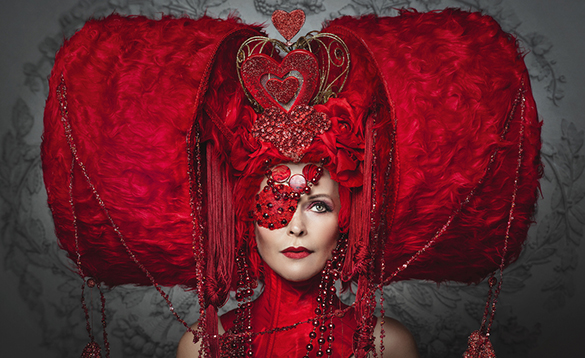 Toyah has made a highly successful, prolific and incredibly diverse career with major hit records and many prestigious stage and screen roles to her credit, which has made her one of Britain’s biggest household names.

Toyah continued to gain ever-strong roles, appearing alongside Katherine Hepburn in the film “The Corn Is Green” as well as playing “Monkey” in the legendary “Quadrophenia”. By 1979 Toyah’s band was gaining critical success with the debut single Victims Of The Riddle (number one in the independent charts) and six track EP Sheep Farming in Barnet. Meanwhile Derek Jarman asked her to play Miranda in his innovative version of The Tempest, which won her a nomination as Best Newcomer at the Evening Standard Awards. She also appeared at the ICA in Steven Poliakoff’s American Days and in the BBC series Dr Jekyll and Mr Hyde with David Hemmings.

The following year Toyah’s album The Blue Meaning became a Top 40 hit. Acting roles continued too, including a leading part in Sugar & Spice at the Royal Court Theatre. An ATV documentary “Toyah” and an accompanying live album Toyah! Toyah! Toyah! confirmed her status as one of the most significant new talents of the eighties.

A European tour, further television roles and chart successes included It’s A Mystery, I Want To Be Free and the platinum album Anthem followed and 1981 ended with a Christmas Eve concert from the Theatre Royal, Drury Lane, which was screened live as The Old Grey Whistle Test Christmas Special. 1982 saw her winning Best Female Singer in the then Rock & Pop Awards (now the Brits). The year also brought more extensive touring in support of the follow up album The Changeling and the hit singles Brave New World and Be Proud, Be Loud, Be Heard.

The albums Minx and Desire continued Toyah’s music career as she also made the charity project album The Lady Or The Tiger with Robert Fripp. Notably her least commercial album Prostitute was released in 1988 as Toyah moved away from the glare of the pop spotlight and sough out her and refreshed her lyrical colour once more. This experimental album is seen as a benchmark for the newest generation of honest and expressive singer songwriters.

With her husband Robert Fripp she formed the band Sunday All Over The World, who became known for their strong live performances and toured worldwide before recording the debut album Kneeling at the Shrine which received rave reviews. In 1988 she played Hermia in Midsummer Night’s Dream at Birmingham Rep and the following year joined The National Theatre again to appear in their production of the Eco tale Whale. As a new decade began Toyah starred in the Channel 4 film Midnight Breaks and in the successful Cambridge Theatre Company’s touring production of The Taming of the Shrew. It was during this production that Toyah was asked to play the lead in Emilie Zola’s Therese Racquin – a role Toyah considers her best and most challenging and brought some of the best reviews of her career. She appeared as the Ship’s Cat in the TV version of Beatrix Potter’s Little Pig Robinson and also appeared at the “Women In Music” festival at London’s Shaw Theatre with an aptly named girl band “The She Devils”. During 1991 Toyah and Robert Fripp travelled to America to promote both albums released that year, Sunday All Over The World and Toyah’s self produced Ophelia’s Shadow, the album Toyah feels is her strongest to date.

The last two years have been the busiest of Toyah’s life. She has performed 446 shows to over half a million people. Twenty three of these shows were part of the Here and Now Tour where she realised her ambition of playing Wembley to sixteen thousand enthusiasts.

But the majority were for her starring role in Calamity Jane, which was nominated for the Manchester Evening News Best Musical in November 2002 and went on to a huge success in London’s West End. She is due to revive the role in 2005.

Alongside all of this she took timeout to survive 12 long days and nights in the Australian jungle for “I’m A Celebrity … Get Me Out Of Here” in May 2003. She has also just presented the last programme to come from Birmingham’s legendary TV studio Pebble Mill.
In the past Toyah has had 15 top 40 singles, 4 gold and platinum albums, made over 10 feature films and appeared in over 30 stage plays.

She has written two best sellers Living Out Loud, her 2000 autobiography and Diary Of A Face Lift documenting plastic surgery in the world of show business.