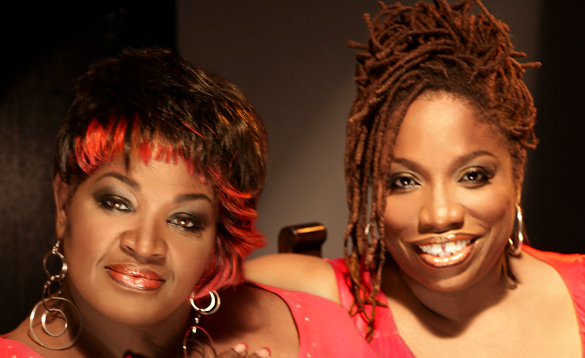 Timeless within the trend: The WEATHER GIRLS, are a constant hit, considering dance, pop and soul rhythms. For more than 20 years and with varying line-ups over the years, the spirited ladies perform on stage and entertain their fans with their powerful voices, good spirit and good vibes.

Who doesn’t know “It’s Raining Men” or “Can U Feel It”, the songs, that have reached top chart positions worldwide in the past two centuries and which became probabely the most popular party hymns ever. For many years good parties cannot be imagined without these songs. The WEATHER GIRLS inspire people who are young or young at heart as well as “trendy” and “normal” people. These ladies are simply a “cult”!

Quickly some short facts about the history of the WEATHER GIRLS: Founded as “Two Tons Of Fun”, what they called themselves in the 70ies, the duo consisted of Izora Armstead and Martha Wash. When recording “It’s Raining Men” and renaming the duo in “Weather Girls”, a worldwide career began in the early 80ies.

As Martha Wash decided to start a solo career in the late 80ies and the WEATHER GIRLS were only known as a duo, Izora Armstead came up with the idea to found a family business: “My mom called and asked me, if I would like to sing together with her”, Dynelle Rhodes remembers. “At first I thought, she wanted to put me on, but she said breezily: ‘I’m in the studio working on a new record and you have to decide immediately.’ I quit my job and moved to New York together with my son Anthony.”

The debut family album “Double Tons Of Fun” became a big success, as well as the hit single “Can U Feel It” and the WEATHER GIRLS, now mother and daughter, continued their successful story.

At the time Izora has decided to say “Good Bye” to the stressful tour life and wanted to retire bit and bit, autumn 2004 Izora passed away. This time Dynelle did a call and it was her very good friend Dorrey Lyles who was at the other end of the line. It was easy to convince Dorrey.