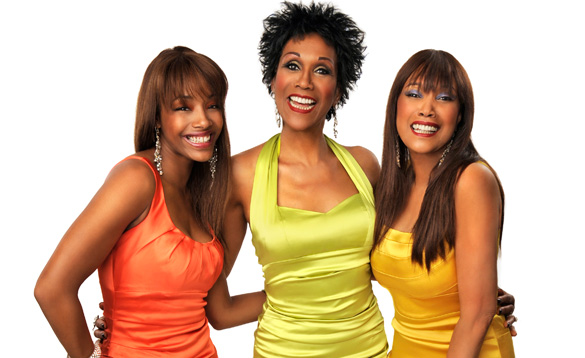 The legendary Pointer Sisters are celebrating their 25th Anniversary this year. They have never been easy to categorise with roots in Country, R&B, Gospel, Jazz, Soul and Pop. In 1995 they starred in a dazzling all new production of the multi-award winning hit Broadway musical Ain’t Misbehavin’ to critical acclaim. This was just another of the many firsts these extraordinary vocalists have experienced in their phenomenal twenty-five year career.

Not content to rest on their past successes, the Pointer Sisters keep reaching for the stars. They have just completed recordingChristmas Town a single to be included on the soundtrack of the animated feature Rudolph the Red Nosed Reindeer which was released for the holidays. In 1994, they burned up the country charts with Chain of Fools, their smash duet with Clint Black, which went platinum and was nominated for Best Song of the Year by the Country Music Association.

In September of 1994, the Pointer Sisters received two great honors. They were awarded a star on the Hollywood Walk of Fame as a tribute to their continued success and they were invited to perform a special concert at the White House for the President and Mrs Clinton.

Recently the Pointer Sisters had the honour of performing in the Macys Thanksgiving Day Parade, which was wet but fun! In 1996 they had a ball with some of their fellow legends like Stevie Wonder, Gloria Estefan and many others performing for the closing ceremonies of the 1996 Summer Olympics in Atlanta. They also performed in three television specials: Up All Night for NBC, A Gospel Christmas with the Pointers and the Atlanta Symphony Orchestra (A&E) and Pop Goes the Fourth was nominated for a Cable ACE Award in the category of Best Performing Arts Special or Series.

Continuously in demand as international musical superstars, the Pointer Sisters headlined a hectic work schedule of world wide concert dates, which recently took them to Germany, Austria, France, Thailand and Australia. The Pointer Sisters have also performed in concert with some of the world’s most prestigious symphony orchestras including the Atlanta Symphony, The San Francisco Symphony, The Louisville Symphony, The Knoxville Symphony and the Boston Pops which was also aired as a musical special on A&E.

One look at their Grammy Awards confirms that the Pointer Sisters have always been mavericks. Nominated ten times, they’ve taken home three in widely varied categories: Best Country Vocal Group (for Fairytale), Best Pop Performance by a Group or Duo (for Jump) and Best Vocal Arrangement (for Automatic).

Growing up and singing together in Oakland, California, the Pointer Sisters, Ruth, Anita and Bonnie honed their set-the-house-afire technique at the West Oakland Church of God where their father was the minister. But unlike most rhythm & blues performers whose expertise is limited to gospel style testifying the Pointer Sisters proved themselves of a wider range of musical mastery that included jazzy scat singing and country crooning.

It wasn’t long before their versatility was noticed and music luminaries like Dave Mason, Alvin Bishop, Boz Scaggs and Grace Slick were soliciting their vocal services. Soon the Pointer Sisters began making their own mark on popular music with a long string of hits starting with their funky interpretation of Allen Toussaint’s Yes We Can Can. Fairytale a tune penned by Anita and Bonnie, was a crossover country hit and the group became the first black female group to perform at The Grand Ole Opry. Continuing their groundbreaking tradition, the Pointer Sisters were also one of the first black female groups to headline in Las Vegas. Their smash hit,How Long (Betcha Got A Chick on The Side) established thePointer Sisters as a musical force to be reckoned with.

The Pointer Sisters continued to make history with such chart toppers as Bruce Springsteen’s Fire, as well as He’s So Shy, Slow Hand, I’m So Excited, Jump (For My Love) and Automatic all of which were staples on MTV and radio stations worldwide. Neutron Dance, the group’s 1984 hit, was culled from the soundtrack of Eddie Murphy’s box office smash Beverly Hills Cop. The Pointer Sisters’ relationship with Eddie Murphy continued with their musical involvement in The Nutty Professor. The Pointer Sisters may also be heard on the feature film Two If By Sea, starring Sandra Bullock and The Associate starring Whoopi Goldberg.

After twenty-five years of burning up the stages and record charts around the world, and the Pointer Sisters are just getting started!