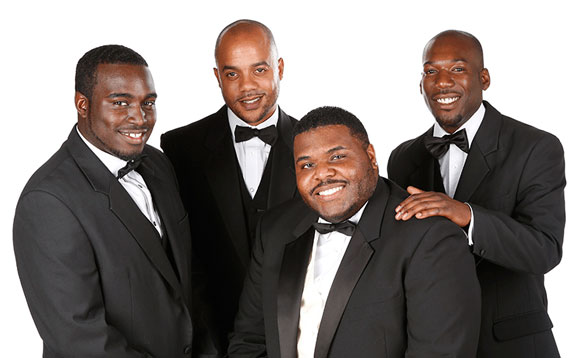 The Drifters were founded in June 1953 by George Treadwell and Ahmet Ertegun – founder of Atlantic Records. In the 60 years since their creation the band has featured over 65 vocalists, including icons such as Clyde McPhatter, Ben E King and Johnny Moore. Some of the legends returned to perform alongside the current line-up at a unique concert at the O2 arena in 2009.

With the exception of the much loved icon Johnny Moore, the current line up is the only complete line up in the group’s history to have recorded on both of the group’s historic labels – Atlantic Records with the release in 2009 of Five Decades & Moore and in 2011 with Sony Music.

The Drifters have sold over 214 million singles and 114 million albums worldwide. They were inducted into the Rock & Roll Hall of Fame in 1988 in recognition of their global success spanning almost six decades.

Since day one, line up members have come and gone, often with new, younger members in order to ensure both the longevity and also the fresh appeal of the group. Johnny Moore, the longest serving member of The Drifters to date, was just 21 years old when he joined The Drifters line up.

Faye Treadwell brought The Drifters to the UK in the early 70s. In fact, when The Drifters performed at the White House in 1993 for President Bill Clinton, the line-up at that time consisted of three British members and one American – Johnny Moore. In 2009 The Drifters shared the bill on a UK Tour with Gloria Gaynor.

In 2009 the current line-up realigned the brand with their former recording label Atlantic Records with the album ‘Five Decades and Moore’ a tribute to the late great Johnny Moore who was one of the most popular Drifters with the UK fans.

In 2010, The Drifters shared the bill on an arena tour in cities across the UK with The Four Tops, The Temptations and The Three Degrees.

The Drifters performed to over 100,000 people in the UK alone last year.

In 2011 the current line up realigned the brand with its other former label Sony Music. Gold Disks for the Up On The Roof album were presented to the current line up and former members of The Drifters at a ceremony at the Liverpool Empire in January 2012. This Album included the first new recordings by the current line-up on the Sony label after 35 years.

“I am delighted that after nearly 60 years, The Drifters name is still very much alive and kicking. The incredible music sung by the band since it was formed by George Treadwell in 1953 has passed down through many generations. From the early days of Clyde McPhatter and Ahmet Ertegun to the current outstanding line up of Michael, Ryan, Daniel and Damion, the music of The Drifters has delighted live audiences and record buyers for over six decades. Only last year, Sony’s greatest hits compilation ‘Up On The Roof’, featuring all the hits and two brand new songs, proved the enduring popularity of this amazing band by achieving gold status and staying on the chart for an incredible 14 weeks. Drifters past and present – I salute you.” Phil Savill, Sony Music 2012

2014 saw the success of the Optimum World Tour the 60/61st anniversary of the group.

2015 also marks the first visit to Australia in over 30 years alongside a new album release in that territory.