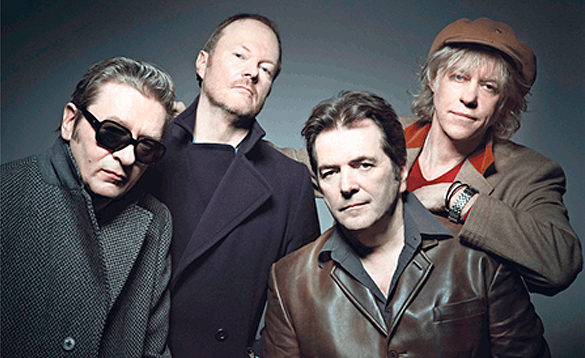 Bob Geldof was originally invited to be the band’s manager, but he soon found himself nominated to take on the role of lead vocals by guitarist Garry Roberts, who originally had that job and didn’t want it. Playing the guitar was difficult enough for him, without having to sing as well. Geldof’s ridiculous harmonica playing impressed the others hugely and sealed his fate.

The band’s early influences were Dr. Feelgood, The Rolling Stones, The Who, The Doors and Bob Marley, among many others. Gerry and Pete arranged the band’s first gig for Hallowe’en 1975, for a fee of £60 – not bad for 1975, under the name of The Nightlife Thugs, at the Bolton Street Technical College, where they – and Johnnie, were studying Architectural Technology. Just before the band went on stage, they changed their name to The Boomtown Rats, who were a gang mentioned in Woody Guthrie’s autobiography, “Bound For Glory”.

The Rats were soon causing a buzz throughout the whole of Ireland.

The Boomtown Rats relocated to England in search of a record deal. They turned down a million pound deal from Richard Branson’s Virgin Records, and decided instead to sign for a new label that had been set up by former Phonogram man Nigel Grange and DJ Chris Hill. The new label was called Ensign.

The Boomtown Rats played their first ever UK gig on May 6th at the Lodestar Club, Ribchester, Blackburn, Lancashire. The supporting acts were Demolition, and Disco-Punk Chris Graham.

Having undertaken a hectic schedule of touring including gigs with Tom Petty, and The Ramones, The Boomtown Rats debut singleLooking After Number One entered the UK charts in it’s first week of release at No. 78. The NME made it their single of the week. The Rats did their first TV show, a turn on The Marc Bolan Show. Marc tragically died 2 weeks later in a motor accident.

Looking After Number One peaked at No.11 in the UK charts and The Rats were invited to do their first TOTP appearance. The band had now arrived. The Rats released their debut album, the imaginatively entitled Boomtown Rats. The album reached 18 in the UK charts.

The Rats released their second single Mary Of The Fourth Form from their debut album, this was a ditty about a schoolgirl, Mary Preece who Geldof had fancied. The single reached No.14 in the UK singles chart.

She’s So Modern reached No.12 in the UK charts, more gigs, more tours, more exposure. Geldof was now becoming as well known for his motor-mouth as he is for his music, picking up the nickname “Bob The Gob” by the music press for his outspoken views, with quotes like “All I want out of pop music is to get rich, get famous and get laid”.

The fourth single Like Clockwork became the bands first top 10 single reaching No.6.

The Rats second album A Tonic For The Troops produced by Robert Mutt Lange reaches No.8 in the album charts and hangs around for 44 weeks.

There was more TV, a promotional trip to America and November saw The Rats reach the top, when Rat Trap knocked John Travolta & Olivia Newton John off the No.1 spot.

The Boomtown Rats were so pleased with their achievement that they tore up pictures of John Travolta & Olivia Newton as The Rats began to sing on Top of The Pops!

The Boomtown Rats made history as the first Irish band to have a UK No.1 hit. Rat Trap is also recognised as the first New Wave song that made No.1 in the charts.

In January of this year, Geldof hears the story on the news of the Californian schoolgirl, Brenda Spencer who shot and killed her principal of the school and injured many of her school mates. When interviewed and asked why she did it, she replied “I Don’t Like Mondays”. This quote proved to be inspirational to Bob Geldof & Johnnie Fingers. The ensuing single became a smash hit world-wide, reaching the No.1 spot in 32 countries and quite rightly became an all-time classic.

The Boomtown Rats undertook a world tour, taking in America, Europe, Japan, Australia and New Zealand. The American leg of the tour ended at The Palladium in New York.

The Boomtown Rats third album The Fine Art Of Surfacing reached No.7 in the UK album charts. In December, the band releasedDiamond Smiles which peaked at No.13 in the UK charts.

Also in ’79 Simon Crowe & Pete Briquette co-wrote You Caught Me Out with Kirsty MacColl.

The band released Someone’s Looking At You, another hit single which reached No.4 in the UK charts. Again they had a heavy live touring schedule all over the world.

March saw Brenda Spencer’s parents trying to have I Don’t Like Mondays banned in the US. Many American radio stations refused to play the track. The single only made it to No.73 in the US chart. America’s negative feeling on Mondays is not reflected in the rest of the world. In May 1980 I Don’t Like Mondays wins the best pop song and outstanding lyric category at the 25th Annual Ivor Novello Awards, held at the Grosvenor House Hotel in London.

The Rats released their reggae influenced single Banana Republic which reached No.3 in the UK and German charts. The single spent 16 weeks in the West German Top 20 charts as Germans releated the song to the plight of East Germany.

The Rats recorded their new album Mondo Bongo in Ibiza with producer Tony Visconti who had previously produced albums with T Rex, Bowie, Thin Lizzy, The Stranglers, Iggy Pop, to name but a few.

The album Mondo Bongo reached No.6 in the album charts. The single Elephants Graveyard reached No. 26 in the singles chart.

Guitarist Gerry Cott decided to leave the band. The Rats tour Asia and visit places of interest to the band, India, Malaya, Hong Kong and Singapore. But whilst away from the shores of “Old Blighty” the tides had begun to shift.

The New Romantic movement was growing strong and bands like Duran Duran had taken prominence. The Rats new single Never In A Million Years, another great song, failed to reach the top 30.

The Rats new album V Deep, again produced by Visconti, fails to make an impact. The title comes from a Japanese description of one style of love-making, four shallow, five deep. Bob thought this was cute, it was the bands fifth album and now that Gerry Cott had left the band, there were five members, so it all seemed appropriate. Some of the songs were actually rejects from the Mondo Bongo album.

The single House On Fire did well in the UK charts. The Rats tour the UK to promote the album, on a tight budget.

Saw little activity, no new albums, no new singles. The Rats played a university circuit. Things were looking bad for the bank balance, but the university gigs, from a punters view, were wild. Hot sweaty gigs, students enjoying their freshers ball.

The Rats new single Tonight only reached No.73. The brilliant single Drag Me Down limped to a lowly No.50. The Geldof masterpieceDave sinks without trace, although Pete Townsend of The Who said Dave was “the best single of 1984”. A Hold Of Me fails to make an impression.

The Boomtown Rats tour the UK in a determined effort to crawl their way back. 44 gigs in 48 days. The band had to cut corners, making their own stage sets, but again the tours were wild. One gig in particular, in early 1984, at York University caused a major problem, when the university threatened to sue Bob for encouraging the audience to get up and dance in what was an all seated auditorium.

Geldof saw a news report on the TV about the famine in Ethiopia.

Early in this year, The Rats toured the UK to promote the release of The Rats best album in years, In The Long Grass. Brilliantly crafted songs, like Drag Me Down, A Hold Of Me and Dave. The whole tour was a sell-out, and fans were treated to The Rats version of Do They Know It’s Christmas.

The Boomtown Rats sing on the Band Aid record Do They Know It’s Christmas. In its first week of release the single became the UK’s fastest seller of all time, entering the chart at number one and going on to sell over three million copies, making it the biggest-selling single in UK history up to that point

On July 13th 1985 The Boomtown Rats played the Live Aid Concert in front of billions of people.

Bob Geldof decides to go solo, and so The Boomtown Rats play their last gig in Ireland for Self-Aid.

Loudmouth – Best of album is a top 10 hit in the UK album charts.

The Boomtown Rats back-catalogue is released with all 6 albums in the top of the Amazon charts, plus a Best Of album reaching the official UK Top 20.

Guitarist Garry Roberts and drummer Simon Crowe get together to form The Rats – playing Boomtown Rats songs from the first three albums.