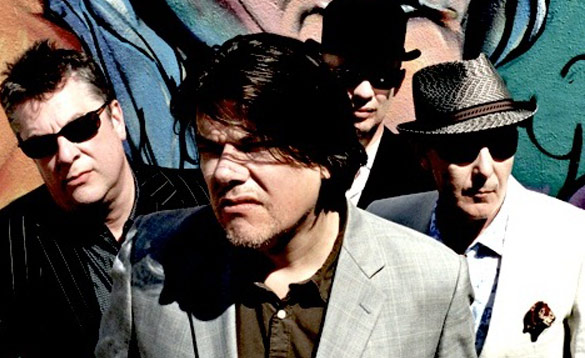 The Blow Monkeys were formed in July 1981 when Robert Howard (Dr Robert) returned from living in Australia and met up with Neville Henry and Mick Anker. The band made their recorded debut on the tiny independent imprint, Parasol, in January 1982 and supported its release with extensive gigging in London, eventually securing a residency at the dearly departed Moonlight Club in Hampstead. The band’s idiosyncratic pop songs secured a record deal with RCA,, inked in July 1983. It was at this stage that Tony Kiley joined the band replacing original drummer Angus Hines. The Blow Monkeys debut LP Limping For A Generation was released the following year, produced by Jam/Style Council sound manicurist Pete Wilson.

Animal Magic was the band’s second album, released in May 1986, and achieved the much sought after breakthrough. It contained the massive worldwide hit Digging Your Scene, which burst into the top ten singles listings both Europe and the USA. Amongst the album’s many gems was a duet with bizarre Jamaican toaster Eek-A-Mouse, entitled Sweet Murder. Such duets were a portent of things to come.

By January 1987, the band considerably consolidated their status with the irresistible single, It Doesn’t Have to Be This Way, which peaked at the number five position in the UK top ten. March of that year saw the release of the band’s third album, She Was Only A Grocer’s Daughter, and achieved silver sales status on release. Produced by American Michael Baker, it featured Celebrate (The Day After You), a glorious duet with Chicago soul/funk legend Curtis Mayfield. If the album title was a thinly veiled reference to the then British leaderene, Margaret Hilda Thatcher, the duet made explicit what much of the UK would have felt had she been ousted from power in the 1987 election. However, the BBC banned the single from broadcast because of a perceived anti-Conservative lyrical theme. Undeterred, the band further underscored their political affiliations by joining the Red Wedge tour later that year.

The band’s next album, Whoops! There Goes The Neighbourhood, was a thematically linked collection written in response to the aforementioned prime minister’s notorious pronouncement“… there’s no such as society”. Contained within its grooves was another collaboration, this time with soul diva Kym Mazelle, entitled Wait. This earmarked the band’s status as pop innovators, not only by embracing political themes but also by seeing the potential in the dance/pop experimentation crossover at a time when the whole dance scene had yet to go “overground”. This experimentation would achieve its full fruition on the band’s last album, Springtime For The World. In the meantime, RCA released the band’s “greatest hits” collection, Choices, in 1989 – the album going “gold” on release.

Springtime was an eclectic and unusual album which, despite confusing both record company and music critics, has retrospectively become revered as an innovative record – perhaps some way ahead of its time. It contained the Balearic classic La Passionara, and Be Not Afraid, a duet with Algeria’s primo Rai exponent Cheb Khaled. The track gave the band a profile in such rarely-charted pop places as Pakistan and North Africa. After nearly ten years together the band decided it was time for a rest and so they did… for 18 years!

In Jan 2008 the band entered the studio with all four original members and started work on a brand new album entitled “Devils Tavern”. A collection of 11 original songs written by the bands leader Dr Robert. “It just felt like the timing was right… we have all been busy in the intervening time… I have release 8 solo albums, working with people like Paul Weller, PP Arnold and doing production for Beth Orton, Nev has continued to work within the music business doing production and writing and Mick and Tony have never stopped playing… which is why they are so good!” says Robert “But we missed playing together, being in a band.making our unique sound… this album is the one we always wanted to make.”

“Devils Tavern” was recorded in Andalucia in Southern Spain where Robert resides these days. It was produced by the band themselves with additional production coming from honorary “Monkeys” Marius De Vries (Bjork, Rufus Wainwright, Massive Attack) and Adam Moseley (Beck, Dust Bro’s). Due for release in Aug 2008 on their own label, the album is a high water mark for a band who are continuing to evolve. With tours being booked and suits being measured it was time for some more Simian Soul andPrimate Punk…

“Staring At The Sea”

In Feb 2011 The Blow Monkeys released their first album for new label FOD Records called “Staring At The Sea”..With songs such as “Steppin Down” and the mesmeric title track “Staring At The Sea” the album showed a band at the peak of their form… still striving forward making possibly the best music of their career at a time when most musicians are putting their feet up and basking in former glories…