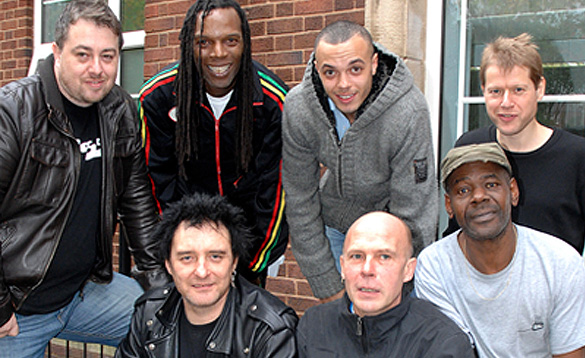 One tempestuous weekend in March 1979 was not only the date of the Three Mile Island nuclear incident, but it was also the very first show by a nascent band known as The Beat in Birmingham, England. Introduced as “the hottest thing since the Pennsylvania meltdown”, the band had a sense that the next few years could well be explosive! The Beat hailed from working class, industrial Birmingham, England. When The Beat rushed on to the music scene in 1979, it was a time of social, political and musical upheaval. Into this storm came The Beat, trying to calm the waters with their simple message of love and unity set to a great dance beat.

The Beat were all about inclusion, rather than exclusion, and this showed in their personnel and their music influences. The six member band consisted of Dave Wakeling on vocals and guitar, Andy Cox on guitar, David Steele on bass, Everett Morton on drums, Ranking Roger on vocals and toasting, and foundational first wave ska legend Saxa on saxophone. Shortly after the release of their first album, Dave Wright aka Blockhead joined the band on keyboard. The band crossed over fluidly between soul, reggae, pop and punk, and from these disparate pieces they created an infectious dance rhythm. Along with their contemporaries The Specials, The Selecter, and Madness, The Beat became an overnight sensation and one of the most popular and influential bands of the British ska movement.

By Christmas of 1979, The Beat were riding high in the UK charts with their first single, a smoking remake of the classic Smokey Robinson tune Tears of a Clown.

Over the course of the next five years The Beat toured relentlessly and released three studio albums: “I Just Can’t Stop It”, “Wh’appen”, and “Special Beat Service”. The band toured the world, touring with such artists as David Bowie, The Police, REM, The Clash, The Talking Heads, The Pretenders, and The Specials, to name but a few.

The Beat kept scoring hits with tunes that have now become so popular that it’s hard to remember a time when they didn’t exist, such as Mirror in the Bathroom, Save it for Later, I Confess, Stand Down Margaret, and their serene cover of Andy William’s Can’t Get Used To Losing You.

After the split of 80’s ska band, Everett, Saxa and Ranking Roger worked on many other projects. Ranking Roger along with Dave Wakeling formed General public with former Dexy’s Midnight Runners keyboardist Micky Billingham. General Public split in 1986 and 1988 saw the release of the solo album Radical Departure by Ranking Roger. He then went on to form Special Beat with Neville Staple from The Specials.

In 1988 Everett and Saxa became part of the International Beat along with Neil Deathridge, with regular guest appearances by Ranking Roger and Micky Billingham. The International Beat enjoyed success both in the UK and in the USA. After the split of the International Beat in 1992, Neil met songwriter Tony O’Donnell and they performed together at many venues throughout the UK.Finally in 2001, Ranking Roger, Everett, Saxa and Neil got together again along with Tony O’Donnell and Andy Pearson who had previously worked with Roger and formed the band Twist and Crawl, On February 10th 2003 The Beat’s reunion gig took place at London’s Royal Festival Hall. Ranking Roger along with Everett, Saxa, Neil and Andy were reunited with Dave Wakeling and Blockhead. The overwhelming success of the gig, encouraged Ranking Roger to resurrect The Beat, with his son Matthew Murphy accompanying Roger on vocals in place of Dave Wakeling. The present line-up was completed when Mark ‘Chico’ Hamilton became the bands permanent sax player. Saxa always insisted that “we boys mus” find someone to take over from him. It is a pleasure for him to know that Mark is the son of Andy Hamilton, a life-long friend of Saxa and an internationally renowned jazz saxophonist. Saxa and Mark did many gigs together before Saxa was eventually obliged to give up life on the road. However, the spirit of Saxa is still on the road and has left an indelible mark on this band.

At long last Roger and the boys have recorded the first album for The Beat since the early 1980’s. Currently being mixed by Adrian Sherwood the album is once again a work of pure brilliance by a band whose musical prowess has lasted 3 decades.