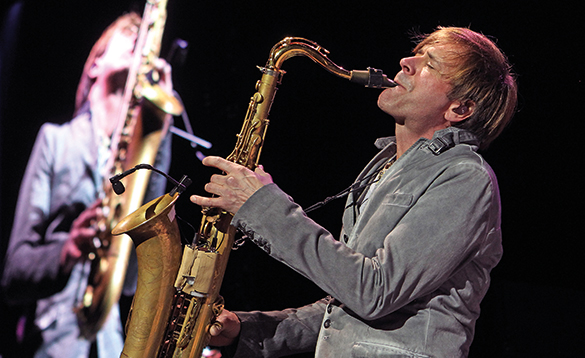 In 2017 Steve formed his own 5-piece band and played 4 sold-out shows in London, Madrid and Birmingham. His set includes new solo material, Steve’s favourite tracks including Al Greens Lets Stay Together and Bowie’s ‘Starman’ and classics from Spandau Ballet such as ‘True’, ‘Gold’, ‘Only When You Love’, ‘Through The Barricades’ to name but a few

The show is quite spontaneous and anarchic but also a lot of fun. Steve involves the audience, talks about Spandau, life, whatever comes to mind, especially the anecdotes along with performing some great music

The 80s. Loved by so many. Not only by the ones that personally witnessed this legendary decade but also by their offspring.

One gentleman who crucially helped to shape this decade is Steve Norman Saxophonist, Guitarist, Percussionist, songwriter and founding member of the world-famous cult band Spandau Ballet. It was 1979… the place was called the BLITZ CLUB in Soho, London. The house band of this legendary club, which set trends in music and fashion and where Boy George, Steve Strange, Sade, George Michael, David Bowie and other personalities of the New Romantic scene partied at, called themselves SPANDAU BALLET. They were the hottest unsigned band on the planet and the record deal was not long in coming.

To this day, SPANDAU BALLET has had 23 hit singles (i.e. “True”, “Gold” and “Through The Barricades”). They sold over 25 million records worldwide and have been awarded numerous multi-platinum awards. The band performed at the Live Aid concert at Wembley Stadium and were involved in Band Aid’s Christmas classic “Do They Know It’s Christmas”