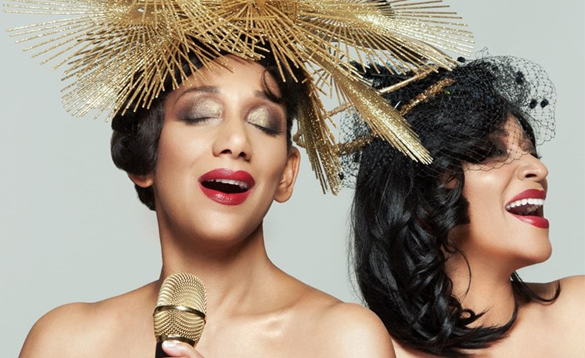 Five sisters growing up in Philadelphia, Pennsylvania. Carol, Debbie, Joni, Kim and Kathy, acquired a keen appreciation for music through the vocal tutelage of their grandmother Viola Beatrix Williams, a lyric soprano and graduate of Bethune Cookman College.

At the tender ages of 7, 5, 4 and 3, Debbie, Joni, Kim and Kathy became known as a singing group called “Mrs Williams’ Granddaughters” performing at local church functions and charity affairs throughout the city of Philadelphia. Their joy for music blossomed through Carol’s love of popular music and their exposure to a rich musical heritage. Like most kids, they echoed the artistes they admired. Unlike most kids, those artistes they esteemed spanned a diverse musical spectrum, from Aretha Franklin to Leonty Price, from The Supremes to Broadway stars like Edwin Sledge, the girls’ father.

The group’s mother, Florez, was a movie actress and dancer from New York. As a single parent, Mrs Sledge raised the girls from elementary school through college, became the group’s personal manager and the key to their success as Atlantic Recording stars, Sister Sledge.

The years to come brought wonderful adventures. They sold millions of records worldwide and travelled extensively in Asia, Africa, throughout Europe and the United States, earning commendations and rave reviews. “Sister Sledge have the stuff legends are made of” stated one critic from The Chicago Tribune.

One particular LP We Are Family earned a multi-platinum status for excess sales of two million in the USA. It also went gold in several other countries. In fact, We Are Family was re-released in 1985 in the UK and went gold all over again.

During the eighties the world witnessed the full flowering of four college graduates with consequent hits Lost On Music, We Are Family, Thinking Of You, He’s The Greatest Dancer and the international No.1 Frankie.

At present, Sister Sledge, consisting of three girls, Debbie, Kim and Tanya (niece of original members) is still going strong with a solid following. With boundless energy and tremendous talent, Sister Sledge is a combination of sophistication, effervescence and soul.

Sister Sledge has captured the hearts of many diverse audiences, from Carnegie Hall to the Sun Plaza in Tokyo… from the Apollo Theatre in Harlem, to hosting their own television show for RAI in Italy.