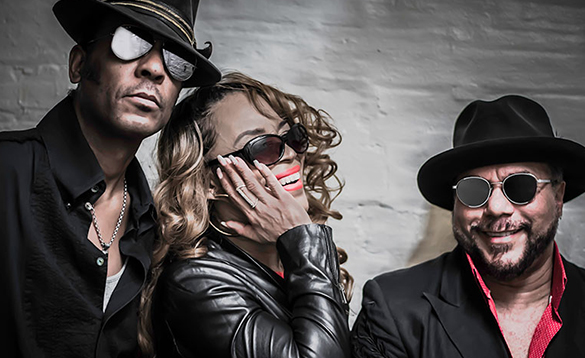 The name Shalamar may be familiar to some as that of a legendary garden in the Far East, created by a prince in tribute to his lady’s beauty. In the 1980’s however the Shalamar became synonymous with one the most consistently successful Black American bands who have notched up sixteen UK chart hits since their debut in 1977 with Uptown Festival. All their subsequent hit records attained classic status with dance fans all over the world-amassing over 300 weeks on
The R&B charts in America in process-the equivalent of six consecutive years on the chart!

Yet it all begin rather more innocently, when two of the dancers on the legendary American TV Soul Train got together in 1977 to dance to that first single. Uptown Festival was a medley of classic Motown tunes in the dominant disco medley style of the time, and was an instant success on both sides of the Atlantic, reaching No.30 in the UK charts in May 1977. The success of this single promoted the record company Solar Records to create a group to match the demand of the single. Through public
Pressure, two of Soul Train’s most popular dancers, Jeffrey Daniel and Jody Watley, were recruited to form the group. They would later be completed by the addition of singer/crooner Howard Hewett (critically acknowledged as possessing one of the best voices in the business) to form the trio which became known as Shalamar.

By the time the trio up with producer Leon Sylvers for their 1979 album Big Fun the hits had started to follow. The Second Time Around was Shalamar’s first major hit, displacing Michael Jackson’s “Rock With You” from the No.1 spot on the American R&B charts and crossing over into the top ten of the Billboards hot 100 in the process. This was closely followed by the hit I Owe You One from the same album, which reached No.13 in the UK charts. The album Big Fun went on to achieve Gold status in America.

In the 1981, Shalamar released the album Three For Love which spawned the cross-over hit song Make That Move which was No.5 in the States and a top 30 hit in the UK. In addition were the hits singles Full Of Fire and the popular ballad This Is For The Lover In You which displayed a whole new dimension to the group’s vocal talents. The album Three for Love was Shalamar’s second Gold status album. Later that year, Shalamar released the album Go For It which many music critics would describe as the “defining sound of Shalamar”. This album featured the two-step favourite Sweeter As The Days Go By.

However, it was with the release of the 1982 album Friends that Shalamar finally gained the full recognition they had always promised in the British pop arena. This was the year that sign-posted their success, when the group seemed to be rarely out of the UK charts. The Friends album generated four top ten hit singles – I Can Make Feel Good hit No.7 in March, followed by the Shalamar anthem A Night To Remember hitting No.5 in June, There It Is hitting No.5 in September, and finally Friends the title track hitting in December. Nor was it merely a matter of chart success… Shalamar cultivated a fashion image that would be followed by many others in the new romantic pop era of the early 80’s. Jeffrey Daniel’s’ distinctive body-popping dance style charmed British TV audiences and set dancefloors, street-corners and playgrounds around the country alight. The band’s live appearances became riotous affairs, tickets being sold as fast as they could be printed- and new records being sold as the Friends World Tour concluded at Wembley Arena. The Friends album, which spawned the four hits, became the best selling album by an international Artiste of that year, notching up over 600,000 sales in the UK alone.

Nor were Shalamar content to sit still-their 1983 album The Look spawned three further top-twenty hits – Dead Giveaway, Disappearing Act and Over And Over, and broke new grounds with it’s merging of soul and rock-elevating the group to supergroup status.

It was not until 1997 that the Shalamar trio Howard, Jeffrey and Jody reunited (along with LL Cool J) for Babyface’s remake of their earlier composition “This Is For The Lover In You” and once again enjoyed a top ten hit on both sides of the Atlantic. With a constant yearning and demand from their loyal fans to recreate the magic of the early years, 1999 saw Howard and Jeffrey embark on a reunion world tour billed as Shalamar featuring Howard Hewett & Jeffery Daniel, to carry on the Shalamar name.