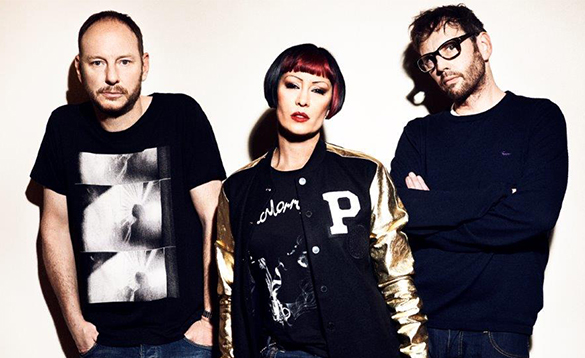 Republica are back and have been very active recently. They released their highly acclaimed new EP ‘Christiana Obey’ and promoted it with a sold out UK tour and selected European festival appearances including the prestigious Isle Of Wight Festival, Norway’s Midnattsrocken Festival, The Welsh GB Rally and Hanover’s Ferryman Festival in Germany.

Republica dominated the charts in the Nineties and exploded back in 2013 with a new EP, UK tour and festival slots. The band’s iconic and fiery front woman, Saffron, Tim Dorney (keyboard) and Johnny Male (guitar) rode the Britpop wave of female-fronted rock bands like Sleeper, Elastica, Garbage and Lush, injecting it with their self-dubbed “techno-pop, punk rock” sound. Between 1996 and 1999, Republica sold an incredible 3 million albums and clinched Top 5 slots in the UK, America and Europe with platinum sales across the globe, while their hit single ‘Ready to Go’ soared to Number One in many countries.

The band has never really been away, with their music becoming the soundtrack to the past few decades – ‘Ready to Go’ featured in the recent Captain Marvel movie and on more than 300 films and adverts. Wes Craven selected their hit single, ‘Drop Dead Gorgeous’ for the soundtrack to his hit movie Scream and invited them to perform at its Hollywood premiere.

With her unique sound and iconic image, it is only natural that Saffron has been in demand from a host of the world’s biggest music acts, including The Prodigy, who used her vocals on ‘Fuel My Fire’ from their critically-acclaimed ‘Fat of the Land’ album. Saffron also worked with The Cure on single ‘Just Say Yes’; collaborated with Junkie XL for his 2003 album ‘Radio JXL: A Broadcast from the Computer Hell Cabin’ and scored a number one dance single with him; she duetted with Gary Numan, recorded ‘Pork-U-Pine’ with Jeff Beck for his album, ‘Jeff’; worked with DJ Carl Cox on ‘Get What You Paid 4’ and also worked with artists including Jah Wobble – who wrote ‘World Of You’ for her – N-Joi – performing on their hit, ‘Anthem’ – Mark Moore, St Etienne and The Shamen.

Republica have been touring constantly over the last couple of years with a sell out tour co-headlining with Space, performances in Dubai, Israel and Germany and a sell out UK tour with Sir Bob Geldolf’s Boomtown Rats.

Saffron has also performed live with orchestras at the the Brit Pop Festival and Back To Basics in Leeds last year.

Republica’s first album is being reissued this year as a Deluxe Triple CDs to be followed by the highly anticipated new album. They are touring through out the summer.