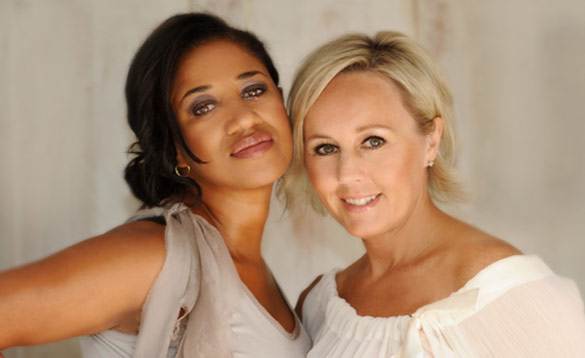 Pepsi & Shirlie became permanent members of one of the biggest pop bands of the 80’s, WHAM with whom they performed on video, television and toured the globe, including America, Japan, and China.

After George Michael disbanded Wham and went onto a solo career, Pepsi & Shirlie took the initiative and formed their own duoPepsi & Shirlie and went on to become one of the most successful girl groups of the late 80’s, achieving top ten chart success with records in England and throughout Europe. The girls even had their own clothes range which could be found on the shelves of ‘Top Shop’ in London and other fashion outlets.

Once Pepsi & Shirlie called it a day, Shirlie decided to spend more time with her family, raising her two children. Pepsi went on to pursue one of her greatest ambitions, to appear in a West End musical. She joined the company of Michael Bogdanov’s ‘HAIR’ playing ‘Sheila’ the coveted lead role and appeared in numerous musical productions around the UK. One of her favourite roles was playing Josephine Baker where she achieved rave reviews.

Pepsi went on to team up with her old band mate George Michael to record the dance floor hit You Spin Me. Pepsi also featured as solo singer on the Mike Oldfield’s European tour and playing to 60,000 crowd and television cameras in Berlin for the Millennium. As part of her collaboration with Mike she also sang on his album The Millennium Bell.

Pepsi & Shirlie got together to sing backing vocals for Geri Halliwell’ on her hit single Bag It Up.

Shirlie is married to Martin kemp (Spadau Ballet). Whilst raising her children, Shirlie pursued her passion for the arts. She enrolled herself into an arts foundation course where she discovered her natural ability for using colour and texture which inspired her to create her own range of home products which she hopes one day to put into production.

Pepsi took a break from the entertainment industry and went to live in New Zealand for 3 years where she worked with various local bands. Pepsi returned to the UK living in the east of England where she set up a business with her husband and during this time trained as a Life Coach. Pepsi now lives between the UK and the Caribbean.

Pepsi & Shirlie will be reuniting for the first time in 16 years to perform on the Here & Now 10th Anniversary tour 2011.