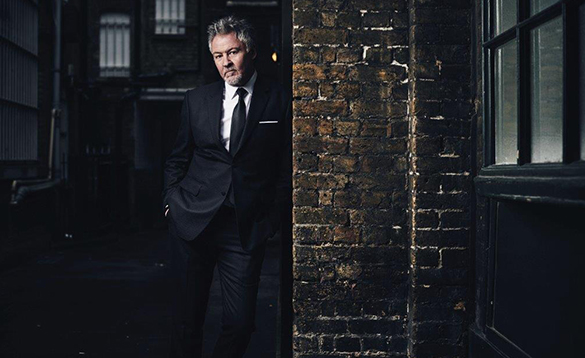 Paul Anthony Young was born January 17th 1956. He was the middle child of three, has an elder brother Mark and a younger sister Joanne. His interest in music dates back to when he was very young, when he learnt to play the piano and then the guitar. On leaving school he worked with his father for Vauxhall Motors and played in various bands at night. He played Bass guitar in his first band but eventually lack of demand for bass players led him back to his first passion, singing. These were lean times musically because his preferred style of music; Soul, was not particularly popular. However he managed to sing in various bands such as Kat Kool & the Kool Kats and later in the better known Street band.

In December of 79’ the Street band broke up and Paul went on to form the Q-Tips. During the next two years Paul introduced himself to more and more of the British public through the Q-Tips extensive touring playing 700 shows all over the UK. This period of intense activity gave Paul the chance to develop his unique voice and stage persona. The Q-Tips went there separate ways at the end of 82’ and Paul signed as a solo artist with CBS/SONY Records.

Paul really came into his own with a formidably accomplished solo debut album, NO PARLEZ released in 83’ and including the number one single Wherever I Lay My Hat which maintained the number 1 spot for most of that summer followed by Come Back And Stay which maintained Paul’s presence at the top of the charts.
With the release of his second album The Secret Of Association and the success of Every Time You Go Away his status as a world star was confirmed.
In 1987 Paul recorded his third album Between Two Fires in Milan where he met the Italian singer Zucchero. They became good friends and were later to collaborate very successfully.

One of the highlights of the 1989 ‘Nelson Mandela Tribute Concert” was Paul’s performance of the Crowded House song Don’t Dream It’s All Over which he later recorded for his best of album. There followed a period of time out to be with his growing family followed by time spent in America where he was to record in Los Angeles and New York the material for his fourth album Other Voices.

In 1991 Paul recorded a duet with his friend Zuchero on the soon to be worldwide popular Sensa Una Donna which along with the fore mentioned Don’t Dream It’s All Over were featured on his best of album From Time To Time.

1992 was spent touring the world, which culminated in Paul’s wonderful appearance at the Freddie Mercury Tribute Concert singing “Radio Gaga” and the release of what turned out to be his final album for Sony The Crossing. Working with the producer Don Was on the material for The Crossing, Paul was exploring new styles of music the gulf between the musical past and future had begun to seem impossible to bridge. The single “Otis Blue” from this album would be the last hit single with Sony. Once freed from his contract Paul took time out to take a breath and to reflect, “Every artist wants to change; every record company wants them to stay the same”.

Too in love with performing to simply sit around and wait until he had new material to perform. Paul Young responded to the hiatus in his career by calling up friends and suggesting they get together in an informal group, simply for fun. The result has been Los Pacaminos, surely one of the most accomplished bar bands the London area has ever seen. For the past six years, the seven-strong line-up has been playing publicly two or three times a month, transforming favoured pubs into Tex-Mex haunts for the night purely by their musical presence. “Its total escapism”, says Paul. “We feature an accordion player, pedal steel, lots of harmonies – which I get to join in on, ‘cos I’m just one of five other guys that can all sing lead. It’s drinking music really, which suits me fine”.

During 1996 Paul prepared new material with long time collaborator, singer-songwriter Drew Barfield, he set about assembling a collection of songs which became the self-titled album Paul Young. This was full of introspective, storyline songs inspired by Paul’s trips to the SouthWest of America.

The Paul Young album was released on the East-West label in May of 97. Although the single I Wish You Love received tremendous support from radio Paul was unhappy with the overall promotion of the album. “I’m older, I’m less inclined to compromise and I have been determined to evolve as an artist”, he says. “Now, I’m no longer content to be just the singer. I need to be in control of the whole package”.

To further this aim and to develop his songwriting Paul Young has been working with various songwriters in Nashville this along with his continuing working relationship with Drew Barfield have produced various cover versions of there songs among them being Then There’s You by The Wilkinsons and Tularosa by Ray Vega.

2001, saw Paul appear on the first Here And Now Tour and has travelled the world with Here And Now as far a field as Australia and Maylasia plus other most European countries. Paul continues to write, record and play live…