Once In A Lifetime

The Once In A Lifetime Tour series started in 2005 with the first of the tours based around Teen Heartthrobs of the 70’s, such a tour in the 70’s would have been near impossible as all four of the Artistes were at the peak of international stardom. The Osmonds, one of the original boy bands were selling out arenas as were the British version, The Bay City Rollers. David Cassidy had reached the dizzy heights of selling out stadiums. David Essex was selling out everywhere he played and was also acting and starring in movies such as Stardust & bringing these four together was such a unique event that Wembley Arena sold out in 2 days and a further day was added.

The next Once In A Lifetime Tour was country themed and featured Kenny Rogers, Don Williams & Rita Coolidge.

As the first tour was so successful a second Heartthrob tour took place in 2007 with the same line up but Les McKeowns Bay City Rollers being replaced with Showaddywaddy, the tour known as Once In A lifetime Rewind Tour.

Following on from this in 2009 a Motown themed tour took place under the banner Once In A Lifetime – Legends Live – It featured The Commodores, Mary Wilson Of The Supremes, Martha Reeves & The Vandellas, The Miracles & Jnr Walkers Allstars.

Once In A Lifetime – The Final tour will take place in June 2014 and will feature The Osmonds, David Essex, Showaddywaddy & Les McKeown’s Legendary Bay City Rollers. To view dates and venues click on the flyer below. 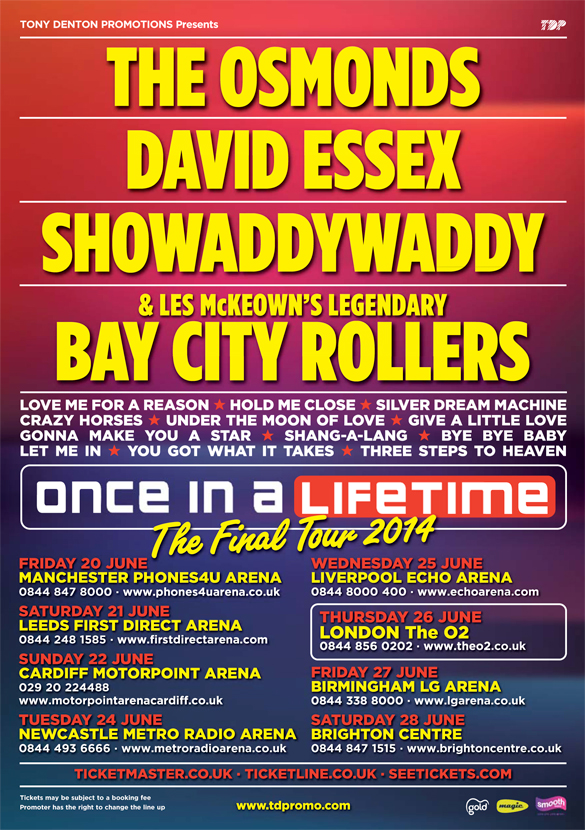