Once In A Lifetime
The Final Tour 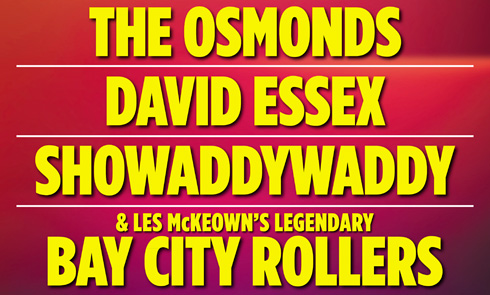 Priority booking for members of Fan clubs and visitors of this website from
9am Wednesday 16th October. Please click on the city link below to purchase tickets,
please note you will need to put in a code for Liverpool & London

LIVERPOOL you will need to quote the code OIAL13

LONDON you will need to quote the code OIAL14

Or via our authorised ticket agents

Four decades ago, four young boys were flashed across national television screens on what was meant to be a one-time shot at ‘the big time.’ That single appearance led to such an overwhelming mail response that for the following seven seasons, Alan, Wayne, Merrill and Jay Osmond became regulars on the Andy Williams Show. From that point on, their name alone became synonymous with the ‘big time’ and everything associated with it. Their lives would never be the same, nor would those lives with whom they come into contact.

They signed with MGM records and within months of their first release skyrocketed to worldwide recognition. In 1971, combined sales from the Osmond Brothers’ and Donny’s releases garnished nine gold records – a total that exceeds the Beatles’ and Elvis’ highest single year collection of gold discs. Since embarking on their prestigious career, the Osmonds have sold over 77 million records and have accrued more than 30 gold records.

The group’s concert career parallels that of their recording success. Standing room only engagements in Las Vegas, attendance breaking performances from coast to coast, and sellout world tours were the normal pattern in the Osmonds’ career. Alan co-produced their smash single, ‘Down by the Lazy River’ as well as several other songs they recorded. As songwriters, Alan, Wayne and Merrill Osmond wrote a good deal of the material the Osmonds recorded.

After the ‘Donny and Marie Show,’ Jimmy experienced a great deal of success in Japan, where he starred in his own television show and earned several gold and platinum records. After returning to the United States, he developed his own production company and produced several commercials and shows for television.

In 2003, the Osmond Family were honored for their achievements in the entertainment industry with a star on the legendary Hollywood Walk of Fame. Today, the Osmond’s are not greeted by as many screams and squeals, but every number they perform is followed by thunderous applause. And instead of a rush for the stage at the close of a show, they get standing ovations. Different age groups have different ways of expressing their approval, but the message is there and the talent is recognized.

The Osmonds took part in the Once in a Lifetime Tour 2005 in the UK, alongside David Essex, David Cassidy and Les Mckeown’s 70’s Bay City Rollers. The tour was a great success, selling out 11 Arenas including two nights at Wembley Arena; The Osmonds playing to an unfaltering rapturous audience.

David Essex enjoys a remarkable career that has combined concerts, records, theatre, composing, films and television with striking success. He has written, recorded and produced albums and singles that have sold millions of copies worldwide – twenty-three Top 30 singles in Britain alone.

David went to an audition for the London production of the musical ‘Godspell’ and was chosen by enthusiastic US producers for the role of Jesus – which shot him to fame. For this show he received two major awards and some ecstatic reviews. Harold Hobson of ‘The Sunday Times’ compared his performance with the Christs of El Greco and Rubens and declared it ‘the best in London’. At the Roundhouse, and for two years in the West End at Wyndham’s, David led a cast among who were Jeremy Irons, Julie Covington and Marti Webb.

Movie producer David Puttnam saw him in ‘Godspell’ and asked him to play the lead in ‘That’ll Be The Day’, co-starring Ringo Starr, and its sequel ‘Stardust’, co-starring Larry Hagman and Adam Faith.  These two films about the rise and fall of pop star Jim Maclaine are still among the most acclaimed about the rock scene and enjoy a wide cult following. They have recently been issued as a double bill on Warner Home Video.

For ‘Godspell’ David won the Variety Club of Great Britain’s ‘most promising newcomer’ award and was nominated by S.O.F.T.A. for the movie ‘That’ll Be The Day’. While filming ‘That’ll Be The Day’ David wrote and recorded ‘Rock On’ which topped the charts in Britain and the USA. David wrote and recorded some very successful singles and albums for CBS Records, including “All The Fun of the Fair”.

‘Rock On’ was followed by such diverse hits as ‘Lamplight’, ‘Hold Me Close’ and ‘Gonna Make You A Star’. The last two went to No.1 in Britain.

Andrew Lloyd Webber and Tim Rice then asked David to play Che in the musical ‘Evita’. Directed by giant Broadway producer Hal Prince (‘West Side Story’), it was the hit of the season. David recorded ‘Oh What A Circus’ on Phonogram – his new record company – and enjoyed a No.3 hit. The theatre was his oyster again.

He starred in and wrote the score for his next movie, ‘Silver Dream Racer’. It co-starred Americans Beau Bridges and Cristina Raines and was a love triangle with a motorcycle racing backdrop. David, in his element on motorbikes, topped the charts with ‘Silver Dream Machine’.

A new departure came when David wrote, with the National Theatre’s Richard Crane, his own musical, ‘Mutiny!’ with Frank Finlay as Captain Bligh to his Fletcher Christian. It was first a concept album and had chart success.  Then it ran at the Piccadilly Theatre, London, for sixteen months.  ‘Tahiti’ – No 7 – was one of three hit singles.

On the pop scene Tim Rice and Mike Batt wrote ‘A Winter’s Tale’ especially for David and this shot up to No.2 in the charts.

Showaddywaddy have long been established as Europe’s most successful ever exponents of retro-inspired rock & roll. The record simply speaks for itself!

23 Top 40 hit singles, including 10 Top 5 hits (Under The Moon of Love, When, You Got What It Takes, 3 Steps To Heaven, Hey Rock & Roll, Etc!) 15 massive selling albums (including the Christmas number 1 in 1978). In excess of 50 Top Of The Pops performances, and countless Industry awards! Bill toppers at the prestigious Golden Orpheus World Music Festival before a staggering TV audience of 300 million people – making history in the process by becoming the first western-world band to be screened live in Communist Cuba!

Late 2004 saw the release of the band’s re-mastered ‘Very Best Of’ collection, which helped the band achieve their first Gold Album award for more than 20 years. The album stayed on the chart for 3 months and it’s phenomenal success exceeded all expectations.

The band again toured extensively with a brand new show in the spring of 2012, with an expanded line-up to perform ‘The Greatest Hits’. The show featured 2 drummers for the first time since the glam days of the 70’s, and has been hailed as ‘an adrenaline fuelled nostalgic treat.’ 2013 marks a special year for the band as they celebrate 40 years of rock & roll with a landmark 40+ date nationwide tour, which is expected to include many surprises along the way.

In 1974 the world was to witness a new musical phenomenon the like of which had not been seen the days of Elvis and The Beatles. The music of the Bay City Rollers became the soundtrack for a generation of teenagers growing up in the mid 70’s. The face and voice of that soundtrack belonged to Les McKeown.

With Les leading the way, the band’s singles and albums shot to the number spot all over the globe. Massive hits such as ‘Bye Bye Baby’, ‘Shang A Lang’, ‘Summer Love Sensation’ and ‘Give A Little Love’ (to name just a few) propelled the band to world-wide superstardom and their trademark Scottish tartan was to be seen everywhere across the planet.