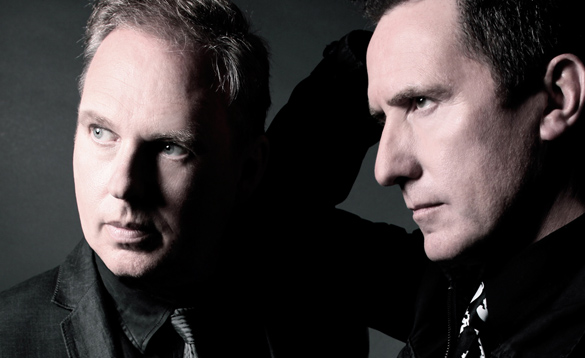 OMD emerged from the dynamic music scene of Liverpool in the late 1970’s. Founder members Andy McCluskey and Paul Humphreys had originally been inspired by German bands such as Kraftwerk and Neu. Working with radio sets and home made synthesisers, Humphreys and McCluskey created their own music.

Naming themselves after one of their own early songs, the two teenagers launched their own unique style of catchy electronic melodies that helped form OMD’s reputation for intelligent pop. Back then, to burden your band with such an unwieldy name as Orchestral Manoeuvres In The Dark might have seemed unwise, but the obvious commercial appeal of their music provoked enough interest that it eventually led to Factory Record’s Tony Wilson offering them the chance to cut their debut single Electricity on the Factory label.

Electricity (and its flip side Almost) perfectly captured OMD’s infectious blend of melody and melancholia. Electricity, with its frenetic dance rhythm, rapidly became OMD’s theme song and maintained its status as a live favourite up to the present day. Attracting the interest of Virgin, OMD signed to their subsidiary label Din Disc in 1979.

After a brief period of touring, notably as support for Gary Numan, OMD quickly established themselves with a number of classic singles. Messages, with its simple but engaging melody, managed to get OMD into the public eye in 1980 by reaching No. 13 in the UK charts. Later the same year they made the UK top ten and scored their first international hit (5 million) with the dance pop of Enola Gay – an up tempo number inspired by the plane that dropped the atomic bomb on Hiroshima.

The success in 1980 helped OMD to rapidly become one of the UK’s premier pop acts. Their use of extra personnel for live per- formances led to Humphreys and McCluskey recruiting people in the studio as well with the band soon established as a four piece outfit with the assistance of Martin Cooper (keyboards, saxophone) and Malcolm Holmes (drums).

OMD’s 1981 album, the ethereal Architecture and Morality proved to be one of their finest moments. Blending choral effects and wistful melody the album produced three classic singles: Souvenir with its bittersweet Humphreys vocal, the religiously inspired Joan Of Arc and its epic follow-up Maid Of Orleans. All three singles secured a top 5 chart posi- tion and by 1982 had turned OMD into household names.

The 1984 album Junk Culture produced the instant pop of sin- gles Tesla Girls, Locomotion, and Talking Loud and Clear proving that OMD could still deliver classic 3 minute pop songs, while retaining a flavour for the unusual.

Producer Stephen Hague was drafted in for the 1985 album Crush and the subsequent 1986 album The Pacific Age. Hague managed to give the songs on both albums a polished edge, while retaining an essential energy that was vital to the songs. Singles such as So In Love and (Forever) Live & Die drew on OMD’s flair for writing engaging melodies, while demonstrating that they were taking much more of a traditionalist approach to song production.

This period also saw the band touring extensively in North America. If You Leave, specifically written for the John Hughes movie Pretty In Pink, was a huge success.

OMD ended an era in 1989 with the departure of Humphreys, Holmes and Cooper leaving Andy McCluskey to forge ahead under the OMD banner. This resulted in the 1991 album Sugar Tax. It was a brash and dynamic approach that fused the clas- sic OMD sound with a more mainstream 90’s dance approach. Sugar Tax managed to win over a lot of new converts, as well as the die-hard OMD enthusiast, with singles such as the spec- tacular Sailing On The Seven Seas and the dance pop of Pandora’s Box (a paean to silent movie star Louise Brooks).

OMD were effectively retired for the latter part of the 1990’s while Andy McCluskey focussed on management and production, most notably for the girl pop trio Atomic Kitten who scored a No. 1 hit single in 2001 with the McCluskey co-written song Whole Again.

Finally, deciding the time was right for an OMD revival, Andy McCluskey and Paul Humphreys reunited alongside former band members Mal Holmes and Martin Cooper. Since 2007 they have embarked on extensive UK, European, North American, Asian and South African tours showcasing their classic songs. They have lost none of the power or the impact that they had demonstrated on those early 80’s performances.

The band has now released two new albums to huge sales and acclaim. Their own sold out shows see them mixing new ‘classics” with the old hits to create a powerful live cocktail of music. At festivals and special events they stick exclusively to playing the hits, leaving audiences amazed at just how many chart successes OMD achieved and how energetically they still perform them.

To listen to a selection of their hits …