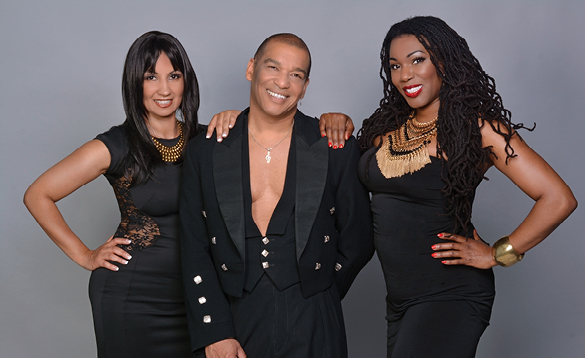 The glory days of top vocal trio Odyssey, one of the most successful soul/disco acts of their era, culminated in the early 1980’s when they topped the charts with the wry Use It Up And Wear It Out, scoring several other Top Ten hits in Britain and throughout the world. The sheer quality of the songs, the vocal quality of the Lopez Sisters, combined with the imaginative and high standard of production ensured that their work sounds as classy today as it did back then.

The group actually started out being billed as “The Lopez Sisters” when there were three of them – Lillian, Louise, and Carmen. They hailed originally from St Thomas in the US Virgin Islands, but grew up in Stamford, Connecticut, where their parents moved when all three girls were small children. They sang together from an early age, eventually appearing at New York’s Carnegie Hall as the headline act in the “New Faces of 1968” concert.

An agent spotted them at that concert and booked them for a five month European tour. When they returned to the States, Carmen left the trio to marry, but Lillian and Louise were then so hooked on performing they resolved to continue, and so recruited a replacement – this time, a man. Manila-born Tony Reynolds joined them and the trio became a popular live act in the New York area.

In 1976 the sisters became affiliated with the Chappell Music organization as songwriters (Lillian co-wrote the title track of the hit Broadway show Bubblin’ Brown Sugar for which she won a Grammy Award) and there met Sandy Linzer. A well known producer and writer, Linzer had been responsible for hits for such artists as the Four Seasons and the Toys, and was currently working with the Savannah Band, which featured August Darnell (who would later go on to huge success as Kid Creole). Linzer immediately loved Odyssey, saw their enormous potential and began writing and producing for them.

From their debut album emerged their first smash single – Native New Yorker, an international hit late in 1977. Unfortunately, Linzer and the group were unable to sustain a sizeable follow-up for over two years. It was a frustrating experience. Tony left the group and was replaced by Billy McEachern of Fayetteville, North Carolina, a former gospel singer. Additionally, Lillian’s eldest son, Steven Collazo was becoming part of Odyssey behind the scenes, recording as a background vocalist and journeyman session musician. Luckily, the chemistry worked, but this time even better.
With Linzer still at the production helm, the group cut their Hang Together album. It contained Use It Up And Wear It Out, a club song with an unusual world-weary lyric which saw heavy action on the US Disco/Dance Music charts.

The flip, Don’t tell Me, Tell Her was stronger on US Black Radio, but the split action prevented Odyssey from getting a pop-soul crossover hit. There was no such problem in the UK however, where Use It Up shot to the top, re-launching Odyssey in a much more convincing way than in 1977. The hits came thick and fast: The long running ballad If You’re Looking For A Way Out, Hang Together, a brilliant re-working of the Lamont Dozier classic Going Back To My Roots, Inside Out, It Will Be Alright and Magic Touch.

Odyssey, with the ladies clad in distinctive Afro-Egyptian dress, became international attractions. With Steven Collazo now as musical director, they backed up their successes on singles and albums with a punishing succession of tours throughout the early 80’s, playing the Middle East, South America, Europe, and of course, all over the USA. In two years, their hit albums included Hang Together, I’ve got The Melody, Happy Together, and The Magic Touch Of Odyssey.

Performing around the UK and Europe through the 80’s and into the 90’s, the journey that is Odyssey continued with the inclusion of Al Jackson. In 1994, Steven moved up to co- front the group and produce new versions of the Odyssey classics while appearing with Lillian on television and touring the arenas, top hotels and holiday villages throughout the UK and Europe.

Lillian and Al have since acquired new talents, interests, and directions, making way for Steven to take the “Odyssey” further, along with Annis Peters and Tahira Jumah.

Annis has had her own successful career as a soloist, vocalist with Billy Ocean and as a member of the very popular Boney M. She has known Odyssey over the years and understands its’ heart and soul.

Tahira has forged a reputation for herself as a singer and songwriter. Among many others, she’s opened for the likes of Joycelyn Brown, Edwin Starr and has backed Sheena Easton and Prince.

With such a strong line-up of talent and experience, Steven, Annis, and Tahira continue the very best of the classic Odyssey sound with a new vitality which combines old school with a modern flava’ that keeps the music alive and flowing.