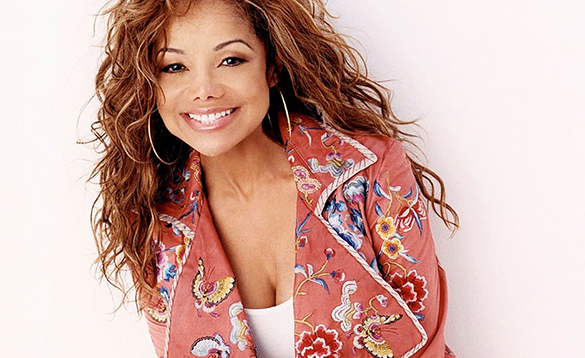 La Toya Jackson is the middle sister of the famous Jackson family. She has been called “The Rebel” with a cause for many reasons.

She went shopping with a 35 foot boa constrictor and gave out black roses as a symbol of love to the Soviet Union.

Her book La Toya Growing Up In The Jackson Family shocked millions creating maximum media attention and sold in excess of 15 million copies world-wide.
La Toya is also spokeswoman for the “Just Say No” Anti-Drug campaign.

La Toya draws full capacity audiences in all her performances all over the world in countries such as Chile, Venezuela, Mexico, Germany, Italy and Spain to name but a few.

La Toya Jackson was then chosen by the top fashion designers as one of the Ten Best Dressed Women In The World.

In 1993, La Toya’s live concert at Ballys in Reno, Nev. was broadcast nationwide by the Choice cable television network in a pay-per-view format. The show was a preview of her ongoing international tour, and featured material from her album, along with numerous wild special effects, illusions and exotic animals. Just prior to that she gave two concerts in Moscow s Olympic Stadium to benefit a prominent Soviet charity for children.

December ’94 saw La Toya Jackson as the guest of the outrageous American singer Ru Paul for his Christmas TV special, playing his sister.

The multi-talented La Toya Jackson is an accomplished singer, songwriter, dancer, actress and choreographer, and plays several musical instruments as well. She has also completed courses in business law.

La Toya Jackson who currently resides in Las Vegas, lived most of her life with her family in California, where they moved from Indiana while she was a child. La Toya also lists her age as “over 21!”

The Jackson’s strong religious belief and supportive nature set the stage for the Jackson siblings to interact and work together as a team, a family unit. Her showbusiness career started at the young age of 16 when she performed side by side with her brothers The Jackson Five at MGM. La Toya’s previous dance hit If You Feel The Funk was back in 1980 from her self titled debut album which peaked at number 17 and another single from the same album which she co-wrote and which was produced by Michael Jackson, Night Time Lover with Stevie Wonder on harmonica, made the charts in the top 40. She also collaborated with Jimmy Cliff and co-wrote Reggae Nights which received a Grammy nomination.

These achievements weren’t enough to satisfy her spirit and her first lesson from childhood taught her that nothing can be achieved without sweat equity and hard work. La Toya put music on the side for a while and then electrified the world by posing nude for Playboy Magazine in 1989. Her layout sold over 8 million copies within one month, more than any other issue in Playboy’s 50 year history and La Toya became the highest paid model of the publication.

The forced path La Toya took had her sign a multi-million dollar deal with the world famous Moulin Rouge in Paris where she became the highest paid performer in the theatre’s history. But where La Toya’s passion lies aside from singing is her desire for helping sick and needy children all around the world. As a humanitarian, La Toya explored several hospitals throughout the country, visiting and giving hope to sick children. She has toured with the late Bob Hope and the USO in support of American soldiers in the Gulf War. As well as working side by side with Nancy Reagan as spokeswoman for the Just Say No anti drugs campaign.

La Toya Jackson also took part in the sixth series of Celebrity Big Brother in 2009 and was the 4th house mate be evicted.