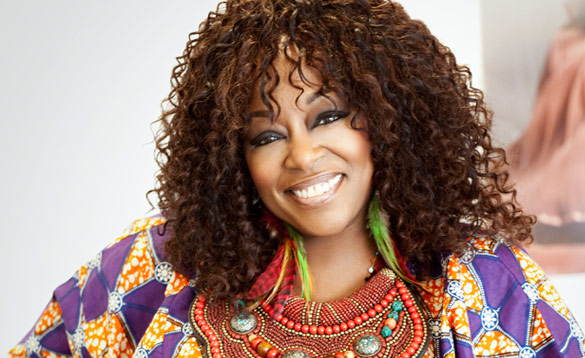 Whenever the young Kym Mazelle sang along to her Aretha Franklin records in the upstairs bedroom in Gary, Indiana, her mother would always shout “keep the noise down, think of the neighbours!” Three doors away lived the all-singing, all-dancing Jackson Five. Needless to say, Kym never did keep the noise down. She explains “I used to phone up their uncle Tim at the house and ask if they needed another singer, but I guess they didn’t.”

After leaving Gary, Indiana, she went to Missouri University and then onto Chicago to study opera at Mundelein College of Music where she dissolved into giggles once too often in too many classes. “Opera is a whole different thing,” Kym says, “but the discipline I learned from it and the passion I’ve been able to put into everything I’ve done has been invaluable.”

After college, needing to work, Kym Mazelle found herself a job at DJ International Records in Chicago and began to build up contacts that eventually led her to Marshall Jefferson. It was Jefferson (the famed producer of “House Music Anthem” and Chicago house group Ten City) who produced her first two -singles, Tast My Love and I’m A Lover, both released in early 1988. Kym quickly became known as the queen of deep house. In 1989, on the strength of those two singles, she toured Europe with Ten City. Her talent, however, always had the capacity to stretch much further, and with a voice trained in opera it was very clear that she was not in danger of becoming just another disco diva.

Kym explains, “To me when the scene first started, and even today, lots of house music was simple studio gimmicks with singers who weren’t really that talented. It was just about a beat. But I wanted to do music that was real, music with real soul. If you want to sell fashion, get a girl on the runway or in a magazine who can move her hips. In the same way this game is about singing.”

In 1989, during the Ten City tour in which she stole the show, she was signed to a record deal by Rob Sawyer, a talent scout for EMI Records UK. Her debut album, Crazy, was released on EMI’s Syncopate label and proved a perfect showcase for her talents. In 1991, EMI’s Parlaphone label issued a second album entitled Brilliant which included remixes of many of the sings featured on the Crazy album. Classics like Useless, Love Starin (which Kym co-wrote and which was later covered by Island recording artists Clubland featuring Zemya Hamilton) and Was That All It Was? got the remix treatment from top American mixers/producers David Morales, Cole & Clivilles (C&C Music Factory) and Steve Hurley. The Brilliant album also featured two brand new recordings, Skin I’m In (co-written by Kym) and If It’s Love You Want (which was also co-written by Kym and produced by Nigel Lowis). The album (as did the Crazy album) also contained a remake of No One Can Love You More Than Me (a passionate, swirling ballad produced by noted producer Rik Wake, originally recorded by the Weather Girls some 10 years ago and featuring Jocelyn “Somebody Else’s Guy” Brown on backing vocals).

Also in 1989, RCA/BMG released a duet of Kym with The Blow Monkeys entitled Wait. The record also appeared on the Crazy album and went Top 5 in the UK and garnered her an appearance on Top Of The Pops. In 1991 Kym toured the world with Soul II Soul having been the featured vocalist in their Top 10 UK hit Missing You, which she co-wrote.

As a writer Kym says, “I have songs going around in my head all the time. The difficulty is finding a producer who shares my vision. Sometimes I write a song that I think will be perfect for someone else but my manager always says hold onto it because you can make these songs a hit for yourself.”

Writing with Rapino Brothers turned out 1993’s Love Me The Right Way, a Top 20 hit in the UK and across Europe and a Top 100 position on Billboard’s Hot 100 Chart in America. That record garnered Kym her second appearance on Top Of The Pops. That record was recently remixed by Kamasutra, one of Italy’s producers, the Rapino Brothers, and New York’s Danny Tenaglia and was released (September 16, 1996) on Logic/Arista Records (UK).

In 1994, sure as the seasons change, Kym came back with another Top 20 UK hit record on the back of a one-off deal with Arista Records: a duet entitled Enough Is Enough (originally recorded by Barbara Streisand and Donna Summer) with Jocelyn Brown, her former collaborator. Following up on the success of that record and a fantastic third appearance on Top Of The Pops, Kym and Jocelyn decided that the whole project was such fun that it had to be repeated. The result was another outrageous cover, released again on Arista Records, of ZZ Top’s classic Gimme All You Loving.

Kym’s recent recording activity include one track (a cover of Candi Staton’s Young Hearts Run Free which was produced by Nellee Hooper of Soul II Soul, U2, Bjork and Sinead O Conner fame) for the soundtrack album for Romeo And Juliet (which is being released around the world on Capitol/EMI Records) and yet another one off for EMI Records in Italy entitled (Have) A Nice Day, which was produced by Alex Party. Kym has also recorded three tracks (Ritmo Del Sur, Machaca and Bailando Kym) on the compilation album for the experimental group Flamenco Blues Band on concert promoter Pino Sagliocco’s new Sagliocco/Buena Vista Records label in Spain. The project represents a fusion of Gypsy flamenco with the American Blues sound. The Ritmo Del Sur track, a duet with Diego Machaca, was released in September in Spain as the first single from the band’s album.

In addition to her recording career, Kym keeps herself busy with charity work. She has performed on numerous occasions for the Rainbow Trust, an organisation devoted to the rehabilitation of the families of children with terminal illnesses. She is also an honorary member of Elyfriends, a wildlife conversation group. Kym regularly works for the Terrence Higgins Trust. As Kym puts it “In this business I am constantly getting asked to appear and perform for charity organisations. Basically, what I have done is chosen three of them that mean the most to me personally and given as much energy and time to them as possible. I must have done 20 shows for these three organisations over the last 5 years.”

Kym now lives permanently in London. She describes her allegiance to Britain thus, “This is where my records first took off and where the bulk of my support lies. I feel really close to the audiences here, although I do have thousands of fans in Japan. Still, it would be nice to get a deal that allows for my records to be released in America. I’m well know in the clubs there, but radio has no idea who I am. I have lots of fans who know me from my club singles and the Soul II Soul record. I plan to make a record soon that will appeal to audiences all over the world.”