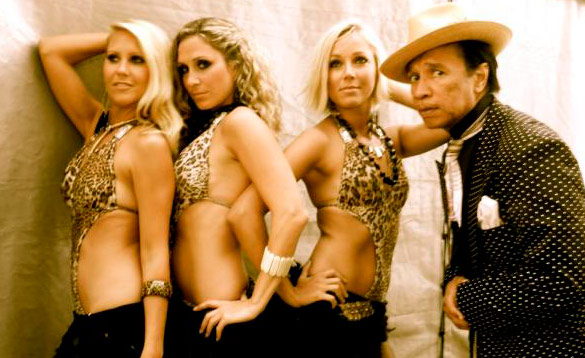 Kid Creole And The Coconuts was born in 1979. The parent: Dr Buzzard’s Original Savannah Band. But the parent was also the child. August Darnell was a bassist, lyricist and background vocalist for Dr Buzzard. His brother, the late Stony Browder Jr. was the mastermind, the Doctor, to be exact. Sibling rivalry was the direct cause for the eventual demise of the Savannah Band and the rise of Kid Creole. The brothers were very competitive and each wanted to prove to the other that he could do it alone. In fact, neither one was really alone. Stony kept Cory Daye, the smooth, sultry vocalist whose dulcet tones and distinct style had already helped the brothers achieve a number one hit (Chechez La Femme). August drafted in the manic Sugar-Coated Andy Hernandez (who became Coati Mundi) and as a result gained an excellent arranger, incomparable showman and comic-foil (for the legendary live shows.) And so the brothers parted.

Aboard the Creole schooner you’ll find original great Bongo Eddie. Bongo is the passionate percussionist, quipster, vocalist and reminder of days gone by. Today’s “Coco’s” are still blond, sexy, gorgeous, and 5 feet 8 inches tall and still sing and dance effortlessly for hour upon hour (the original “Coconut” line-up, featured August’s then wife, Adriana Kaegi, who created the choreography and the style for the girls that still plays a large part on the current show). With a talented swing-jazz influenced horn section, funk inspired guitar licks and rhythm section that gets your hips shaking blended with the creativity fun lyrics of Kid Creole, the sassiness of the Coconuts and the showmanship of Bongo Eddie and this one (Life Boat) Party not to be missed!

Not only have they recorded 15 albums (and achieved gold and platinum status in so doing) but they have also made scores of television appearances in every country known to man (from England’s Top Of The Pops to America’s The Tonight Show and prestigious “specials” with such names as Barry Manilow, as well as their very own made for TV musical There’s Something Wrong In Paradise, thrown in for good measure).

Most importantly they have played thousands of concerts all over the world. They have garnered a reputation as the second greatest show on earth (the first, of course, being Ringley Brothers, Barnum and Bailey’s three-ring Circus!). Their shows became the stuff of legend; spectacular events full of sexual innuendoes, witticisms, syncopation, theatricality and passion – ENTERTAINMENT in the old school sense of the word.

Kid Creole and the Coconuts are currently working on their sixteenth studio album to be called Introducing Kid Creole and the Coconuts. Indeed, because the beat goes on now for a whole new generation who were not fortunate enough to experience it the first time around. As Kid Creole himself aptly says, “It is indeed a pleasure to be aboard this mothership, in the company of other great pioneers – Nile Rodgers, Macy Gray, Donna Summer – so man your stations, young and old of all nations and persuasions and welcome to the Lifeboat Party, yeah!”