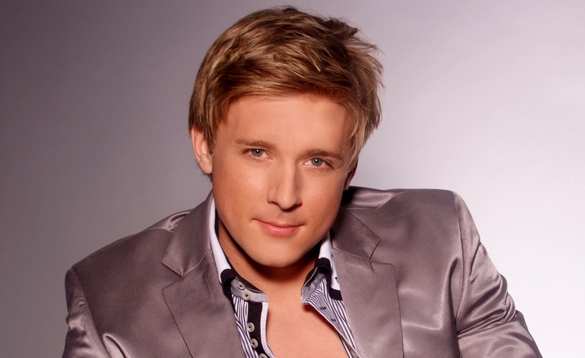 Jonathan Ansell is one of the UKs most admired young tenors, with a unique ability to truly connect with his audience through the gift of his soaring high tenor voice.

Jonathan who now has sold over 2million albums shot to fame on the first ever series of the X-Factor in 2004 where he, as part of pop-opera  group G4, came second and went on to top the charts with 3 albums and 4 sell out tours.  When they split in 2007, he was propelled to instant stardom as a solo artist signing a £1 million record deal with Universal Classics and Jazz and soon released two chart topping albums  ‘Tenor at the Movies’ and ‘Forever’. This glorious young tenor continued to wow audiences as a bona fide solo artist.

Jonathan, who has been nominated for a Classical Brit Award, has continued to wow audiences both in the UK and internationally with his sensational voice proving himself as a bona fide sola artist.  Some of Jonathan’s solo career highlights include the nationwide Valentines Tour with Hayley Westenra; a tour of the United States with the late Marvin Hamlisch accompanied by the NSO and PSO, several performances at the Royal Albert Hall including: the Classical Brits; Classic FM at the Movies and the Festival of Remembrance in front of Her Majesty the Queen and most recently performing as ‘Jesus’ in the World Premier of ‘Omega and Alpha’ in Wells Cathedral.

Theatre has recently become an exciting new direction for him, his debut role being as ‘The Man’ in Andrew Lloyd Webbers ‘Whistle Down the Wind’, which was a huge critical success.  Jonathan has also played ‘Boamer’ in the National Theatre adaptation of Lark Rise to Candleford, ‘Nanki Poo’ in Carl Rosa’s ‘The Mikado’ and ‘Charles Darnay’ in Charles Dickens ‘A Tale of Two Cities’.

In the sporting arena he has performed the National Anthem at a number of sporting venues for England Football and both England Rugby Union and League. He has also sung Nessun Dorma on Sport Relief (BBC) and for Soccer Aid (ITV).

Jonathan has also performed at a number of Friday Night is Music Night broadcasts for the BBC including the Andrew Lloyd Webber Birthday Concert in Hyde Park and Lyrics by Don Black at the London Palladium. TV appearances include: Last Choir Standing (BBC): Songs of Praise (BBC); the Alan Titchmarsh Show (ITV); This Morning (ITV); GM:TV (ITV) and Breakfast (BBC).

As an Ambassador for the charity Breast Cancer Care Jonathan has participated in a number of TV shows donating his winnings from Celebrity Who Wants to be a Millionaire (with Connie Fisher) (ITV), Ready Steady Cook (against Hayley Westenra) (BBC) and Come Dine with Me (Channel 4).  He has also completed the London Triathlon, the London Marathon twice, the JPMorgan Asset Management Round the Island Race and maddest of all, the benchmark jumper at the 2009 Worthing Birdman Challenge. This June he is due to zip line off the Humber bridge to top his crazy antics, raising money for local boy Austin Akinson’s new wheelchair.