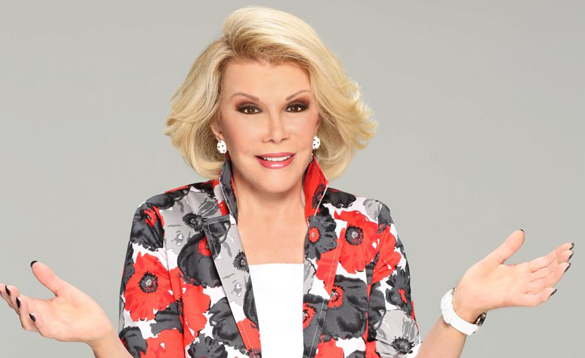 JOAN RIVERS is a force of nature – one of the hardest working celebrities in the world. She has enjoyed an illustrious career spanning more than four decades in the entertainment industry and beyond, and as her recent accomplishments reveal, she’s as robust and hardworking as ever.
An entertainment legend of unparalleled accomplishment and talent, Joan is an internationally renowned comedienne, Emmy-award-winning television talk-show host, Tony-award-nominated actress, bestselling author, playwright, screenwriter, film director, columnist, lecturer, syndicated radio host, jewellery designer, cosmetic-company entrepreneur, and red-carpet fashion laureate. Her continued relevance is made clear by her growing group of more than 1.5 million followers on Twitter. Above all things, however, Joan is a proud mother and grandmother.
After creating and hosting Live from the Red Carpet for E! (1996-2004), Joan returned to anchor that network’s popular and successful franchise Fashion Police, hosting both its hour-long weekly broadcasts and its awards-season specials. From hot new trends to red-carpet risks, Joan hilariously takes viewers through a recap of the week’s celebrity fashion and ultimately decides who sizzled and who fizzled.
Joan also dominates the world of reality TV with her daughter, Melissa Rivers, in their weekly hit series on WEtv, Joan and Melissa: Joan Knows Best? – Now in its third season. This inimitable duo addresses the question that has plagued daughters since the beginning of time: Does mother truly know best?
Joan is also a vastly accomplished author, and her 11th book, I Hate everyone…Starting with Me, was published by the Penguin Group in June, 2012. It instantly became a New York Times Bestseller. Prior to that, she wrote the bestsellers Men Are Stupid and They Like Big Boobs: A Woman’s Guide to Beauty Through Plastic Surgery and Murder at the Academy Awards: A Red Carpet Murder Mystery, both published by Simon & Schuster.
Last year, Joan became the first “Go Daddy.Co Girl,” hilariously representing the successful web-hosting company, GoDaddy.com. The commercial premiered during Super Bowl XLII to millions of viewers nationwide.
The 2010 critically acclaimed, no-holds-barred documentary, Joan Rivers: A Piece of Work premiered during the Sundance Film Festival and was released in theatres nationwide that summer. The film is currently available on DVD and Netflix.
In 2009, Joan starred in NBC’s hit reality-TV competition series The Celebrity Apprentice, along with Melissa Rivers. Joan emerged as the second season’s winner.
Also in 2009, the iconic funny woman was honoured during The Comedy Central Roast of Joan Rivers. That year as well marked the debut of her TV Land reality show, How’d You Get So Rich?, which, for two seasons, took a candid look at the extravagant lifestyles of fabulously rich American entrepreneurs and innovators.
No stranger to the world of animation, in addition to lending her unique voice to Shrek 2 and Spaceballs: The Animated Series, Joan received a Daytime Emmy Award nomination in 2009 for her portrayal of “Bubbe” on PBS’ award-winning animated children’s series Arthur. In 2011, she voiced Annie Dubinsky, the hard-talking agent of Krusty the Klown on The Simpsons.
Joan Rivers is a true pioneer: She created her own brand of irreverent, unconventional comedy and forged her own remarkable rise to stardom in the entertainment world. Enduring tawdry clubs, Borscht Belt showrooms, and grimy Greenwich Village cabarets, her career skyrocketed in 1968 when she appeared on The Tonight Show Starring Johnny Carson. Within three years she was hosting That Show with Joan Rivers, one of the first syndicated daytime talk shows. She soon made television history as the permanent guest host of The Tonight Show and helped launch the nascent Fox Network in 1986 with The Late Show Starring Joan Rivers. In 1989, Joan triumphantly returned to daytime TV with The Joan Rivers Show, winning an Emmy Award for Outstanding Talk Show Host.
Since she was a child, Joan has loved the theatre. In 1986, she starred in Neil Simon’s Broadway Bound, and in 1994 co-wrote and starred in Sally Marr and her Escorts, for which she was nominated for a Tony Award for Best Actress in a Play. Joan continues to explore personal theatrical endeavors, most recently with The Joan Rivers Theatre Project, which she co-wrote and starred in. The show ran for a limited workshop engagement at the Magic Theatre in San Francisco before opening to rave reviews as Joan Rivers: A Work in Progress by a Life in Progress at the Geffen Playhouse in Los Angeles. She enjoyed six sold-out weeks in L.A., followed by another sold-out run in 2008 at Scotland’s Edinburgh Fringe Festival, as well as a successful three weeks at London’s Leicester Square Theatre.
Joan’s unique brand of humour, along with her compassion and tenacity, has enabled her to triumph over personal tragedy and reach extraordinary professional success. These traits, along with her love of fine art, antiques, and vintage jewellery, have driven Joan to keep her finger on the pulse of the latest trends, and she is widely considered America’s most visible, accessible, and authoritative fashion spokesperson. In 1990, Joan launched the Joan Rivers Classics Collection of fashion jewellery, apparel and accessories on QVC, and was honoured with an ACE Award for her work by the Accessories Council. Joan’s collection was an instant, enormous success and remains so today not only in the U.S. but on QVC in the U.K. and on The Shopping Channel in Canada.
From her trademark question, Can we talk? to her red-carpet creation, Who are you wearing?, the woman who asks all the right questions gets the answers America – and the world – want to hear.