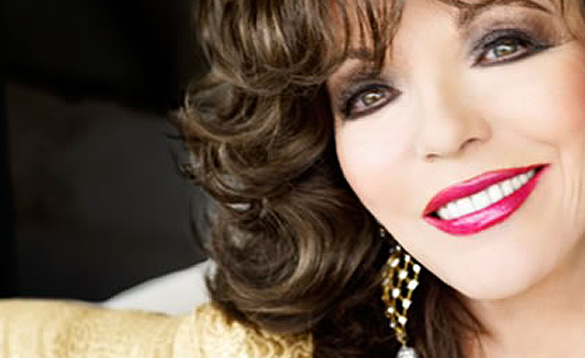 Golden Globe winner and Emmy-nominee, Joan Collins, possesses a star quality that circles the globe. In five decades, she has come to define what it means to be a living legend. As an accomplished actor, author, producer, humanitarian and entrepreneur, Joan Collins has built a career that places her in the unrivaled ranks of international superstar and icon. In recognition of a lifetime of contributions to the arts, culture and charitable causes, Her Majesty Queen Elizabeth II honored Joan Collins with an O.B.E. title in 1997, making her an Officer of the British Empire.
Joan Collins has appeared in more than 60 feature films and dozens of television series, including creating the role of Alexis Carrington on Dynasty, one of the most highly rated television dramas of all time. Her novels and memoirs have sold over 50 million copies worldwide and have been translated into 30 languages. She is a regular diarist for The Spectator and a contributor to The Daily Mail, The Telegraph, The Times and Harper’s Bazaar. On stage, Joan Collins has performed on Broadway, the West End, and in national tours in the UK and North America. She is recognized world-round as a fashion maven of timeless beauty, and is a brand ambassador and spokeswoman for top cosmetic, health and beauty companies. On the humanitarian front, Joan Collins is devoted to the well-being of women, children and families and regularly lends her support and celebrity to causes that include finding a cure breast cancer and empowering children with learning disabilities.
Ms. Collins is married to Theatrical Manager Percy Gibson, and they live happily between their homes in Los Angeles, London, New York and the South of France.
With a career that spans five decades, Joan Collins has worked with some of the most recognizable figures in cinematic history, including: Richard Burton (Sea Wife); Paul Newman (Rally ‘Round the Flag, Boys!); Bob Hope and Bing Crosby (Road to Hong Kong); Bette Davis (The Virgin Queen); Gregory Peck (The Bravados), James Mason and Dorothy Dandridge (Island in the Sun); Robert Mitchum (Big Sleep), Edward G. Robinson (Seven Thieves), Sir Nigel Hawthorne (The Clandestine Marriage); and Kenneth Branagh (In the Bleak Midwinter).
Joan Collins’ star power figures prominently into television history, with starring and special guest roles on: Star Trek, Batman, Mission Impossible, Love Boat, The Nanny, Will & Grace, Roseanne, Footballers Wives, Hotel Babylon—and the ABC movie of the week These Old Broads, with Elizabeth Taylor, Shirley MacLaine and Debbie Reynolds.
Ms. Collins’ career began on the London stage at the age of 13, and live theatrical productions have been a centerpiece of her life’s work. She has received critical acclaim starring in The Last of Mrs. Cheyney (West End); Private Lives (West End and Broadway debut); Love Letters (U.S. Tour); Over the Moon (London’s Old Vic Theatre); Legends (North American Tour). She Toured her popular autographical show, An Evening with Joan Collins promoted by Tony Denton promotions in 2006