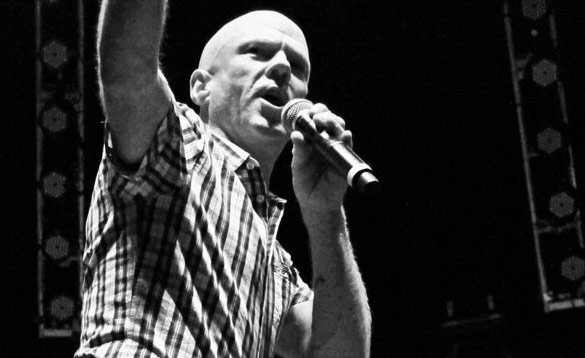 The unmistakable voice of of Bronski Beat and The Communards with massive hits such as Small Town Boy or Don’t Leave Me This Way returns with a new EP.

Bronski Beat not only introduced the world to Jimmy’s unusual voice, but confronted them with a lyric addressing the isolation and rejection felt by a provincial gay youth forced into leaving town (Small Town Boy). Although not the first pop song to deal with this topic, the chart friendly early 80’s electronic dance sound and the everyday ordinariness and honesty of the three performers, made Small Town Boy the biggest obviously gay record there’d ever been.

The Communards enjoyed a string of hits from their two big selling albums – Communards (1986) and Red (1987). One moment the Communards were hurtling to the number one spot, a position they held for weeks in the UK in 1986, with an energetic, hedonistic cover version of the Philly soul classic Don’t Leave Me This Way, the next stunning audiences into silent awe with their touching lament for a loved one lost to Aids, For A Friend.

In 1989 Jimmy Somerville embarked on a solo career with 5 more hit singles and two albums; Read My Lips (1989) and The Singles Collection (1990). These included another stirring disco cover of Sylvester’s You Make Me Feel (Mighty Real), and Francoise Hardy’s Comment Te Dire Adieu, a duet in French with June Miles Kingston.

Jimmy’s continued outspokeness on gay issues didn’t prevent his records being played and selling in huge quantities. His honesty as a gay performer almost certainly helped to pave the way. The album Dare To Love was released in June ’95 and is a typical rollercoaster mix of upbeat pop dance numbers and more serious songs exploring gay issues.

The first single from Dare To Love was Heartbeat and was number one in the USA dance chart. The E-Smoove and the Armand Van Heldon mixes are still being played in clubs today. This was followed by the fabulous cover version of Susan Cadogan’s 1975 top four reggae hit Hurts So Good and single By Your Side was released in late October ’95 and supported by a UK tour. In spring ’97 Jimmy released a single on various European labels entitled Safe – the track was taken from the album Dare to Love and was remixed by Todd Terry and DJ Tonka. It reached no. 1 in the Spanish charts and was played across Europe.

Having left London Records, Jimmy Somerville then signed a new deal with Gut Records and a new single Dark Sky was released in late 1997. The album Manage The Damage followed in 1999 produced by Ash Howes and co-written with friend Sally Herbert and included the further singles “Lay Down” and Something To Live For.
Manage The Damage was released in the USA in 2000 to subsequent wide critical acclaim. To support the release Jimmy embarked on a mini US / Canadian tour which also promoted the subsequent release of Root Beer, an exclusive album featuring remixes and b-sides from Manage The Damage.

Later in 2000 Jimmy released a new version of Why (Almighty Mixes) on Almighty Records in the UK and the CD also included a version of Can’t Take My Eyes Off Of You which was released as a French single as well as part of the ‘Queer As Folk 2’ soundtrack for the TV Series in the UK. That year, Warners also released a new compilation The Very Best Of Jimmy Somerville, Bronski Beat and The Communards.

Jimmy’s next solo album entitled Home Again which featured collaborations with Rosenstolz / Felix Gauder / Mauro Picotto / Rolf Elmer (Jam n Spoon) and Tillmann Uhrmacher followed in 2004 on Jinx Music / BMG (Germany). The first single to be released from the album Come On was released in Germany in 2004. Jimmy wrote and recorded the track with Rosenstolz.

In 2006 Jimmy Somerville performed a couple of exclusive shows in Sydney and Melbourne in Australia both in elaborate theatres. These featured an acoustic set as well as his more well known high-energy dance set, the finale featuring a huge choir. Compared by Bob Downe both shows were a huge success.

25 years after the release of Small Town Boy Jimmy released his fifth solo album in May 2009 entitled ‘Suddenly Last Summer’ inspired by and originally recorded on his trip to Australia in 2006. It features his unique acoustic interpretation of some classic songs including ‘Sweet Unknown’ / ‘Hush’ and ‘Hanging On The Telephone’. Released worldwide on digital download via The Orchard.

Suddenly Last Summer was then released on a limited edition CD/DVD via Cherry Red Records / Strike Force Entertainment in April 2010 featuring bonus tracks and a DVD of two videos from the album in special packaging. For 2011 Jimmy Somerville is back with a new EP and some great contemporary electronica, his first new material for 5 years. Collaborating with long term producer and friend John Winfield, Jimmy has emerged with his freshest material in years and the freedom to co-produce is evident in the results. The Bright Thing EP will be released digitally worldwide via The Orchard. This is the first of a series of EPs planned for 2011.

In 2011 Jimmy Somerville will take to the road with the Here And Now 10th Anniversary UK arena tour, starting in Birmingham on 24th June and finishing in Brighton on 2nd July. Other artistes performing include: Boy George, Jason Donovan, Belinda Carlisle, Midge Ure, A Flock Of Seagulls and Pepsi & Shirlie.