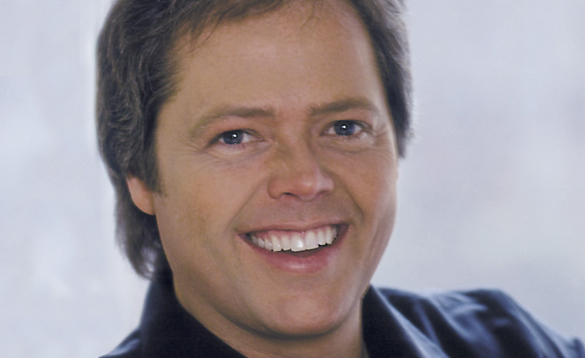 Jimmy Osmond is a multi-faceted entrepreneur, who has obtained success both on and off stage.

As the youngest member of the world-renowned Osmond family, Jimmy received the first of many accolades at the age of seven when he was the first to be awarded a gold record in the Osmond name, It was for a song he recorded in Japanese, “My Little Darling”.
As a solo artist, Jimmy has accumulated six gold records, one platinum record, and two gold albums and is in the “Guinness Book Of World Records”, as the youngest artist to have a number 1 record on the UK charts. In addition, Jimmy and his siblings have sold over 100 million records and share 51 gold and platinum recordings along with numerous other prestigious awards and honours, including a star on the Hollywood Walk of Fame.

Jimmy was also honoured by the United States Junior Chamber of Commerce as one of Ten Outstanding Young Americans in 1999.
At a young age, Jimmy had developed and supervised most of the Osmonds’ merchandising business. Soon after, he launched a successful advertising agency with an elite roster of clients. During this same time, he starred in his first motion picture entitled “The Great Brain” and went on to star in other acting roles including two award-winning episodes of the TV series “Fame”.
Jimmy quickly fell in love with musical theatre when he starred in “Joseph and the Amazing Technicolor Dreamcoat” and then went on to star in “Boogie Nights”. The show broke box office records and paved the way for Jimmy to bring his award-winning “Jimmy Osmond’s American Jukebox Show” to the UK.

In December 2008, Jimmy made his debut in British Pantomime as the lovable Buttons in Cinderella and appeared in London’s West End as the Teen Angel in Grease at the Piccadilly Theatre. He then went on to star as Billy Flynn in the smash-hit musical Chicago in 2009.

UK audiences have certainly taken Jimmy into their hearts and he has appeared on many TV shows including ” I’m A Celebrity… Get Me Out Of Here!”, “Celebrity Family Fortunes”, “Everybody Dance Now”, “Popstar to Operastar” and “Celebrity Come Dine With Me”.
Jimmy is currently president of Osmond Entertainment and has produced hundreds of hours of programming for such major networks including ABC, PBS, BBC and the Disney Channel.

Jimmy has also produced and financed all types of live productions from record-breaking concert tours to Las Vegas extravaganzas. He has operated his own TV studio facility, live theatres and at the same time has continued to tour with his brothers to the delight of their many fans.

Jimmy holds several board positions, and as a member of the National Board of Governors for the Children’s Miracle Network, he has assisted in raising over 4 billion dollars to benefit Children’s hospitals in the US and Canada.

Jimmy is chairman of the board of Osmond Real Estate and Development and is a director of Security National Finance Corp.