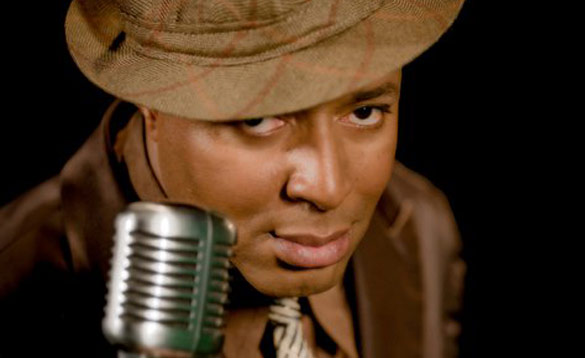 Who is Leee John? is he a singer? A songwriter? A producer? Or a personality? If you can spend just a little time reading his biography you may just find out.

Did you know that Leee lived in New York during his formative years, it was here that he made his first recording at the tender age of eight, went to acting school and performed at many prestigious Theatre Workshops?

Did you know that Leee was invited to sing with both Blood Sweat & Tears and War when they performed at the Rainbow Theatre, London and Leee was only fifteen? It was here that Leee caught the eye of F Beat label, which was owned by Elvis Costello, who introduced Leee to Trevor Horn. This introduction led to the recording of some demo tracks which were heard by Morgan Kahn a top P.R man and Steve Walsh a London DJ who happened to be closely connected with the R&B label. During this time Leee met up with Ashley Ingram and the recognition of each other’s talent was immediate. The R&B label signed Leee and went into the studio where he met Tony Swaine it was at this point, after hearing a few bars of music, that Leee introduced Ashley to the R&B label. The seed to a successful songwriter and production partnership that has few parallels had been planted. By the way the few bars became Body Talk and Leee and Ashley got together with drummer Errol Kennedy and were probably better known as Imagination.

Did you know that Leee has had his own T.V. chatshow Leee’s Place on L.W.T where he interviewed a diverse line up of guests including Shaun Young, Victor Kiam, Mica Paris (her first T.V. interview), Courtney Pine and Will Downing, or that during this interview Leee and Will performed an impromptu ‘Live’ duet of Wishing On A Star.

Did you know that Leee and Imagination were banned from Top Of The Pops or that Leee was forced by Royal protocol to ‘cover up’ before meeting the Prince and Princess of Wales or that Leee has taken afternoon tea with Prince Charles in his private residence.

Did you know that Leee has written and produced four tracks for top selling polish artiste Edita, has written, recorded and produced with Nik Martinelli who writes and produces Diana Ross, Patti Labelle and Stephanie Mills amongst others or that Leee was a backbeat disciple as well as being a co writer on the Arthur Baker album Give Into The Rhythm – Arthur has credits from the rolling stones through to Al Green. Leee is currently writing and producing an album for dance diva “Eddie” who is signed to Virgin Japan, Leee also has a song Much Better recorded by Club 69 which made No 1 in the Billboard dance charts and on February 4th the track “Inner City (on & on)” written and produced by Leee was released on catch records and entered the U.K. Dance chart at No: 27

Did you know that Leee toured South Africa in 1994 and against all advise he went with armed guards and visited one of the Townships, had Dinner with the Mandelas at their house or that he has formed a close friendship with Zinzi Mandela.

Did you know that Leee is the founder member of ‘The Crooners’ a group of personalities from all spheres of the entertainment world who every year for the past 9 years have visited Hospitals, AIDS centres and Hospices to sing carols for the patients.

Did you know that Leee’s proudest moment was when his mum Jessie received her MBE?

Did you know that apart from performing as Imagination Leee has his own band The Leee John Project who are a blend of musicians who play some old, some new, some jazz and some blues at selective venues around the U.K. but mainly in Europe.

Did you know that as a tribute to Leee and Imagination, for that first time in French history, a Horse Race has been dedicated to a performance artiste ‘Le Prix De Caen’ has been renamed ‘Prix Imagination’? The race meeting in Deauville is the equivalent of Goodwood or Epsom.

Did you know that Leee had a number 9 single on the Billboard Dance Charts in May 1996, titled The Mighty Power Of Love, or that his recent single Call On Me Entered the Music Week Dance charts at number 14. Leee was delighted with this and he is currently trying to find the time to complete writing and recording his solo album.

In amongst all of this activity Leee still keeps the Imagination name alive by constantly being in demand for his on stage performance both for club dates and live shows more recently having performed at the 12997 Diamond Awards ceremony, The Roadhouse in Covent Garden and coming up the Golden Festival in Holland and a tour of the former USSR state of Azerbaijan.

Leee John – is he a Singer? a Songwriter?, a Producer? Or a Personality?