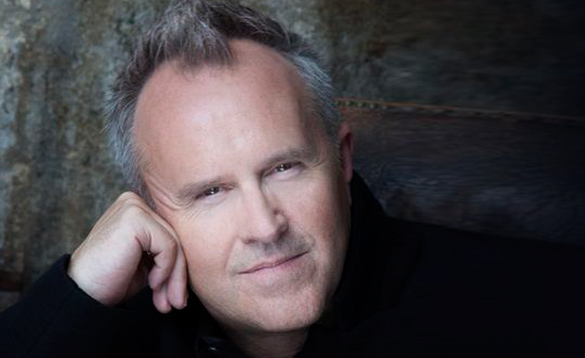 It was in 1983 that Howard Jones released his first single New Song in the UK. The expectation was that it might sell a few thousand copies and introduce his fresh new music to an unsuspecting world. The reality was quite different. The single steadily climbed the UK chart to peak at No. 3.

Then came the second single What Is Love? which reached No. 2 in the UK and the third single …the enigmatic Hide and Seek which showed the spiritual side of Howard Jones’ writing. This was followed by the first album Human’s Lib which came straight in at No. 1 in the UK in April 1984, eventually going platinum and which took the synthesiser and Howard to a new plateau. This success spread across the globe with Human’s Lib going gold in USA, Japan, Germany, Italy and Australia.

The second album Dream Into Action was even more successful spawning a series of hits including Like To Get To Know You Well, Look Mama, Things Can Only Get Better and the classic No One Is To Blame which reached No.1 in the U.S. singles chart and has since had over 3 million radio plays in USA. Dream Into Action went platinum in USA and lived in the US top 20 album chart for the best part of a year making Howard Jones one of the very few British artists to have comprehensively ‘broken’ America in the past 25 years. In 1986 Howard was voted Keyboard Player of the Year in Rolling Stone magazine, and in 1987 and 1989 he toured the world extensively headlining Madison Square Garden in New York , the Forum in LA and The Budokan in Tokyo. He performed Hide and Seek at Live Aid in 1985 which has since been featured on the Live Aid DVD released in 2006.

There were three more albums on Warner/Elektra One To One (1987), Cross That Line (1988) and In The Running (1992) all three of which were accompanied by successful world tours. The 1992 single Lift Me Up, taken from In The Running album went top ten in USA. In 1993 the Best Of Howard Jones was released which, together with the Howard’s other albums have seen his worldwide album sales to date exceed eight million.

Always one to present the unexpected Howard Jones then formed a full band which featured Nick Beggs (Kajagoogoo/Ellis Beggs and Howard) on bass and Chapman stick, Robin Boult on guitars and the legendary Kevin Wilkinson (China Crisis/The Waterboys/Squeeze) on drums. This superb band toured the world throughout 1998 and the first half of 1999 which included a major tour of the USA with Culture Club and the Human League.

In 2000 Howard Jones appeared on the infamous Night of the Proms tour of Europe with a 72 piece orchestra and a 50 piece choir. This was followed in the summer of 2001 with a huge Ringo Star tour of USA and Canada. The band featured Greg Lake on bass, Sheila E and Ringo on drums, Ian Hunter and Roger Hodgson on guitars and Howard on keyboards. Apart from playing his three biggest US hits No One Is To Blame, Things Can Only Get Better, and Everlasting Love each night, Howard also got to fulfil a lifetime ambition by playing Emerson Lake and Palmer’s ‘Karnevil 9’ with Greg Lake and Sheila E. Keith Emerson’s classic keyboard arrangement is regarded as one of the most difficult contemporary keyboard pieces ever written.

In September 2001 Howard set off once more into uncharted waters. He formed a new touring band with Robin Boult on guitars, Shaz Sparks (from dba) on backing vocals and Robbie Bronnimann (from dba) on programming and mixing. Howard had the idea of doing a tour wherein each gig was recorded and digital photographs would be taken at each concert. Then on the same night CD’s would be burnt, and artwork produced from the photographs taken that night, and the finished CD’s would then be sold all on the same night! Incredibly it worked and 19 different CD’s were produced and sold during the tour which sent Howard Jones collectors into a tailspin. At the end of the tour a best of was compiled under the title The Peaceful Tour Live which has been licensed to various labels around the world. In 2002 Howard co-wrote and co-produced ‘Blue’ with the Sugababes which turned out to be track two on their UK platinum album ‘Angels with Dirty Faces’.

Howard Jones made his debut on the Here And Now Tour in 2002 and has since been a regular both in the UK and abroad.

Howard Jones appeared on ITV’s ‘Hit Me Baby One More Time’ in the UK on April 2 2005 which was the biggest UK TV appearance for 15 years. Howard performed What is Love with his electronic band and Dido’s ‘White Flag’ which he performed on piano accompanied by guitarist Robin Boult. He also appeared on the US version of Hit Me Baby One More Time which aired primetime on NBC across the US and Canada. In the NBC on-line viewers poll Howard was voted No 1 on the show. The howardjones.com website had over 45,000 hits in the 24 hours following the US show which almost brought down the server.

With a large and loyal fanbase and album sales now exceeding eight million this consummate musician and writer has maintained an admirable independence, writing, recording, performing and touring in the way only he knows how. He has proved that he is one of the most talented writers and performers out there. His independent attitude and his ability and willingness to take risks ensure that he continues to operate on the cutting edge of today’s music.