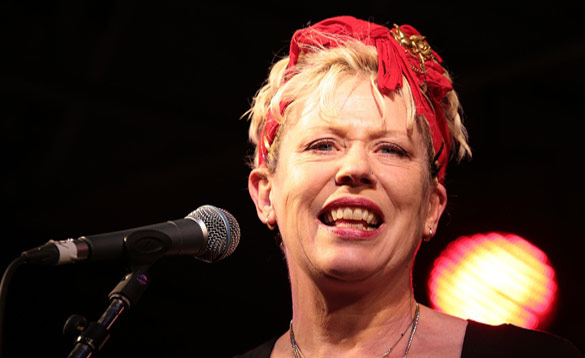 Born in Coventry, England, Hazel O’Connor had a story to tell long before she hit the headlines as the first major female star of the 80s. She left home at 16, lived in a squat in Amsterdam, travelled to Morocco then headed across the pole to Japan where she worked as a dancer. Next stop was Beirut in the Lebanon, to dance at The Crazy Horse. However, civil war broke out and she was forced to leave. She travelled from West Africa, overland, crossing the Sahara desert, to North Africa, finally getting back to London and wondered what to do with the rest of her life – well she was 21 now! Inspired by her older brother Neil O’Connor and the punk movement, she decided to try her hand at singing and song-writing “because singing made me happy” she said.

She was picked by director Brian Gibson to star in the film Breaking Glass, Dodi Fayed’s first film as an executive producer, alongside Phil Daniels, Jim Broadbent and Jonathan Price. She won the Variety Club of Great Britain’s 1980 Film Actress Of The Year award and was also nominated for Best Newcomer. Hazel O’Connor wrote and performed all the songs for the film and the best selling album (produced by Tony Visconti) was also nominated for a BAFTA for the Best Film Soundtrack.

Her next album Sons and Lovers spawned the hit Decadent Days (aka D-Days). When she performed the song on Top Of The Pops, she shocked the nation when she stripped down to her black bra and miniskirt. In spite of the hit singles and sold out concert tours, storm clouds were gathering as the contracts that Hazel had signed with her label and publisher were fundamentally flawed and despite the millions of records sold, Hazel was headed for bankruptcy.

So she turned to her other talent, acting, and starred in the BBC drama series “Fighting Back”, co-starring with Derek Thompson, of Casualty fame, who was also member of the Breaking Glass cast. The series received rave reviews and Hazel left on a high to live in Los Angeles. She married, continued her career in the States but, at the beginning of the 90s, after a skin cancer scare, moved to the home of her forefathers, Ireland, where she remains based to this day.

In the early 90s, she signed a new deal to Sony Germany and recorded the albums To Be Free, Over The Moon, and Private Wars (producer Paul Barrett), which were successful in Germany, France and throughout the European continent. When the Sony deal expired, Hazel decide to take control of her life and recorded the Live In Berlin album followed by a new studio album, Five In The Morning. After the last big band tour in 1998 to promote Five In The Morning, bass player and good pal, Herbie Flowers (Sky, Lou Reed’s Walk On The Wild Side) encouraged her to tell her life story in a show. “Go to the Edinburgh Fringe” he urged; and thus, Beyond Breaking Glass, the show, was born. Working with harpist Cormac De Barra, the show has played to critical acclaim all over Europe as well as USA and Australia. Out of the show, came the album.