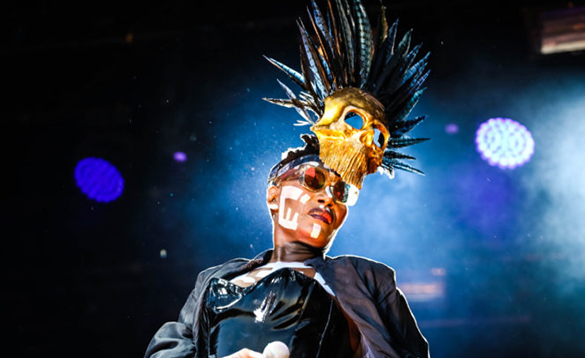 Grace was raised in a Spanish town in Jamaica and is the daughter of a Pentecostal minister. In her early teens she moved to Syracuse in New York where she studied theatre and drama. After leaving New York for Paris she became a famous model. Her success in Paris soon multiplied – Grace Jones was now an international star.

She lived and worked with fellow star, Jerry Hall, for several years until she met producers Trevor Horn and J P Goude, the men who directed her career towards recording. In 1977 they recorded the international hit La Vie En Rose. With the success of her recording venture now flowing, J P Goude decided to produce The One-Man Show, an outstanding world tour.

Off the road and into the studio in 1980 to record her next offering, the album Warm Leatherette.

Her hits dominated the world charts in 1981/82 with singles such as Pull Up To The Bumper, Walking In The Rain, I’ve Seen That Face Before (Libertango), I’m Not Perfect, Nipple To The Bottle, My Jamaican guy, Private Life.

Once again Grace’s 1985 album Slave To The Rhythm climbed the album charts and scored a string of worldwide hit singles with the title song selling 4 million copies.

With her worldwide appeal Grace was then ready to push her career towards movies. After wading through piles of film scripts, Grace decided on a part in Conan The Destroyer. She also starred in the 1985 James Bond movie A View To A Kill and Eddie Murphy’s 1991 blockbuster Boomerang.