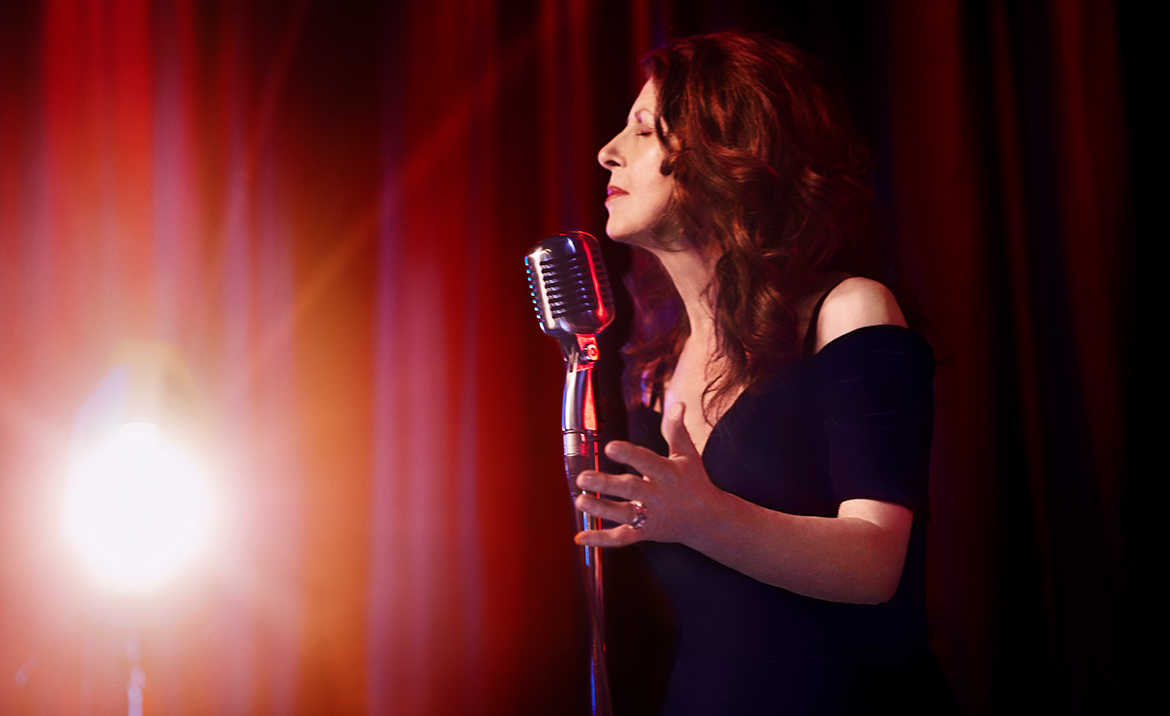 Long before the end of a live show and the frequent standing ovations that accompany it, there comes a point where Elkie does something so amazing that it leaves her audience almost spellbound.

It could be a particularly emotional rendition of one of her ballads, a powerhouse blues vocal or one of her trademark impossibly long notes that leaves the audience mesmerised. Ray Coleman, the editor of the Melody Maker, summed that moment up brilliantly many years ago when he said ‘Midway through a haunting rendition of Lilac Wine you realised you were not witnessing a merely gifted singer but were in the presence of a superstar’. And at every concert there comes that palpable moment when the audience are left almost shell shocked and even Elkie herself knows she has done enough to leave no one unimpressed. Bathing in the glow of applause that follows Elkie will often say:

And that is the story of her last 50 years on the stage – It is not the arrival but the journey. In her mind she is always striving for perfection and by god it’s good to watch her as she tries. Most truly great artists never recognise what it is that makes them great and Elkie is no exception. To this day, she constantly strives to improve her vocals, her song writing and her performances. Never one to reflect on past successes, Elkie is known to dismiss some of her achievements and recordings by saying ‘I could do it so much better now’.

She started in the business fighting to be heard and fighting for recognition, she fought hard for her audience, fought to be heard over bad bands, bad songs and bad management but she never gave up, she always carried on her career not really knowing where it would lead. It is this steely determination and hardened work ethic that has brought her legions of followers and allowed her the rare luxury of a loyal fan base 50 years after she started out on what has been and continues to be an incredible journey.

The first step in her musical career started in 1960, when at the tender age of 15, the young Elaine Bookbinder entered a very early reality type show at Manchester’s Palace Theatre that promised to put the winner on a national pop package tour. Elkie was that winner, and that was the start of her life on the road and year one of the 50 year trip.
The 60’s saw her struggling to find direction. She started out making a name for herself with Jazz, Blues and R&B which she loved and which inspires her every performance to this day. Success at this time eluded her and she was forced down ill-conceived pop routes that would lead to dead ends and for which she had no enthusiasm.

In the early 60’s before she had got out of first gear, she was contemplating giving it all up.  Just to pay the rent Elkie endured the cabaret circuit, lightweight pop songs, being packaged as a pop starlet and the pressures from managers which all combined to make her deeply unhappy and to even doubt her own abilities. Her morale was low and the will to go on was wavering.

Around this time the late great Humphrey Lyttelton invited her to be the guest vocalist with his renowned jazz band and here she came into her own, finally finding a direction she was comfortable with.  It was Humph and her love of Jazz that guided her on the road and gave her back the confidence and the belief that one day she would get there.

Her relationship with Humph would last the rest of his life, they went on to make albums and perform together on and off for over 40 years.
Elkie was deeply touched and honoured to help Humph on his final journey when after singing at his funeral in 2008 she was asked to scatter his ashes from a paraglider over the North Devon coast which she has made her home.

Towards the end of the 60’s Elkie started to explore even more new directions and found herself in the Rock/Jazz fusion band Dada. Dada progressed into the hard rocking freewheeling R&B Vinegar Joe where she shared lead vocals with the late and highly talented Robert Palmer.  Elkie loved this direction, she threw herself into rock and became one of, if not the original ‘in your face rock chick’. The band achieved a huge cult following throughout Europe, the rock press had noticed her unique and raucous vocals and she was regularly tipped by those in the know as the ‘next big thing’. The Melody Maker went as far as making her the Face of 1973 and she almost  arrived big time, but with the break up of Vinegar Joe her journey in that particular direction came to an end.

Her next step was a very brief foray into the acting world when she took the lead in Adrian Mitchell’s TV drama, Something Down There Is Crying, playing a singer who battled the drink fuelled excesses of the 70’s music scene.

Everybody in the industry knew she was a talented performer who could sing almost any style of music but nobody really knew in what direction she should go next, should it be jazz, blues or rock?

The answer came in 1977 with a song that transcends genre’s and married all of Elkie’s vocal abilities and 17 years of hard work into the million selling Pearl’s A Singer. Her journey was now rocket powered, she jumped in one leap from singing in pubs and clubs to selling out the Royal Albert Hall. By the end of the 70’s, more hit singles and hit albums later, she was on course for superstardom.

As her career flourished, so did her personal life when Elkie was joined on her journey by illustrious sound engineer Trevor Jordan. They met and married in 1978, and in 1979 just two weeks after a massive tour their first son Jermaine ‘Jay’ Jordan was born.

Even to this day Elkie comes as a package with the family behind her, supporting and guiding her and practically living on the road. Her frequent touring took her to every major venue in the country and led to appearances worldwide. Success followed success and in the early 80’s her two Pearls albums broke all records. Together they stayed in the charts for an incredible 105 weeks and Pearls became the biggest selling album by a female artist in UK history at the time.
To the public, the press and the music industry she had well and truly arrived, there were no more goals to achieve or mountains to climb, she had scaled them all except perhaps her long standing desire to be known in America. But was the lady content to coast along the road? Not for one minute. Against opposition from managers, promoters and record companies she was already planning a change of direction and material that would take her back to her rock roots.

Elkie was now in a league of her own, with the confidence and success to do her own thing. She wrote and recorded rock and orchestral albums and in 1986 eclipsed the success of Pearl’s A Singer with her biggest hit single to date No More The Fool. This was yet another new peak when simultaneously Elkie held the top 5 single, top 5 album, the top 10 album and gave birth to her second son Joseph Jordan all in one week.

By the end of the 80’s, Elkie decided to continue her journey with just herself and her family, she dispensed with the trappings that surround a contracted recording artist and set about exploring new avenues and directions. The 90’s saw a run of pure jazz, unplugged and blues albums, all made from her home studio in Devon where she could work and enjoy her privacy, only interrupted every year when the whole family set out on a massive three month concert tour.
By 1997 she had achieved 15 hit albums and a new milestone on her road was marked, when the Guinness Book of Records confirmed Elkie as having more top 75 albums than any other British female artist in the last two decades.

In recent years Elkie’s career has taken her in many different directions, from contemporary to traditional jazz, and even to Nashville for some country flavoured inspiration.

Now in 2010 almost thirty years since her last album of ballads and the sort of material that made her a household name, Elkie has decided to record an album of love songs and dramatic power ballads which includes the title track Powerless written by the legendary Don Black.

Reviews of concerts in recent years, usually by critics that were not even born in the 70’s, are all highly complimentary and focus on the facts that ‘she can still do it, the voice is still there, she can still hit the notes’ etc. which is all very nice. But if only they realised that through 50 years of singing every day, constant touring and her desire to improve herself, technically the voice has grown, the range has grown, the power has increased and the control is absolute. There is no question that she can ‘still do it’.
She is doing things she never could before and when she looks back at some of her old work and says ‘I could do it so much better now’ she is only stating the obvious.

Whilst the raw mechanics needed for a singer to sing are all in the best shape they have ever been, that is not what makes Elkie the singer she is today.  She has fought long and hard and that fighting spirit, that grit, determination and raw emotion are evident in every song she performs. She has the technical ability to take it easy and coast through any song making it sound as good as the recorded version. But she never takes the easy route, she immerses herself totally in the song, singing with a passion and depth of feeling few can match and the sheer joy is there for all to see.

The incredible journey of Elkie Brooks has reached a milestone of 50 years but she has not finished her travels yet. She is fighting fit, looking bloody amazing and more excited to be performing than when she first set out on the road. She is in full flight, all guns blazing, still aiming higher and it will be an honour and a privilege to watch any part of this unique journey.

Elkie Brooks – Pearls – The Very Best Of is out on May 26th.

On the 19th September see Elkie Brooks at the London Palladium. For further details click here.