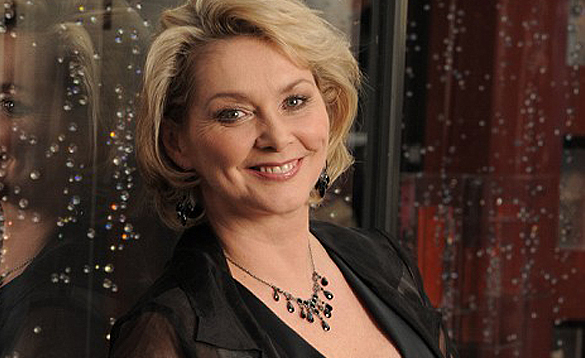 A real life Eastender, Cheryl was born in Bethnal Green on 8th March 1954, Her bubbly personality was evident even in the early days of “Bucks Fizz” when they won the Eurovision Song Contest in Dublin in 1981. They went on to gain world-wide recognition with a string of hit records including three number ones, “Land of Make Believe”, “My camera Never Lies” and of course “Making Your Mind Up” and throughout this period, it was evident that Cheryl would develop a solo career one day. In 1984 she was asked to present the children’s television show, “How Dare You”, which set the ball rolling for her as a TV presenter. Apart from children’s favourites such as Record Breakers and Eggs ‘n’ Baker, she presented daytime current affairs shows, prime-time Saturday evening shows and even dog agility shows! During the 90’s, Cheryl was on TV 6 days a week! All this and she was still singing with Bucks Fizz. So, at the end of 1993, Cheryl stepped down from Bucks Fizz after twelve years to concentrate on her solo career
She is hugely popular with the general public, who consider her ‘the girl next door’. Whenever she makes an appearance either in the Media or at events, her charm and personality has everyone, young and old, eating from her hand. People relate to Cheryl – she is ‘one of them’. Cheryl is far from perfect and people love her for it.
Cheryl reunited with Mike Nolan and Jay Aston, and the three works together performing all their Bucks Fizz hits. They perform at major festivals throughout the UK and are regulars on the “Here & Now” tours. And yes – they still rip their skirts off!
she has just appeared in the new series of Celebrity Master Chef
Cheryl continues to work with Mike Nolan and Jay Aston from the original line-up of Bucks Fizz
TV shows so far this year: Celebrity Pointless, Celebrity DIY, Britain Then & Now, Greatest Talent Show Moments, Countdown x 5 episodes, History of the Eurovision, The Late, Late Show (Ireland), Alan Titchmarsh Show, Lorraine, Vanessa, OK TV, Cruise Today, The Wright Stuff, Loose Women, This Morning, All Star Family Fortunes and Pop Star to Opera Star x 6,
Cheryl feels it is a privilege to help charities whenever possible and is involved with many, especially children’s charities .Cheryl had to have IVF to conceive her twin daughters, and was happy to talk about it openly as she felt it could be of some help to other women. Consequently she is patron/supporter to almost every infertility charity in the UK! Most recently she has been appointed Vice-President to the Royal London Society for the Blind and has been made Patron of the Lollipop Appeal, a charity to raise funds for a high-dependency unit for very sick children. She is also in the early stages of launching another charity, “The Car For Cots Appeal” which is in conjunction with her children’s school, Hillview School For Girls in Tonbridge, of which she is Vice-Chair of the PTA. To raise funds they will be selling raffle tickets to win a Chevrolet Matiz and the proceeds will (hopefully) buy an incubator for the Special Care Baby Unit (SCBU) for premature and very sick babies at Darent Valley Hospital in Dartford. She was one of the founders and is a trustee of HEADFIRST, a charity which raises funds for research, equipment and care of people who have suffered brain damage due to accident, stroke or disease. This charity was set up following the horrific coach crash back in 1984 when Cheryl was in Bucks Fizz, where her colleague and dear friend, Mike Nolan, sustained serious head injury resulting in brain damage. On 6th June she will host a Casino Evening at the RLSB with all proceeds going to Headfirst and RLSB.
Cheryl is currently campaigning for cleaner NHS hospitals, after the very sad death of her mother-in-law through the super-bug ‘C-Diff’, contracted whilst in hospital.