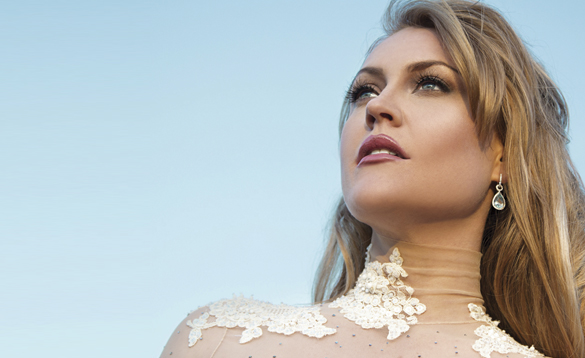 Camilla Kerslake, the Classical Star with A Heart As Big As Her Voice

After a meteoric rise to fame and her eponymous first album making her the best selling English soprano of the decade, Camilla enjoyed an incredibly successful few years including being made “The voice of Waitrose”, performing for TV audiences of hundreds of millions and recently becoming the first female crossover star to perform in an opera, “Life from Light”.

The first signing of Gary Barlow’s Future Records, Camilla has had the great good fortune to sing for the Queen and an audience of 140,000 people at the Epsom Derby, the National Anthems at Wembley Stadium for the football Carling Cup Final and Rugby League Challenge Cup Final, the Rugby League World Cup opening ceremony at the Millennium stadium, numerous performances for England Rugby Union at Twickenham stadium and charitable performances in the presence of the Royal family at Buckingham Palace, Windsor Castle and The Houses of Parliament.

Camilla was lucky enough to be included in Cameron MacIntosh’s epic 25th anniversary dream cast revival of Les Miserables at the O2, alongside tenor Alfie Boe, film star Samantha Barks, Nick Jonas, Matt Lucas and Lea Salonga. She counts her West End debut as a highlight of her young life and remains the only crossover soprano to have a west end credit to their name.

Camilla completed an arena tour with classical superstar Andrea Bocelli, performing twice at the 02, as well as sellout concerts at the Hammersmith Apollo with crossover mega group Il Divo. She has accompanied Russell Watson for two tours and accompanied triple platinum selling artists The Priests on a UK and Irish tour. She has performed many times at The Royal Albert Hall including a poignant performance for the festival of remembrance in the presence of Her Majesty and family and a classical Brit awards performance of Nessan Dorma with Blake and Howard Goodall, which became the ceremonies first official charity single.

Camilla was invited to open ITV’s hit show Pop Star to Opera Star and has performed over 30 times on National T.V. Camilla’s work for Teenage Cancer Trust saw her getting soaked by Keith Lemon and ultimately winning ITV’s prime time show ‘Sing if you can’ raising over £800,000. Camilla also flew to Northern Ireland to perform at BBC’s Children in Need.

In June 2011 3 months after her critically acclaimed second album ‘Moments’ was released Camilla chose to step out of the limelight, cancelling a UK tour when her mother was diagnosed with Breast Cancer. After an 18 month sabbatical caring for her mother Deborah, Camilla began tirelessly campaigning both for the Royal Marsden, who saved her mother’s life and Breast Cancer Campaign whose fundraising enabled them to do so.

With Deborah’s health restored in late 2013, Camilla stepped back into the spotlight for the unveiling of the pinnacle of her last few years charity work; the release of her single ‘You Raise me up’. Featured on the track are Classical Brit winning trio Blake and the Sing 2 Beat Breast Cancer choir, comprised of 21 wonderful Breast cancer sufferers/survivors, and founded by Kerslake and her mother. All proceeds went to the Campaign and combined with an incredible performance at the ‘The Pink Ribbon Ball’, raised over £300,000 for the charity.

This Mother’s day Camilla had a breast cancer scare of her own and thankfully the lump was cleared this August. Following this shock, Camilla has been further inspired to perform at the Breast Cancer Care fashion show and the prestigious Inspiration Awards for women.

This year Camilla has been busy completing international tours of Bali, Norway and a breast cancer fundraising tour of New Zealand, which coincided with the England rugby team’s summer tour there. She has also performed at many “last night of the Proms” events and made her operatic debut in Toni Castells contemporary masterpiece “Life From Light”.

Camilla is currently touring the UK and is in the midst of recording her third album, set for release spring 2016. This December Camilla is due to headline the Asia Pacific Classical Music festival in Kuala Lumpur, alongside a host of charity ball performances and carol services throughout the Christmas period. Camilla also looks forward to a two week tour of the Caribbean in the New Year.