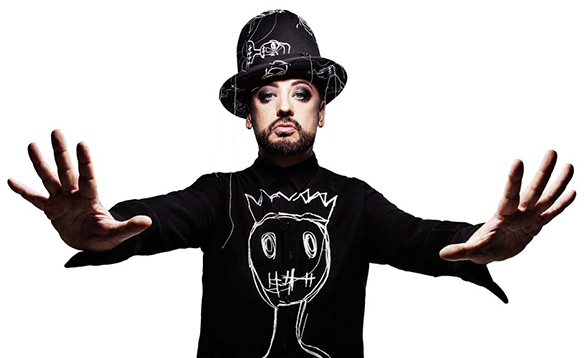 Boy George needs little introduction. He first shot to international stardom in the 1980’s as the front man of one of the UK’s biggest exports – Culture Club. He has sold over 50 million albums and has had top 10 hits in every country. Singer, actor, DJ, artist, photographer, fashion designer, he has constantly reinvented himself and remains today one of the world’s most recognisable iconic figures.

As the front man of Culture Club – a band that mixed new wave and George’s blue-eyed soul with rock and reggae – George took centre stage with his wild outfits and elaborate makeup. His inimitable style and soulful voice brought the attention of audiences on both sides of the Atlantic. His daring style, musical talent and unique persona attracted famous fans such as Andy Warhol and Keith Haring.

The band released its debut album Kissing To Be Clever in 1982. The album’s third single, Do You Really Want to Hurt Me? reached #1 in sixteen countries and #2 in the United States. Quickly followed by Time (Clock Of The Heart), which reached the US #2, and I’ll Tumble 4 Ya, which reached #9, this made Culture Club the first group since the Beatles to have three top 10 hits from a debut album. The group’s second album, Colour By Numbers produced what was arguably their biggest hit, Karma Chameleon. George and Culture Club sold in excess of 100 million singles and over 50 million albums – there was not a country in the world that didn’t know the names of Boy George and Culture Club. George was photographed by everyone from Richard Avedon to Lord Snowdon to Steven Meisel.

In 1987 George launched his solo career with the album Sold, which saw several hit singles in the UK, including the number 1 Everything I Own. Over the next five years, Boy George would release four more albums; Tense Nervous Headache in 1988, Boyfriend in 1989, High Hat in 1989 and The Martyr Mantras in 1991 on his own label, More Protein. 1992 brought him his first substantial hit in the US as a solo artist, a cover of The Crying Game for the movie of the same name. The song was produced by the Pet Shop Boys and reached the top 20 in the Billboard charts,and was nominated for a Grammy Award.

Boy George’s prolific song writing continued with Cheapness and Beauty in 1995 and The Unrecoupable One Man Bandit in 1999, with several unreleased recording sessions in between. When Will You Learn was also nominated for a Grammy in the Best Dance Recording category.

Then, beginning in 2001, Boy George helmed the production of his hit musical, Taboo. Performances ran both in London and on Broadway through 2004 and the score was nominated for a Tony Award.

Following Taboo Boy George returned to live work and DJ, he was back on the road doing what he loves best – singing live… stripped down, acoustic, unplugged. He wowed audiences and critics alike.

2010 gave Boy George the opportunity to work with Mark Ronson. Somebody to Love Me is taken from Mark Ronson’s newly released critically acclaimed CD, Record Collection, and has already been picked out as the highlight track and will be released as a single on 6th December. Mark said: “I wanted to make a song like Do You Really Want To Hurt Me so I decided to get him involved. He was a true professional. It’s turned out to be an amazing track… it’s probably the best. George’s voice still has that innocence, but now it’s like a weather- beaten instrument.” And George: “I really enjoyed working with Mark, he is super cool and laid back in the tudio which suited me perfectly. It’s obvious that he loves the whole vibe of the 80s but I also think he just loves anything that hints of style and integrity.”

Mark and George are also in talks to re-unite Culture Club for their 30th Anniversary in April 2012 with talks of a new album and world tour. Culture Club recently took the two top spots in a MTV/Absolute Radio polof the Greatest Songs of the 80’s with 1. Do You Really Want To Hurt Me & 2. Karma Chameleon.