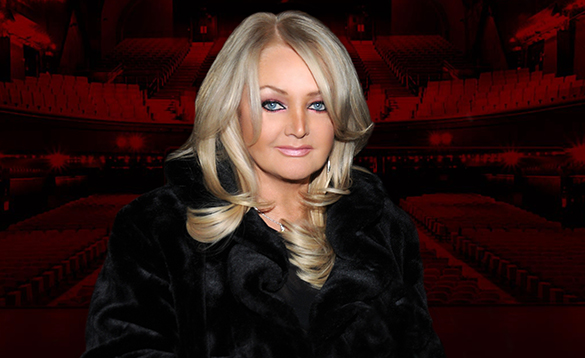 With a career spanning four decades, and a voice instantly identifiable the world over, Bonnie
is the international first lady of rock. Born in Skewen, Neath, South Wales, Tyler grew up
listening to, and being influenced by, the legendary female artists of the day, especially Janis
Joplin and Tina Turner

Bonnie’s breakthrough hit was her second ever single “Lost In France” which climbed to No.9
in the UK charts. The track was then released in Europe and became a huge hit, staying in the
Top Ten in Germany for over six months. “It’s A Heartache”, Bonnie’s next single was her
first hit in the USA, reaching No. 3 in the Billboard chart, and was a massive hit all over the
world.

The 80’s saw even greater success. A burgeoning collaboration with epic rock pioneer Jim
Steinman garnered both Grammy Nomination and phenomenal international recognition with
the album “Faster Than The Speed Of Night”, and multi-platinum selling power ballad “Total
Eclipse Of The Heart”. Continuing their working relationship – “Holding Out For A Hero”,
from the soundtrack to the film “Footloose”, proved similarly popular and has also featured in
several other movies since including the Shrek series.

In the 90’s Tyler worked with “the German Simon Cowell” writer/producer Deiter Bohlen
giving rise to albums including the monster German hit “Bitterblue”.

Bonnie was impacting the European market so much that in 2003 she recorded a dual-language
cover of “Total Eclipse”, with French artist Kareen Antonn titled “Si demain (Turn Around)”
which topped the charts in Belgium, Poland and France, the latter for ten weeks.

Both “It’s a Heartache” and “Total Eclipse of the Heart” are among the best-selling singles of all
time, with sales in excess of six million. Bonnie’s work has earned her two Grammy
Award nominations and three Brit Award nominations, among other accolades.

Bonnie’s current album, Rocks and Honey, which was recorded in Nashville and Produced by
David Huff, is now available from iTunes and amazon.co.uk.