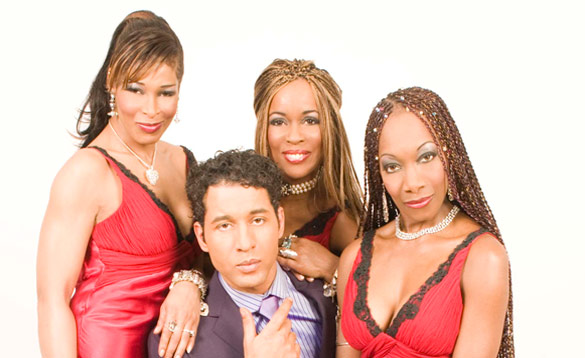 Everyone knows the name, everyone knows at least one of their songs. Now meet the very original member Maizie Williams.

The success of the group is the result of producer Frank Farian recording a song in 1974 entitled Baby Do You Want To Bump and releasing it under the pseudonym of Boney M. By the end of the year television stations and clubs wanted to see Boney M live. The producer did not want to go on stage so he used an agency to find three girls and a guy. Thus the first Boney M line up with Maizie Williams.

This line up was used for press appearances and live shows. Later the line up was to change with Maizie Williams being the only woman to stay and become part of the official four-piece line up. She was then joined by Marica Barrett, Bobby Farrell and Liz Mitchell. The group went on to have worldwide hits with songs such as: “Daddy Cool”, “Ma Baker”, “Rasputin”, “Rivers Of Babylon”, “Brown Girl In The Ring” and many more.

Maizie, there from the very birth of Boney M is now touring the globe after the success of the remixed back catalogue The Greatest Hits Of Boney M and Boney M 2000, which includes some of the best loved hits remixed by the world’s top DJ’s. It was obvious from the vast number of record sales that the magic of Boney M is still alive and being enjoyed by all generations.

Audiences worldwide have been thrilled by the energetic visual performances of all their well-loved songs. Maizie most definitely the M in Boney M, has revitalized the songs live, while keeping the same lyrics, giving the songs a new modern sound that will have all generations toe tapping, clapping and jumping up and down to the new melodic beat.