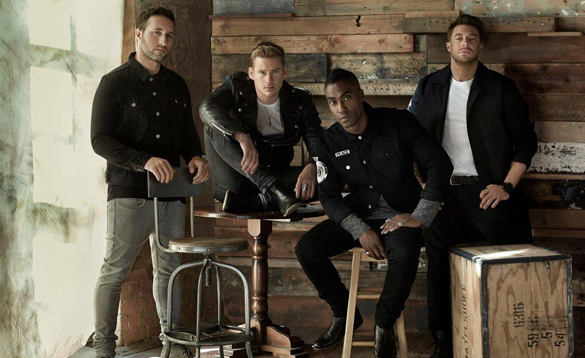 With nine top 5 singles and three No 1 albums, Blue are one of the most successful boy bands of all time.

Antony Costa, Duncan James, Lee Ryan and Simon Webbe originally formed the group in 2000 and released their debut single “All Rise” in May 2001, which reached number four on the UK singles chart. Their next two singles “Too Close” and “If You Come Back” shot to No 1 and their debut album All Rise also reached the top of the charts, eventually selling in excess of 1.8 million copies in the UK.

The group success continued with their next album One Love, which also peaked at No 1 and featured a collaboration with Elton John on a new recording of his hit “Sorry Seems To Be The Hardest Word”. Less than a year later, they released yet another No 1 album Guilty which included another collaboration with a music icon, this time Stevie Wonder on the track “Signed Sealed, Delivered, I’m Yours”.

As well as achieving incredible success in the UK, the group became renowned in many other countries including Ireland, Portugal, Belgium, Italy, France, Australia and New Zealand.

After a compilation album, Best of Blue reached number 2 in the charts, the group decided to go their separate ways, pursuing their own solo careers. The hiatus lasted until 2011, their 10th anniversary, when they reunited and went on to represent the UK in the Eurovision Song Contest 2011.

In 2013, Blue played over 170 shows and events, in more than 21 countries. Blues next album Roulette saw them collaborate with Grammy- winning producer RedOne, who has crafted global hits for Lady Gag and Nicki Minaj.

The band embarked on a national sell out tour in 2014/15, showing that they still have legions of fans who are behind them 100%. Blue are currently preparing for their 15th anniversary and are ready to embark on a host of exciting new opportunities.