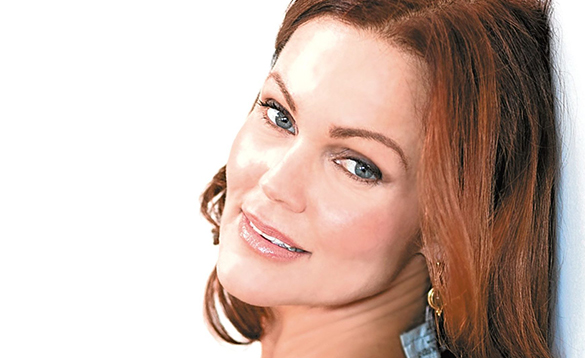 If ever anyone has given Madonna a run for her money as the queen of the three-minute pop song, it’s Belinda Carlisle. Over the last two decades, she’s made the journey from Hollywood-based teen punk with the Go-Gos to the ultimate global big hair pop icon with a series of sophisticated, but instantly memorable pop-rock singles. All of which are included on… A Place on Earth – The Greatest Hits.

Like the Material Girl, Belinda’s career can be pinned down to determination and bags of self-belief: “Over the years I’ve learnt that everything is possible and my career is a testament to that way of thinking. I’ve never let doubt or any negative thoughts interfere with my dreams,” says Belinda “I’ve been making records for 22 years and the longevity says something. I’m very proud of my career.” Born in August 1958 in Hollywood, Belinda was brought up on a strict diet of Californian pop radio and she embraced everything from the Beach Boys to Roxy Music. “Music has always been an escape for me. Growing up, I eventually found the alternative to what I hated on the radio, I discovered Iggy Pop. I always say I wouldn’t be here without Iggy Pop.”

After a short stint as a drummer in the legendary Germs, Belinda Carlisle helped form the Go-gos. Together they scored in every sense of the word, and with a string of hit singles including We Got The Beat and Our Lips Are Sealed and a double platinum debut, Beauty And The Beat (making them the first girl group to top the US albums chart), they broke down barriers for female bands in the music industry. “I do believe the Go-Gos had a lot of impact on musical history, I know that to be a fact in the states anyway.”

But it was with Heaven Is A Place On Earth that Belinda achieved international success. With a video directed by Diane Keaton and co-starring husband, Morgan Mason, it was a number one on both sides of the Atlantic and helped to establish her as a solo artist in her own right after the demise of the Go-Gos in 1985. “Heaven is not just a song; it’s one of those moments in one’s career that don’t come around too often. It had the right sound at the right time. It’s one of those unexplainable things,” she says.

“Heaven” was a collaboration with writers Rick Nowels and Ellen Shipley who’ve written many of Belinda’s biggest hits including, Circle In The Sand, (We Want) The Same Thing and Do You Feel Like I Feel?, all featured on… A Place on Earth – The Greatest Hits. Over the years, her choice of songs has not only been instinctive but one of her best assets: “The melody is the first thing that draws me to any song, but then I have to be able to relate to the lyrics. For the most part, they’re songs in the vein of those that I listened to on the radio from morning until night when I was little. There’s the indie side to me and there’s the melancholic side.”

The 1986 album Heaven On Earth included the hits, Circle In The Sand (No 6), I Get Weak (No 10) and World Without You (No 34), the latter two tracks both written by the legendary Diane Warren, “she’s gone on to become mega – successful, but she was very, very successful at that point. It was a privilege to record her songs.” Heaven On Earth’s success was, Belinda says, “a dream come true”, and saw her honing her style as an immaculately polished purveyor of perfect pop.

Belinda Carlisle returned to the uplifting and inspirational territory that has become her trademark with the singles, Leave A Light On (No 4), La Luna (No 38), We Want The Same Thing (No 6) and Summer Rain (No 23), a personal favourite. “It’s an unusual song about losing somebody in the war. The first time I heard it, I loved it and the drama of its orchestration.”

The singles were taken from the 1989 album, Runaway Horses, which spent 18 months on the UK charts. A year later, Belinda Carlisle touched base again with the Go-Gos to support one of her pet causes, PETA (people for the Ethical Treatment of Animals) and to release the album, The Greatest. The reunion was short-lived but highly praised.

The album Live Your Life is free followed in 1991. As did the hits. The anthemic title track (No 12) and catchy Do You Feel Like I Feel (No 29) paired Belinda with the Rick Nowels and Ellen Shipley writing team once again while Little Black Book (No 28) and Big Scary Animal (No 12) saw Belinda step into the role of co-writer for the very first time.

A baby (James Duke, born April, 1992) meant a break from recording but Belinda’s return album, A Woman And A Man in 1996, saw her in a more mature mode though still with the same pop sensibility. The singles were as radio friendly as ever: In Too Deep hit (No 6), California (No 31), Always Breaking My Heart, written by Roxette’s Per Gessle – (No 8) and Love In The Key Of C (No 20). Nineteen-ninety-nine and the Belinda Carlisle story is far from over …A Place On Earth – The Greatest Hits comes with three bonus tracks which, in her true style, sound just as great blasting from a Californian car stereo as they do in the comfort of your own home.

The track Feels Like I’ve Known You Forever saw Belinda work with Johnny Douglas, while All God’s Children and A Prayer For Everyone are very timely. “With the new millennium, a lot of people are thinking about the way the world is headed and searching for a new way of living. The two songs reflect that attitude,” she says.

These tracks see Belinda Carlisle working with producer Brian Rawlings, responsible for multi-million selling single ‘Believe’ by Cher. “I love that song,” she admits. “I thought the production was great. I never will be a dance artist, but I don’t think there’s anything wrong with taking certain elements from the production and bringing them to what I do. Apart from the melody, the song has a dramatic lyric about meeting your soulmate. I could relate to that: I met my husband, on the first date we decided to get married and I moved in the next day.”

Likewise, the secret of her success is a combination of instinct and fate: “I’d say it’s been my destiny to have this career,” reflects Belinda, “I also think that though my voice is not great it’s distinctive. But most importantly, I have a really good talent for choosing hit songs.”

An Album of Classic French Chansons and Pop Standards, Carlisle’s Rykodisc Debut was released in 2007. Belinda Carlisle’s Voila!, her first new album in a decade, and her first record sung entirely in French, is a radical departure for the pop diva and lead singer of the Go-Go’s. Working with producer John Reynolds (U2, Sinéad O’Connor, Indigo Girls, Hothouse Flowers), Carlisle has fashioned a traditional pop album that pays tribute to the classic French chansons and pop music of the ’40s, ’50s and ’60s. Just in time for Valentine’s Day, the album is set for release on February 6, 2007.

More recently Belinda Carlisle has been touring the world performing her hits, she took part on the UK Here And Now Tour in 2002, and The Here And Now Australia Tour, and 2011 will see her touring all points of the globe from New Zealand to the USA, Europe, Japan and the UK, and appearing on the 10th anniversary Here And Now Tour.